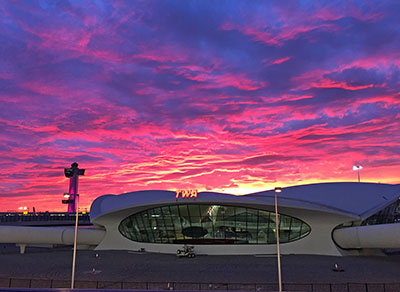 The sunset only lasted for a few minutes, and it was a beautiful surprise. And a reminder of the simple pleasures in life. Mitch Traphagen photos. 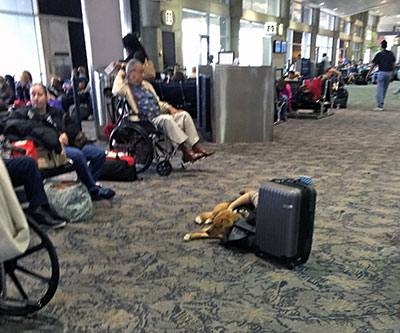 I’m sure that most dogs are emotional service animals. But this young woman’s dog was special. And it made me wonder what could have happened to require the emotional support.

I love the TSA Pre-Check program. I don’t have to take anything out of my bag, or remove my shoes or other odd bits of clothing. It removes a lot of the stress in wondering how long it may take to navigate the usually long lines at security.

And I thought it was really great for a recent flight, because I was running late. I made it through security in minutes only to discover that the flight had been delayed. For two hours. Okay, it’s not fun but it happens.

Oddly enough, I noticed that several of my fellow (delayed) passengers had dogs with them. One in particular was striking. She was a young, beautiful dog with very soft-looking fur. She was wearing a harness that described her as an “Emotional Service Animal.”

It struck me that most dogs were exactly that.

This particular dog was with a young woman named Megan, and he was completely attentive to her. People would pass by and you could tell they wanted to reach down and pet the dog but the dog did nothing to encourage it. He stayed focused on his human.

I wondered what could possibly have happened in Megan’s relatively few years on this planet that caused her to require an “Emotional Service Animal.”

We are an interesting species in a lot of ways. Dogs often seem to have things down better than we do. We complicate the simple; we worry about things over which we have no control. We behave irrationally, in everything from spending money for stuff that we really don’t need to how we interact with others.

As a friend once said, a dog just wants to be in the same room with you. For them, it’s that simple. Well, that and treats. They always like treats.

And they like going outside to answer nature’s call. In fact, it’s kind of necessary, which was becoming a problem as the delayed flight just got delayed further.

So a JetBlue tarmac worker came up and Megan, along with the other people traveling with dogs, followed him to an outside doorway. Apparently dogs have an outdoor restroom at Tampa International Airport. Before long they returned as the flight was delayed again.

A plane showed up at our gate. The gate agents were excited, too — I’m sure they wanted to get rid of us as much as we wanted to get going. And then they disappeared and the electronic sign at the gate changed from “New York” to “Havana.” And sure enough, a whole new group of people appeared, all bound south for Cuba.

Lots of people were worried, and I was among them. I had an appointment in Midtown Manhattan that evening. If I couldn’t make it in time, there would be no reason to take the flight. I went back and forth as to whether or not I should just walk out of the airport and into the Florida sunshine and freedom from the delays, stress and crowds associated with holiday travel. And just when I had made up my mind to do exactly that, another plane showed up. This one really was for the New York flight. Probably few were more relieved than the flight crew who had been stuck waiting along with all of us. At least the passengers got to get off the plane in New York; the flight crew all had other places to go yet that day — one would be flying to Orlando and then to Boston, another to Hartford, and so on.

For all of the stress and the worry, there wasn’t much of a problem. It seemed everyone eventually made their way, people were waiting at the airport to greet some of the passengers and I made my appointment with a few minutes to spare. I didn’t see Megan and her dog leave, but I have a feeling they were on their way home.

The next day I arrived back at John F. Kennedy International Airport in time to see a glorious sunset over the strangely beautiful, abandoned and soon to be gone TWA terminal, a vista that served as a reminder that for all of the hassle, there is a lot about travel that is good, and then I, too, was making my way home, after a quick trip through security.

Home to my wife, and to my emotional support animals … dogs and cats (well, cats do try in their own way). They yelped, jumped and licked when we walked in the door. They didn’t care to hear any travel stories, neither horror nor bliss, nor any stories at all. They didn’t care that in a few days, there would be another flight, perhaps even another beautiful sunset somewhere else. They don’t need to complicate the simple — which is this very moment. They don’t need to worry about what is to come or things they can’t change. They were just happy being in the same room as us.