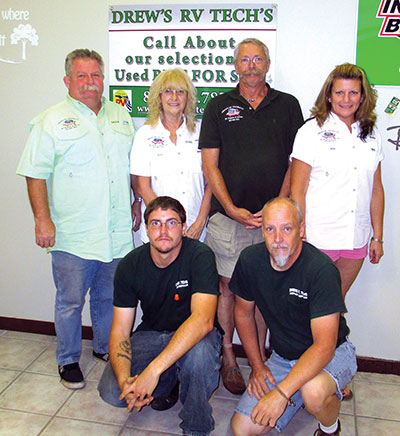 Drew and Lee Anklin grew up in a family of six brothers and sisters and remember spending a lot of family time together in their home near Syracuse, N.Y.

Both were also Boy Scouts and remember camping in the woods as a pleasant experience.

Putting family time and the love of the outdoors together was a natural for Drew, who has now been in the recreational vehicle sales and repair business for most of his life.

After working for a camper company in Syracuse, Drew began to move south, getting a position at Camping World in South Carolina; he then transferred to Bartow.

Eventually he opened his own sales and repair business in Tampa, but recently moved it to Ruskin, opened in November, and was joined by his brother Lee.

“Most of my clients are from the South County area,” Drew said. “It didn’t make sense for me to stay in Tampa.”

Lee had already decided on moving to Apollo Beach after leaving the military, so he joined his brother in the business, as did Drew’s wife June.

Family is important to June as well, and “together,” the couple has seven children.

“Traveling in an RV gives families a chance to get together away from all today’s distractions,” said Drew. “And as the family grows, and then later a couple retires, their vehicle needs change along with their lifestyle.”

For this reason, Drew has set up a one-stop type of operation for people interested in buying a good used RV; buying any kind of supplies for RVs and campers; and even having body or mechanic work on all RV types.

“Another thing is that with Drew’s CDL [truck driver] license, he can go out on the road,” Lee said. “If someone breaks down, getting to us doesn’t present a problem.”

They’ve hired master cabinetry makers and upholsterers and set about revamping the inside of campers and recreational vehicles as well.

The lot ranges from pop-up campers to large vehicles, both with and without attached power trucks. Storage is also available.

“We’re retrofitting a 1962 Airstream inside now,” said Lee. “It was really a top-of-the-line vehicle, and we want to modernize it and give it a whole new life.”

But the business soon grew, and he started adding features one at a time as he saw the need.

“We want to see you keep your travels across American safe and worry-free,” Drew said. “This way, you bring all the comforts of home with you no matter where you go. You’ve picked out what you need. Everyone’s needs are different. I know people who have traveled all over the U.S. and South America, too.”

Families sometimes start with a pop-up, go to a larger camper later as their family grows, then the kids move away and the couple retires, downsizes (or up-sizes!) and travels.

“It’s fun and a way to stay in touch with nature, and with each other,” said Drew. “To get away from electronics for a change.”