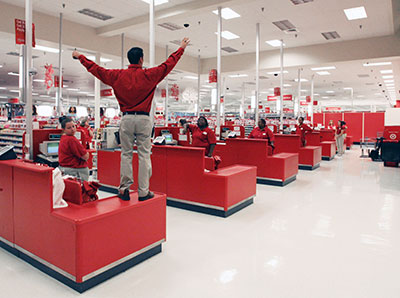 Less than a decade ago, a store manager at Target in Brandon rallied his troops as thousands of people waited outside for the store’s 6 a.m. Black Friday opening on Nov. 24, 2006. Mitch Traphagen photos.

At 10 a.m. on Black Friday morning, an area of Manhattan that is usually a scene of traffic, tourists and shopping chaos was eerily empty. The stores were there and open, ranging from Old Navy and Marshall’s to Diesel and Kate Spade. Sixth Avenue, normally choked with cabs, cars, buses and bicycles, almost echoed in relative silence.

Was everyone home buying from the comfort of their computers from Amazon and other online retailers? It seemed, as many experts and pundits had suggested leading up to the normally big day for retail, that Black Friday had come to an end, the victim of a massive and relatively fast cultural and economic shift.

Then again, perhaps not. By midafternoon, the area around Macy’s flagship store on 34th Street in Manhattan was so packed with people it was nearly impossible to move. The store, which had recently undergone a massive and expensive remodel, partially to highlight high-end brand names, was filled with customers handing over cards and cash. This was no discount store, and the mere sight of the madness strongly suggested that the U.S. economy must be pretty healthy, at least for the seemingly bazillion people shopping inside. 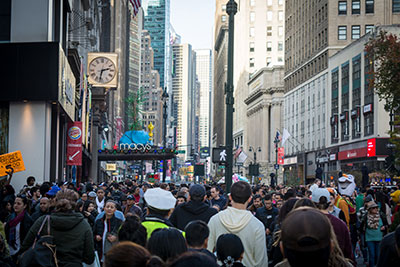 Although pundits have declared the death of Black Friday, and the numbers are bearing them out, the crowd at Macy’s flagship store on 34th Street in Manhattan on Friday suggested otherwise.

Black Friday was effectively born  nearly eight decades ago when the nation’s retailers convinced President Franklin Roosevelt to officially move Thanksgiving Day to a week earlier than the traditional last Thursday of the month. That, the retail organizations argued, would extend the Christmas shopping season. The “black” of Black Friday was a feigned reference to when retail stores would sell so much that they would finally go into the black financially, after struggling through a long year.

Only a handful of years ago, there were news stories about people camping outside electronics and discount stores hoping to score some of the best bargains during the early morning hours on Black Friday. The lines and the camping, for the most part, are gone, and many retailers have extended Black Friday sales into a November month-long event. And, although increasingly controversial, some retailers now open on Thanksgiving Day, further diluting Black Friday sales.

According to retailing research firm Shoppertrak.com, the numbers this year bear out the idea that Black Friday is fading. According to press releases from the firm, sales were down more than $1 billion last Friday from last year, to $10.4 billion. 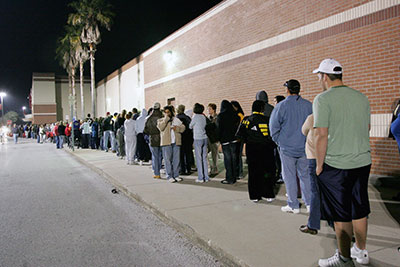 That, however, does not bear bad tidings for the nation’s traditional retailers. The research firm also predicts that holiday season sales could be as much as 2.4 percent higher than last year at brick and mortar stores. In other words, people are shopping earlier and differently than even just a few years ago. Black Friday may be on its way to becoming a fading tradition.

Fading, perhaps, but a tradition nonetheless, as the late day crowd inside Macy’s and in stores around the nation showed. And even though down from last year, Black Friday remains the single biggest shopping day of the year.