Breakfast with a side of three-part harmony 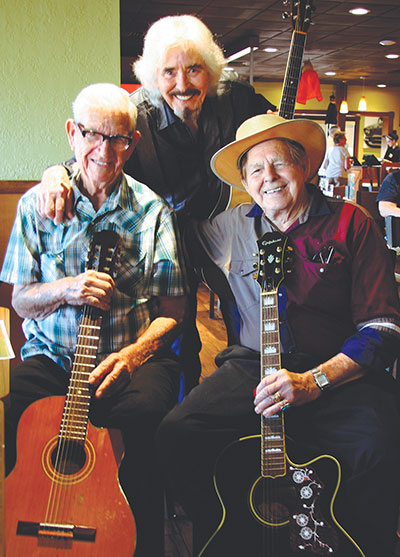 Breakfast at Denny’s in Sun City Center comes with a nice bonus on Monday mornings. In addition to enjoying made-to-order omelettes, scrambled eggs, bacon, sausage and pancakes, diners receive the distinct pleasure of listening to the melodious sounds of three of the area’s most talented musicians: Harold Potter, Ivan Mullins and Frank Mullins, who convene at the restaurant each week to entertain family, friends, and local residents.

Led by 83-year old Harold Potter (known in the area as “The Guitar Man”), the trio spends the breakfast hour strumming on acoustic guitars and harmonizing on such classic country favorites as Willie Nelson’s “Always on my Mind,” Ernest Tubb’s “Walkin’ the Floor over You,” and Kris Kristofferson’s “Help Me Make It Through the Night.”

“I can write songs all day long and never stop,” said Harold Potter. “I know it’s God-given because it comes so easy for me.”

He speaks fondly of his wife of 57 years, Mary Lou, who is the subject of many of his songs, including one he sings at Denny’s titled “Someone Sent Her Roses.”

“Even though she’s been gone five years now, I still write songs for her,” said Potter. “She was my girl.”

“He lives for this,” said Potter’s daughter, Laura Potter Fish, who comes to the breakfast every week with husband Robert and a host of other family members and close friends. “It’s the highlight of his week, and ours, too.”

Accompanying Potter are long-time fellow musicians Ivan and Frank Mullins, brothers who have played together for a lifetime and have honed their vocal harmony so well that it seems effortless.

Growing up in a family of 13 children, the Mullins “always had music in the house,” a trait they carried on throughout their lives and careers.

Ivan, 86, now retired and living in Kings Point, served in the U.S. Air Force for 20 years and used his musical talent to play for the troops in Korea, Germany, Hawaii and Okinawa. He toured extensively around the U.S. and abroad, playing in the European Grand Ole Opry as well the country scene in Nashville. Ivan’s rich, soothing voice is his signature, and makes him a popular performer even today. Each year on Veterans Day, he performs for free at the Riverview Applebee’s for the enjoyment of his fellow veterans.

Ivan’s brother Frank also served in the Air Force and was in Korea during the same time as Ivan. Like his brother, he is deeply rooted in country music and has toured all over the U.S., playing classics by Hank Williams, George Jones, Ernest Tubbs and Willie Nelson. Fans at Denny’s regularly make requests for Frank to sing his pleasing version of “Big City” by Merle Haggard, which he performs in flawless harmony with brother Ivan. 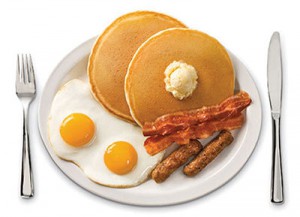 “Everybody is welcome here,” said Potter, echoing a theme that he seems to have carried with him throughout his entire life. He still lives in the same house in Wimauma where he spent the bulk of his life, raising children Glenn, Laura, Jim and Harold Jr., along with great-grandson Randy McNeeley and a host of other youngsters who ended up leaving broken homes to become part of the Potter family.

“Back then, before social services were strong in the community, there were a lot of unwanted kids and abused teenagers out there who had nowhere else to go,” explained Laura. “Dad took them all in, fed them, and cared for them for as long as they needed. Some stayed a few days or a few weeks; others stayed for years.”

Laura speaks matter-of-factly about the generous spirit of love in which she grew up. “We probably raised over 25 kids in our house, and they were like my brothers and sisters.”

She said her parents, Harold and Mary Lou, kept a prayer board in their kitchen to give their “adopted” family hope and spiritual sustenance. “If there was someone without a Thanksgiving dinner or a Christmas tree, Dad would get them one. That’s just the way things were.”

These days, Harold spreads love in a simpler way: Through his music. In addition to his free performances at Denny’s, he also enjoys strolling the aisles at the SCC Walmart, singing and playing for local shoppers.

“If I come without my guitar, they send me home to get it,” he said, laughing. One of his favorite songs is Ernest Tubbs’ “A Daisy a Day.”

“It was Mary Lou’s favorite song,” he says, “and when I sing it, I believe she hears it.”