Observations: We outnumber them 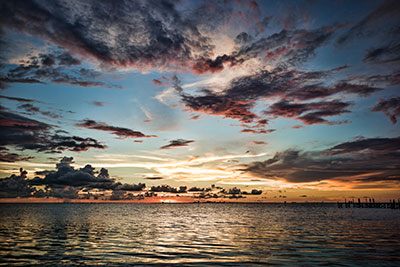 Safety is an illusion, but all we can do is to live our lives. And while the world is sometimes quite ugly, for us, at least, ugliness is generally the exception to indescribable beauty. Mitch Traphagen photo.

Since the last time this newspaper landed on your driveway, or in offices and stores across South Hillsborough, the world has changed. Hundreds of thousands of words have been written about the incomprehensible terrorist attacks on Paris and I have little to add, except for an observation of the one word that resonates: Barbarians.

The locations of the attacks in La Ville-Lumière, or the City of Light, were considered “soft targets.” Which is a clinical way of saying that those killed and injured were innocent people doing innocent things, with absolutely zero expectation of becoming participants, let alone victims, in a growing global war.

Describing the terrorists as barbarians, a word oft repeated since last week, is probably a disservice to barbarians. But such is the limit of language.

What kind of person or people could do this? Who can somehow rationalize through religion or doctrine the slaughter of mostly young people enjoying themselves at entertainment venues? What happened to these people that turned them into soulless, self-absorbed monsters of the worst kind? It is the 21st century, at least in most of the world. How could anyone defend senseless murder as progress, or as even being human?

Paris is a world city, much like New York, London and a small handful of others. On Saturday, the New York Times ran an article about how some people in New York were reconsidering plans made; parents were texting their children with words of caution; and how the attacks in Paris had bled into a return of an underlying fear in this nation’s largest city. If that is indeed the case, score one for the barbarians, because that certainly was one of their goals. Terrorists hope to inflict terror, after all.

In Europe, leaders are gathering to continue talks about the swelling tides of refugees fleeing war-torn, deadly and dysfunctional areas in search of mere peace and a semblance of safety. What was once compassion tinged with concern over the sheer number of refugees has now become a defense issue. At least one of the attackers may — although it had not been conclusively proven at press time — have been among those refugees. One out of thousands … thousands of families, children, mothers and fathers.

And now, understandably, security is at the top of the list. Leaders have a responsibility to protect those they serve, after all. Regardless, innocent people, real people, are being killed and, also understandably, survivors  wish to flee. You would, too. Now an already difficult situation will become far more so. Score two for the barbarians.

I don’t have a solution. Apparently no one does. The only thing I can think of is that the vast majority of the world, those of us who are civilized, must come together to eradicate this scourge on our planet. After all, we all share this blue orb speeding through space, and we have no alternatives in that regard.

The only thing I can think of to fight insanity is through determination and commitment. And yeah, unfortunately, that determination is going to include some pretty heavy airstrikes that will likely also harm innocents.

It’s easy enough for me to write this from the safety of home here in relatively tranquil Florida where there are no fighter jets attacking Apollo Beach (I’ll touch on the helicopters later, Ruskin folks). Unfortunately, and sadly, that is a price for which there is little alternative, barring the good people in barbarian strongholds somehow standing up and fighting back themselves, which from all accounts would amount to suicide. This is a messy planet, and sometimes the best solutions are also tragic, even abhorrent.

This weekend, in the subterranean crossroads that is Herald Square, near the famous Macy’s flagship store on 34th Street in Manhattan, there were armed soldiers standing discreetly as thousands of people rushed off and on to trains. The soldiers, presumably from the National Guard, were not there because of Paris; they are always there and have been since shortly after 9/11. Although certainly Paris was on their minds. If there was palpable fear in America, or at least in New York, it wasn’t apparent. The crowds were still huge. People turned out to honor and think about those lost and hurt in ceremonies at Washington Square Park, with the famous arch lit up in the colors of the French flag. People went shopping, went to shows, walked through parks.

But that knowledge, while very real, should not define our lives.

In September 2001, President George W. Bush was erroneously accused of (and derided for) telling Americans that the best thing they could do, as a wounded nation veered off toward war, was to “go shopping.” The truth is that he didn’t say that, but he did tell people to go on living their lives — which was the best advice he could have given back then.

Yes, the world is a dangerous place. For many people it is a deadly place. We don’t have it hard in comparison but as 9/11 showed, and as the attacks on Paris just days ago showed, sometimes terror can reach even the most unlikely places. There are no guarantees. There never were any guarantees.

President Bush’s advice is still appropriate today. Live your life, cherish your life. Be happy, but also be responsible.

“Terrorists attacked a symbol of American prosperity,” President Bush said on Sept. 20, 2001.  “They did not touch its source. America is successful because of the hard work, and creativity, and enterprise of our people. These were the true strengths of our economy before September 11th, and they are our strengths today.”

“This great nation will never be intimidated,” the President added on Nov. 8, 2001. “People are going about their daily lives, working and shopping and playing, worshiping at churches and synagogues and mosques, going to movies and to baseball games.”

Score one for the civilized.

Remember, think, support that which needs supporting — our armed forces, our first responders and chiefly, a common stand by the vast majority of us on this planet against incomprehensible evil possessed by a deadly but microscopic minority. We incalculably outnumber them. But only together.

And then just live your life. Amid omnipresent danger and occasional ugliness, we are blessed.