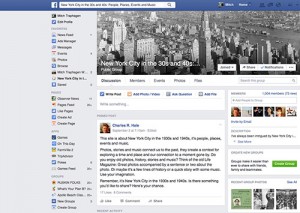 With the Great Depression raging and a world war ramping up, the 1930s and 40s are often largely remembered for their difficulties. People losing all they had, homeless camps, rationing, bread lines, and worse. But that era began a golden age for America, from which it emerged as the world’s most powerful nation and New York City was the center of it. It was also a golden age for glamour, with Fred and Ginger, Bogey and Bacall and so many more.

In the age of instant information and access to nearly everything to the point of overload via the web, are Fred Astaire and Ginger Rogers possible anymore? Do they exist somewhere but are lost in the overload? Or are they gone forever?

For those who lived it and those who are interested in it, there are numerous websites available to revisit the past. One such Facebook site, New York City in the 30s and 40s: People, Places, Events and Music, celebrates that golden age with stories, photos and video clips providing a glimpse into the past with much glamour and some sadness. Will such an era ever be repeated? Perhaps, perhaps not. But if Humphrey Bogart were still around, he might just say, “Play it, Sam.”

That scene and the Facebook page may be found by visiting www.tinyurl.com/observer-glamour.