M.C. Escher on display at The Dali Museum 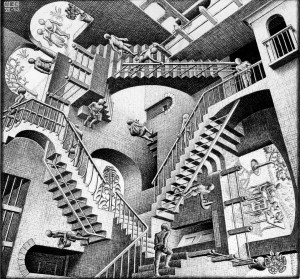 Audiences are finding themselves both puzzled and delighted by “Escher at the Dali,” a special exhibition featuring more than 100 works of renowned artist M.C. Escher. The exhibition is scheduled to run Aug. 22 through Jan. 3 at The Dali Museum in St. Petersburg.

Like Dali, M.C. Escher experiments with the concept of what is real and what is illusion in his artwork, an exploration that can be enjoyed by all ages and all levels of educational background.

“This is our third trip here,” said Marcia Solomon from Sarasota, who, with her family, was enjoying the outdoor “Avant-garden” at the Museum. “It makes for a fun afternoon that the whole family can enjoy and learn from.”

The exhibition features his lithographs, wood blocks, drawings, sculptures, and posters to explain his printing techniques. It includes many of his most famous works, including Reptiles, Eye, Metamorphosis, Ant, House of Stairs, Waterfall, and Hand with Reflecting Sphere, to name a few. 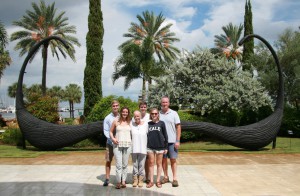 Escher (1898 –1972) was a Dutch graphic artist known for his often mathematically inspired woodcuts, lithographs, and mezzotints that feature explorations of infinity, positive and negative space, and impossible constructions.

“Are you really sure that a floor can’t also be a ceiling?” Escher was quoted as asking.  He enjoyed exploring irrational perspectives, interlocking figures, and mirror images of spheres, cubes, rings and spirals. He also loved experimenting with repeating patterns, or tessellations, which became a common theme in much of his later work.

In his early years, Escher sketched landscapes, nature, and insects, some of which appeared frequently in his later work.   Losing interest in sketching realistically, he turned to drawing landscapes with irregular perspectives that are impossible in reality, created from images in his mind.  Well-known examples of his work include Drawing Hands, in which two hands are shown each drawing the other, and Ascending and Descending, in which lines of people ascend and descend stairs in an infinite loop. 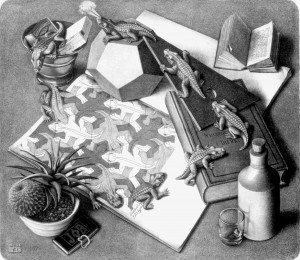 In 1943, Escher created Reptiles, where he combined two and three-dimensional images in a paradoxical and humorous way.  He said the piece was a “visual pun” and had no real philosophical meaning, despite many popular misinterpretations offered by art critics.  Reptiles depicts a desk that holds a drawing of a tessellated flat pattern of reptiles. The reptiles at one edge of the drawing become three-dimensional and crawl around the desk and over objects,  eventually re-entering the drawing at its opposite edge.  Although only the size of small lizards, these reptiles seem to come to life right before the viewers’ eyes, with one even blowing smoke from its nostrils.

Another of Escher’s most popular works was the 1953 lithograph Relativity.  In it, Escher depicts a world in which the normal laws of gravity clearly don’t apply. The architectural structure seems to be the center of a community, with most of its inhabitants casually going about their ordinary business. The structure has seven stairways, and each stairway can be used by people who belong to two different gravity sources.  Inhabitants can be seen climbing the stairways upside-down, but based on their own gravity source, they are actually climbing normally. 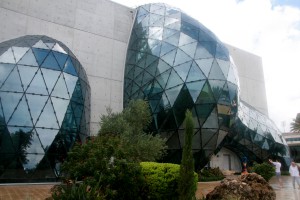 An exterior view of The Dali Museum, taken from the gardens.

Escher’s special way of thinking and the rich graphic quality of his work has had a continuous influence in science and art, as well as being referenced in popular culture. A color version of Reptiles was used in 1969, by the rock band “Mott the Hoople” as their album cover. Posters of his art are sold by the thousands from internet sites, bookstores, and galleries. “My work is a game,” said Escher. “a very serious game.”

“Escher at the Dali,” runs through Jan. 3 at The Dali Museum,  located on the Tampa Bay shoreline in the heart of downtown St. Petersburg. For more information, visit their website at www.thedali.org. or call 727-823-3767.