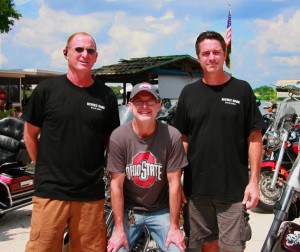 Keeping it in the family are brothers (from left) Randy, Ron and Robert Cremeans.
LISA STARK PHOTOS

Three brothers. Three years.  Add a scenic river locale, dedicated staff, loyal customers,  great food, and popular entertainment, and what you have is a recipe for family success.  “Rivers Edge isn’t just your average bar and restaurant” said Randy Cremeans, who bought the place in Aug. 2012, along with brothers Robert and Ron.  “There are regulars who have been coming in here for 30 years or more.  This is their home ­— really more theirs than mine.”

It is this respect for their loyal patrons and hardworking staff that make Rivers Edge truly fit the definition of “family place.”  The three brothers, who grew up in Central Ohio, have set their roots down in Gibsonton, even though Ron (a diehard Ohio State University Buckeye fan) can still be seen circulating around the property in his scarlett and grey.

“Everybody here is our family, from our customers to our bartenders and cooks and entertainers,” said Ron. “It’s not just business that makes this place special — it’s the people.” 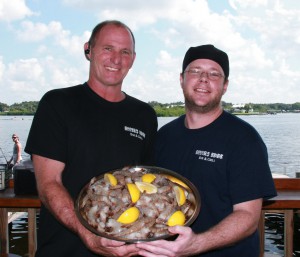 Nestled on a piece of land overlooking the Alafia River, Rivers Edge is a popular destination for bikers and boaters alike. “Visit us by boat, bike, or auto,” reads their advertisement, inviting customers to stop in for a cold beer, a bite to eat, and to listen to live bands that entertain every weekend.  You can also fish from the dock, watch dolphins play, and see Jet Skiers zooming by on hot summer afternoons. “Everybody is welcome here, and everybody gets along great,” said Randy.

Since purchasing Rivers Edge three years ago, the brothers have wasted no time improving the existing venue, adding a new and expanded poolroom, extended back deck, new roof, more seating and parking areas, and misting fans to keep patrons cool on steamy afternoons.

They also expanded their menu, bringing in chef Sebastian Comfort, who formerly worked as a sous-chef for the Lowry Park Zoo.  “We serve 75-100 pounds of peel and eat shrimp per week,” said Randy, displaying a large bowl full of their signature item.  “And you can have it any way you want it — blackened, boiled, broiled, fried, spicy — we’ll make it to suit your taste.”

Another menu favorite is the “Edge Burger,” which the brothers cook and serve to the tune of 300 per week. Rounding out their menu are wings, chicken fingers, onion rings, cheese sticks, nachos, oysters on the half shell, deviled crab, fried clams, and sandwiches, including  grouper, flounder,  grilled chicken, and bacon, lettuce and tomato. 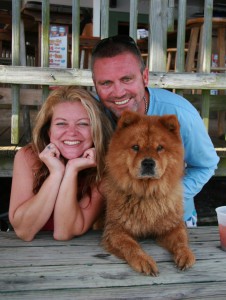 “Everything on their menu here is great,” said one hungry biker, who had just arrived from Sarasota on a poker run with his friends. “And there’s always something going on every day — live music, DJs, karaoke, and a lot of charity events and benefits.”

“We like to give back to the community,” said Robert, who, along with his brothers, own multiple properties in the area.  “We’re all landlords in the neighborhood, and we believe in treating our neighbors right.” The Cremeans credit their father for giving them a business sense early in life, “but it was my mother who taught us to be kind to people and to do things to help the community.”

According to the brothers, that kindness and generosity returned to them a hundredfold last year, as they faced the tragedy of losing both their mother and sister within months of one another.  “People around here pulled together and gave us their love and support,” said Randy.  “It’s something we’ll never forget.”

Family ties are also clearly evident in the operational structure at Rivers Edge, as sons, wives, nephews and nieces work side by side to keep things running smoothly.  Randy’s wife Dawn runs the kitchen, while Robert’s wife Lisa manages the bar, vendors and special events.  Nephew Ian Drake, a medical lab student at the University of South Florida, expedites food orders from the busy kitchen area.

“People like coming here because they know they’ll be treated like family,” said Randy.  “Without our customers, we’d be nothing.”

For more information about Rivers Edge entertainment and events, look for them on Facebook, or visit their website at riversedgebar.com.

Go ahead, hug that tree. It’s good for you