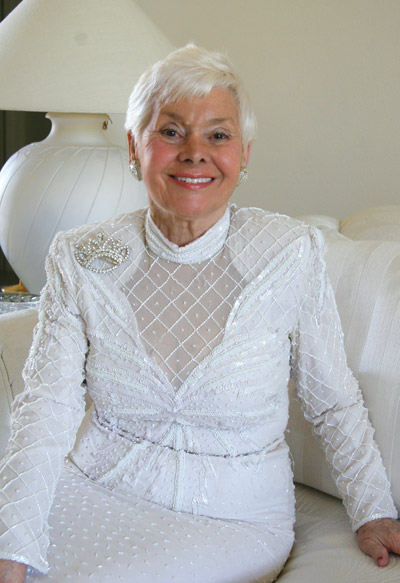 Louise Ferla relaxes in a beaded gown at her home in Valencia Lakes. Lisa Stark photos.

From singing Christmas carols for military servicemen to baking cookies to send overseas to the troops, Valencia Lakes resident Louise Ferla has always kept one thing closest to her heart: giving back to Americans who have served our country.

Ferla’s voice slightly quavers with emotion when she describes some of the experiences she’s had with active-duty and retired veterans alike during her 40-plus years of volunteering.

“I feel so grateful when I can put a smile on the face of an Army or Marine veteran,” she said.  “With all they’ve done for us, the least I can do is give them a little entertainment to brighten their day.”

Growing up in a Massachusetts family that valued music education, Ferla studied violin and piano at a young age, but it was singing that really captured her interest.  She began her career as a professional vocalist in her early 20s, performing with a blind trio in restaurants and nightclubs during an era when “opportunities were not as plentiful for those who had a disability of any kind.”

During those years, Ferla learned a great deal about the entertainment industry, as well as societal attitudes and prejudices of the time.  As time went on, Ferla evolved into a seasoned entertainer, singing in casinos, nightclubs and lavish private parties.  She developed her vocal identity, along with her trademark style in costuming.

“My hats became my signature, and they remain so today.” she said.  “I love the fancy, flamboyant hats I’ve collected over the years, and when I get tired of one of them, I just give it away.”

It was her innate fondness for glamour and elegance that led Louise into her next passion: the world of American beauty pageants.

“I believe there are two kinds of beauty: inner and outer beauty,” she said.  “That’s what Ms. Senior America is all about.”   She currently serves as vice president for the national Ms. Senior America Pageant, after more than a decade of involvement with the organization.  Its mission statement is simple: “We honor those women who have reached the Age of Elegance, based on the belief that seniors are the foundation on which American youth will build a better tomorrow.”

Ferla was chosen Ms. New Jersey Senior America in 1993. Though her reign as a beauty queen is now over, she still upholds the ideals that Ms. Senior America exemplifies: “The dignity, maturity, and inner beauty of our most valuable treasure — our seniors,”  she said. When people ask about her age, Ferla laughs and says:  “I tell people I’m not aging, just marinating.”

When Ferla became active in the Ms. Senior America Pageant more than ten years ago, she would take contestants along with her on her travels, visiting veterans’ hospitals and nursing homes, entertaining the men and women who had served their country.  She often covered her expenses using her own money or organizing benefits to raise funds.

Her eyes became misty when she recalled a letter she received from an Army sergeant in Afghanistan, asking if she might have an old guitar she could donate to his troops.

“Instead, I rallied my friends, and we raised enough money to buy and ship them some brand-new instruments,” Ferla said. “ They were so thrilled and thankful.”

Ferla says the Ms. Senior America Pageant has given her a platform to communicate to veterans and young enlisted servicemen that “we do care about them and want them to succeed.” 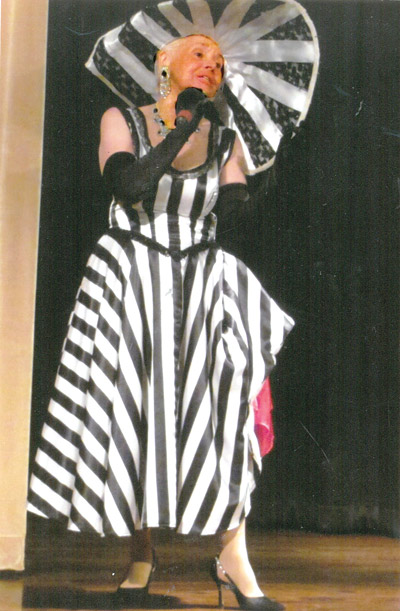 Through the pageant, she said, she has made lifelong friendships with women from all over the United States.  Her face clouded slightly when asked about how some people view beauty pageants as shallow or self-serving.

“I know I shouldn’t be sensitive to what others say, but it does hurt sometimes,” Ferla said. “I just have to remind myself to stay true to who I am and to keep trying to make a difference in people’s lives. That’s what I tell the young people I meet, and that’s what I tell myself. ”

Today, a refined sense of style and grace is clearly visible in Ferla’s Valencia Lakes home.  “I’ve always enjoyed classic furniture and beautiful artworks, things that bring a smile to my face” she said, gesturing toward her collection of porcelain dolls and a framed modern art painting signed by David Letterman on her dining room wall.  She spoke fondly of the interesting places and people she has encountered along her journey. The recipient of a number of awards recognizing her achievements, her favorite honor was being asked to perform at the White House in a 2000 Christmas Holiday Showcase.

“The senior woman of today isn’t the docile little old lady you see at the county fair, holding a jar of pickles,” said Ferla.  “Today you’ll find her out in the community, volunteering at the local hospital, nursing home, elementary school, or women’s shelter — letting her voice be heard.”

This year, the 2015 Ms. Senior America Pageant will be held at the Resorts Casino Hotel in Atlantic City, N.J.  For more information, visit www.senioramerica.org or call 732-746-2598.

Commentary: Virtually gathering with the neighbors

Ana Banana hosts a day for kids, fishing and cupcakes