Commentary: Virtually gathering with the neighbors 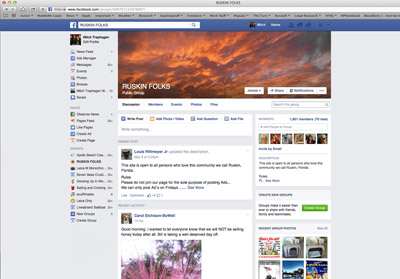 South Hillsborough’s real communities are beginning to spring up online as virtual communities. There are community bulletin boards, classified ads for Apollo Beach and even a board for buying and selling baby clothes and supplies in Riverview, all on Facebook.

Among the largest and most active is one called “Ruskin Folks,” with more than 1,700 members, including many newcomers to the area.

In the large northeastern metropolitan area that I, until recently, lived in, meeting the neighbors was never a problem. Almost everyone walked to places, from the grocery store to the hardware store. Everything most people could need was within a few blocks’ stroll, and that made it easy to run into people you knew, or would soon get to know.

It was also somewhat the same in the small town in which I grew up. Yes, we might drive to the department store or grocery, but it was a virtual certainty that you’d encounter someone you knew at one of those places. It has been 34 years since I’ve lived in that town, and I still run into people I know in the various stores on my infrequent trips “back home.”

But Ruskin (or Apollo Beach, Riverview, Gibsonton and so on) isn’t like that. They are neither big cities nor small towns. There are no central places in which people gather, no real public space, no real centers. With the exception of Ruskin, perhaps, which began as an isolated town in its own right, most of South Hillsborough began as planned exurbs, and Tampa, the central city, has grown to turn them into suburbs. 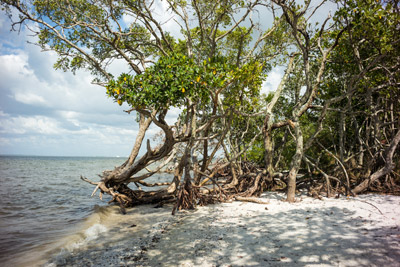 Although South Hillsborough is indeed blessed with public spaces, such as E.G. Simmons Park, the crown jewel of the Tampa Bay coastline, there aren’t many gathering places to meet the neighbors. In response, virtual communities are springing up online. Mitch Traphagen photo.

So … you’ve just moved to Ruskin. Congratulations and welcome! But now what? How do you meet people? How do you get to know the ins and outs of the place, the best restaurants and local haunts? This time of year, your neighbors could be packing up for a seasonal expedition to a northern home. Or they might work nights at Amazon or work days in Tampa or even Clearwater, spending significant time in traffic. They aren’t ignoring you, they are just tired and want to get home.

Although all of the communities in South Hillsborough are unincorporated, meaning none has a mayor nor municipal government, perhaps we could join together to ask the Powers-That-Be in Hillsborough County to take up the case and help to create community spaces in our communities. Or, better yet, let’s ask the State of Florida to help!

Oh wait. We kind of did that already. If you’ve just arrived you may not know that we spent years on creating “community plans.” I think you’d be pretty hard pressed to find anyone who even knows what those plans are anymore. And the state? Well, they sometimes like to pretend that people’s thoughts or votes don’t really matter on certain issues like high-speed rail and last year’s Amendment 1, passed with 75 percent of the vote and ignored by virtually everyone in Tallahassee. And despite the growth, there are wild places right here in South Hillsborough that should not be ignored, that should be saved.

But then again, sometimes it’s best to be ignored or overlooked by government, whether county or state.

With that said, I have to admit, such a blanket statement is really unfair — county commissioners such as Sandra Murman have never taken South Hillsborough for granted — in fact, she has frequently worked overtime for the needs of people in this area. She and other elected officials truly do care and do work hard on our behalf.

And, of course, South County is indeed blessed with public spaces, such as E.G. Simmons Park, in my opinion the crown jewel on Tampa Bay’s coastline. But that’s more a place to seek out beauty, solitude and tranquillity; it’s not a Central Park or Times Square-like gathering place.

And perhaps that is for the best, at least for the next few months. It’s going to be 95 degrees today with a bazillion percent humidity. What better place to meet your neighbors than from your computer, basking in the air-conditioned comfort of your home?

I’ll see you online. Or, perhaps, after driving to the grocery store.