Home News Through caring hearts: The printing of a helping hand
News

Through caring hearts: The printing of a helping hand

In Valencia Lakes, a fledgling organization is using a 3D printer to help children in need of prosthetics. 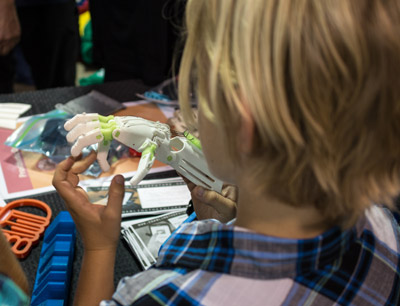 A child looks at a 3D printed prosthetic hand during MakerCon, a convention of inventors and innovators held in Tampa on April 18. The hand was among several on display at the booth of e-NABLE and the local organization Handling the Future. Mitch Traphagen photos.

“About one in 2,500 children are born with missing fingers,” Laird Popkin said. “That may not seem like a lot, but when you look at a city of a few million people, it is a lot.”

In the Tampa Bay Metropolitan Area, with a population of roughly three million, that translates to at least 1,200 children each year.

And then each year, hundreds more lose fingers and even hands to the most basic things in life, such as an accident while mowing the lawn, or helping out on a family farm, or simply doing the things that kids do.

And all of those numbers could well be low.

For anyone, but especially children, missing or losing fingers or a hand is a traumatic situation that goes far beyond description. Only the sufferer knows the true pain of such a loss. Riding a bicycle, holding a baseball bat and successfully hitting a baseball … such things become little more than dreams. 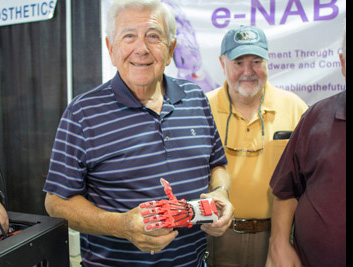 Dr. Richard Brown, who founded Handling the Future after reading an article about 3D printed prosthetics in the New York Times, with one of the results from a 3D printer during MakerCon in Tampa. Depending on the situation for the child, the fingers can move and grasp cups, help to tie shoelaces or even grasp a baseball bat.

And other children can sometimes be thoughtless. They can be cruel, without knowing the often-lasting impact of what they do or say. In childhood and adolescence, differences often stand out in the most painful ways possible.

Prosthetic devices have a long history, and through time they have advanced significantly. But as advancements climb, so too do the costs. Modern prosthetic devices can cost many thousands of dollars. And when it comes to growing children, they often aren’t available to match their growth. Many private insurance companies place limits on annual or even lifetime expenditures for prosthetics, if they allow children to be covered for them at all.

That practice puts a four- or an eight-year-old in a difficult situation. Prosthetic fingers or a hand built and fitted for a four-year-old won’t suffice for a 16-year-old, or a 20-year-old. It likely would not even suffice upon their next birthday.

Growing children in need of a prosthetic could easily require two or more refitted devices each year. For most parents, that simply is not affordable. 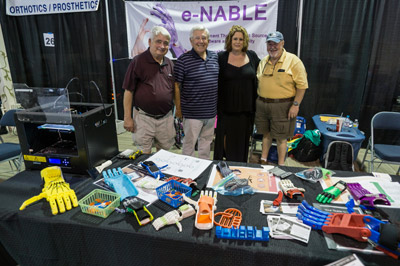 Members of Handling the Future at MakerCon are Bob Corin, Dr. Richard Brown, Melina Brown and Alan Wax. Their booth was next to that of the St. Petersburg School of Prosthetics, whose members were impressed with and encouraged by the innovation to help people, particularly children, in need of prosthetics.

Enter Laird Popkin, a group known as e-NABLE, and now a dedicated group of professionals living in Valencia Lakes stepping up to help locally.

Popkin is the chief technology officer for an automotive research group in the Miami area. He is also the Florida face for e-NABLE, which describes itself as “a global network of passionate volunteers using 3D printing to give the world a ‘helping hand.’”

And in Valencia Lakes, a community on U.S. 301 near Sun City Center, there is Dr. Richard Brown.

Brown’s wife recently handed him an article from the Feb. 17 edition of the New York Times. The article described how people were joining together to create prosthetic devices using increasingly common 3D printers. The costs involved for materials are negligible, and the detailed instructions for printing the prosthetics are freely given away by groups like e-NABLE. The 3D printers, while slowly coming down in price, are a more significant investment.

“My wife showed me the article and I thought, ‘This is something that I can do,’” Brown said. 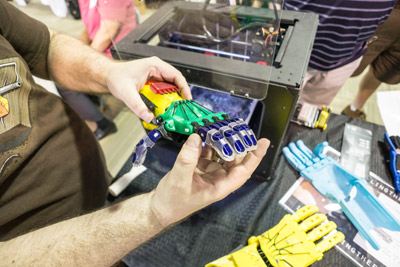 Laird Popkin of e-NABLE in front of a 3D printer, holding a printed prosthetic hand. According to Popkin, one in 2,500 children is born missing fingers. In the Tampa Bay area, that translates to at least 1,200 children annually.

He formed a group named Handling the Future, and called upon his neighbors to help. His organization is currently made up of 14 professionals and counting, from teachers to entrepreneurs and an attorney, a physical therapist and Brown, who is a chiropractor by training. Within the group, they have, and in growing fashion, the expertise and ability to create prosthetics and even provide proper fitting.

“There are parents who may not be able to afford prosthetics for growing children,” Brown said. “I am a mechanical person, I’ve worked with my hands all of my life. When I saw the article, I said that is easy for us to do. All we need is a 3D printer. We found out there is a need for it.”

Certainly there is a need for it around the world, but also in the South Hillsborough area. And now Dr. Brown is ready to begin reaching out to find the children in need. They don’t have to suffer in silence. There is help available, and now that help is local.

At the moment, they are making use of four hours each month, per person, on a 3D printer at the main Tampa Library.

“The library is committed to assisting Handling the Future in their efforts anyway we can,” said Megan Danak, principal librarian at the John F. Germany Public Library. “The cause is very worthy, the volunteers are fantastic people, and we are proud to be a part of their tremendous efforts.” 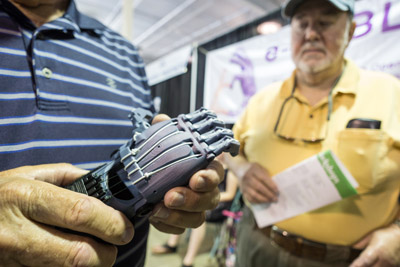 Handling the Future hopes to raise money to buy their own 3D printer. In the meantime, they are not simply waiting around; they are already making prosthetics and providing them to e-NABLE.

But they want to make certain the South Hillsborough community knows that they can help children in need right here, right now.

“If someone in the area has a child or a grandchild that needs this, we can help. Right now, we can help,” Brown said. “As the child grows, they can return to be refitted.”

The cost of a 3D printed prosthetic ranges from $20 to $100, depending on the needs, with an average of $50. Much of that cost goes into the padding for the skin and attachment pieces, rather than in the 3D printed device itself.

And depending on that need, suddenly, fingers can move where there were no fingers before. Suddenly, shoelaces can be easily tied with two hands, when that was not possible before. Suddenly, a baseball bat can swing, with the crack of a ball as the result. Suddenly, riding a bicycle becomes much less dangerous.

For the child and his or her parents, there is no cost at all. The devices are created, fitted and given free of charge.

Four hours on a 3D printer at a Tampa library is barely enough time to create a single prosthetic. The Valencia Lakes group hopes to raise money to buy a 3D printer to significantly advance their work, their hopes.

Even if the needs of the South Hillsborough area and all of Tampa Bay are met, the global needs are tremendous. Around the world, in the troubled places where war and poverty create problems of their own, a prosthetic can’t even be a dream for a child, let alone for impoverished parents. e-NABLE and Dr. Brown’s group want to change that.

As he said, “This is something that we can do.”

And that is more than talk. They are doing it. They are planning for a future in which they will invest and increase their ability to help. They are making hands and fingers for children who did not have them before. They are making dreams come true with every crack of a baseball bat, with every shoelace tied, every bottle of water that could be held in a hand or with fingers that once did not exist. It is incalculable progress with every kid that once may have been mocked but now is being told, “Whoa, that looks pretty cool!” thanks to the variety of colors and abilities of the prosthetic hands.

The ability to make the prosthetics is so basic that even schoolchildren are learning how they can help other kids, along with learning principles of engineering, in making their own prosthetic hands with 3D printers. Fitting, of course, requires professional assistance.

Fifty dollars. That and dedication can literally change the world, just as it can change a family, a neighborhood, a community. Fifty dollars. Plus the helping hearts of those who are dedicating themselves to it.

Fifty dollars, dedication, and action over mere words and with a warm and caring heart: Suddenly, the world is changed for the better. From Valencia Lakes, that change is happening right now.

If you can help Dr. Brown’s organization, Handling the Future, in their quest to purchase a 3D printer, please email him at handlingthefuture@gmail.com. The price of a 3D printer ranges from less than $1,000 to several thousand dollars. A larger version is required because room is needed to build a prosthetic hand. In addition, there are also ongoing costs for the materials required to make the prosthetics. But considering the benefit, the cost is small.

Handling the Future is a community-based effort, and due to the all-volunteer nature, the cost is a low hurdle to make such a marked impact on children in need. With some assistance from the community, Dr. Brown and Handling the Future could ensure that every potential South Hillsborough child in need is provided with a prosthetic, and a brighter future.

For information about e-NABLE, visit www.enablingthefuture.org.

In Apollo Beach: A home for a hero