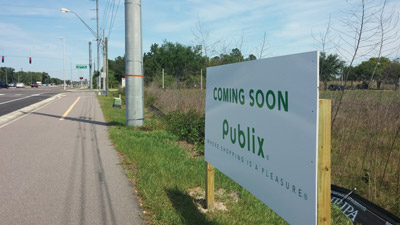 Publix will be the anchor store at the new Rivercrest Commons shopping center at U.S. 301 and Symmes Road in Riverview. Kevin Brady photo.

A Publix supermarket boasting a drive-through pharmacy and a liquor store will be the centerpiece of the new Rivercrest Crossing shopping center at U.S. 301 and Symmes Road.

The supermarket and other stores in the 15.31-acre strip mall are due to open in fall 2016, with construction set to begin this September. News about the development had been under wraps for months.

Other tenants in the parcel at one of Riverview’s busiest intersections are expected to include the Casablanca Nail Salon, a sit-down restaurant and a gas station/convenience store, according to the development company.

In addition to Publix, the shopping center offers a 12,000-square-foot strip for other potential tenants. “We have a few we have signed leases with, and a few with whom we are negotiating, so things are going pretty well,” said Jim Dunphy of Dunphy Properties, the Tampa commercial real estate company overseeing the project. The company is in the process of negotiating a lease with a gas-convenience store for one corner of the property.

“I think it is going to be good for the area,” said Gary Barres, a Riverview resident who lives two blocks from the proposed shopping center. “Publix is a first-class store and I look forward to doing business there.” 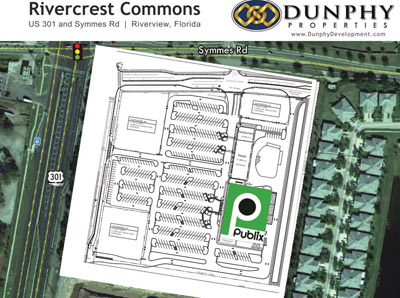 An artist’s conception of the new Rivercrest Commons shopping center.

“It should help increase property values, and that is always a good thing. I also think their reputation will help draw quality tenants as well. It is a win-win situation,” added Barres, who has lived in southeast Hillsborough since 1978.

In a document aimed at potential tenants, Dunphy Development cited a potential customer base of 55,570 living within three miles of Rivercrest, with 121,629 living within five miles. Average household income within a five-mile radius is $71,510, according to the document, which also cited “excellent frontage and visibility along both U.S. 301 and Symmes Road.”

“We are in the design and permitting process now,” Dunphy said. “The property is already zoned, so all we have to do is get our building permits, and we are in the process of getting that done right now.

“Our target is to have everything turned over to Publix by early fall, 2016. Our architect is designing the buildings, so the biggest hurdle right now is just lining up all the building permits so we can close on the land and begin construction in September.” said Dunphy.

Affordable land that has spawned a boom in residential building, proximity to interstate highways and good schools — all have played a part in priming the area for development, Dunphy said.

“The roads are in great shape, it’s close to Tampa and Brandon, there are already a lot of young families living out there,” said Dunphy, “so there are great amenities. I really don’t see any downside to South Hillsborough County.”

Coming out of a recession that paralyzed the Florida real estate market, South County is now a very attractive proposition for developers, Dunphy said. “We developer types, we are all hungry to get going because we have been sitting on our hands for four or five years.”

Local singer-songwriter to perform at Firehouse May 9th