Home News In Apollo Beach: A home for a hero
News

In Apollo Beach: A home for a hero 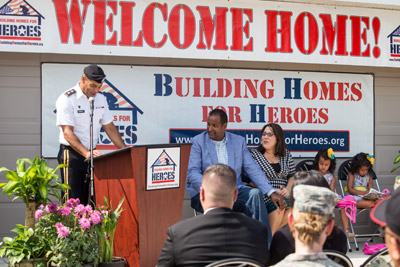 Major General Michael Garrett, Chief of Staff at U.S. Central Command at MacDill AFB, welcomed Sgt. Jorge Sepulveda home, and to his new home in Apollo Beach, provided to him as a disabled veteran through Homes for Heroes. Mitch Traphagen photos.

The MacDill AFB Color Guard led the procession down the peaceful neighborhood street in the small Apollo Beach community. Officers from the Hillsborough County Sheriff’s Office followed, along with bagpipers, the Patriot Guard motorcycle riders, trucks from Hillsborough County Fire Rescue and several neighborhood children running alongside. The neighbors stood at attention and cheered when Sgt. Jorge Sepulveda emerged from a family minivan, midway in the procession.

Major General Michael Garrett, the chief of staff at Central Command at MacDill AFB, saluted the sergeant and then warmly embraced him, telling the crowd of volunteers and neighbors that Sgt. Sepulveda made him proud to be an American. He then looked out at the people gathered, some in uniform, others civilian volunteers, and many new neighbors, and said they all made him proud to be an American.

For Sgt. Sepulveda, his wife and three young daughters, it was a welcome-home ceremony. The sergeant, a fully disabled veteran who served his nation for nine years, had come home through Homes for Heroes, a national organization dedicated to providing homes to America’s heroes — from veterans to police officers to first responders, primarily those who have suffered disabilities as a result of their service to America and Americans. 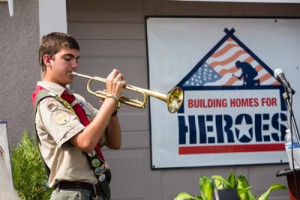 William Siverten, a bugler with Boy Scout Troop 061 in Valrico, plays America the Beautiful during the ceremony.

Some may say the word “hero” is overused. But anyone who puts their life on the line for this nation, and for the safety and protection of Americans and is willing to take the last full measure of devotion, is indeed a hero.

In Apollo Beach on Saturday, one hero, Sgt. Jorge Sepulveda, along with his young family, was welcomed home.

“We are giving Sgt. Sepulveda and his family this home today, mortgage free,” said Kim Valdyke, the Florida representative for Homes for Heroes. “We take applications online, and there is a vetting process involved. You have to be at least 80 percent disabled according to the VA (Veterans Affairs). You don’t have to look like it, of course.”

In this case, Chase Bank provided a newer home that had gone through foreclosure to Homes for Heroes. The organization then went in and made any repairs and accommodations needed for the disabled veteran, and then simply gave it to him. And with that, an American hero, a man willing to put his life on the line for the nation, has a new home in which to recover and to join with his wife to raise their young daughters in peace — a peace that he fought to preserve. 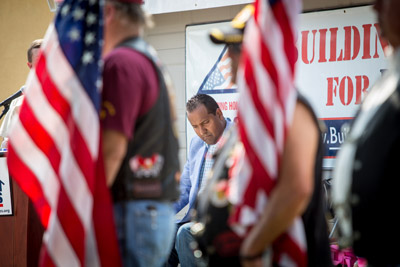 Seen through the colors held by the Patriot Guard riders, many of whom are also veterans, Sgt. Sepulveda appeared overcome with emotion.

Sgt. Sepulveda served in the U.S. Army 1st Special Forces Group and with the 10th Special Forces Group, both airborne. In his nine years of service, including in Operation Enduring Freedom in Afghanistan, he suffered physical and emotional injuries alike.

Several other companies and organizations, including the Florida Department of Economic Opportunity, Advance Auto Parts, and The Home Depot Foundation, also played a role in providing and preparing the home for the sergeant and his family.

During the ceremony, Sgt. Sepulveda occasionally appeared at a loss for words. But he stepped up to the podium after being introduced by Maj. Gen. Garrett and spoke his many thanks in a strong voice. Although perhaps the sergeant was overcome with emotion, to his new neighbors, it was an honor to call him just that: a neighbor. 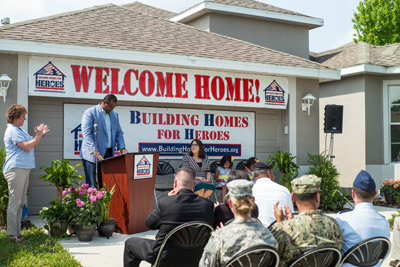 Kim Valdyke, left, the Florida representative for Homes for Heroes, along with the gathered audience, applauds as Sgt. Sepulveda speaks words of gratitude.

In all, it was a group of dedicated individuals and organizations working to help repay a debt that can never be fully paid, but also a debt that the sergeant does not consider owed. Along with his wife and three young daughters, he just appeared happy to be home. Home in Apollo Beach.

Homes for Heroes is a national organization. For information, visit www.homesforheroes.com. 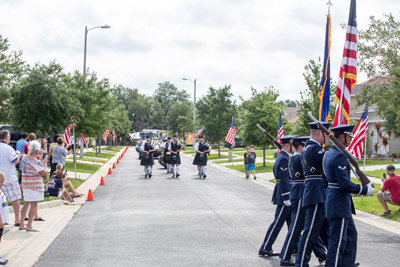 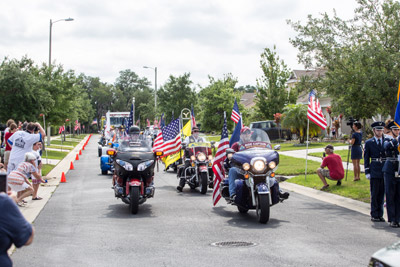 Through caring hearts: The printing of a helping hand