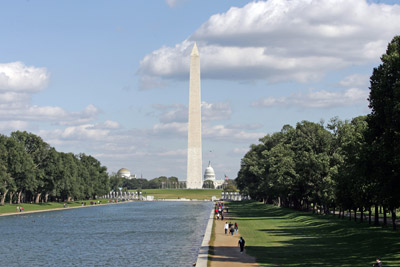 The low-speed, low-altitude flight of Ruskin mail carrier Doug Hughes, 61, took him over the National Mall, the Reflecting Pool, past the Washington Monument before finally landing on the west lawn of the Capitol Building. It is an area often filled with tourists and office workers. He was met by armed officers of the Capitol Police and immediately taken into custody. He has since been allowed to return home to Ruskin until a May 8 court hearing. Hughes faces several charges for violating the restricted airspace. Mitch Traphagen photo.

On “tax day,” April 15, when the news broke, first from the Tampa Bay Times and then from every major news outlet in the nation, that a “Ruskin mailman” had piloted a small helicopter through some of the most heavily restricted and heavily guarded airspace in the world to land on the west lawn of the U.S. Capitol Building, the primary response in South Hillsborough seemed to be: “Wait … our Ruskin?”

Doug Hughes, a 61-year-old mail carrier, took off in a gyrocopter from Gettysburg, Pa., traveling at a slow speed and low altitude over the National Mall and Reflecting Pool, past the Washington Monument, and successfully landed on the Capitol lawn. There were no surface-to-air missiles fired, but there were plenty of Capitol Police officers holding him at gunpoint after a reported rough landing. He was immediately taken into custody.

According to reports from the Tampa Bay Times and other news outlets, Hughes was hoping to deliver 535 letters to members of Congress advocating campaign finance reform, an effort that he felt warranted the risks of his dangerous and illicit flight to raise awareness of the issue. The letters were reportedly never delivered.

He has stated to the Tampa Bay Times that his wife and children were completely unaware of his plans and his action.

According to reports, Hughes had notified authorities of his plans through an email to barackobama.com. It is the Capitol Police, however, that has jurisdiction over Capitol Hill. They were reportedly made aware while the flight was already underway, arriving in time for his landing. The FAA has jurisdiction of the airspace involved. They were not notified.

After more than a day in custody, Hughes was released to return home to Ruskin, although he is effectively under house arrest with a GPS monitoring device reportedly attached to an ankle. He is to return to Washington on May 8 for a court hearing. He has been ordered to not attempt to fly an aircraft. He faces several charges.

Security analysts are reportedly examining how he could have accomplished the flight, given the security apparatus covering the Washington, D.C. area and specifically Capitol Hill.

Some media watchdogs took exception to the coverage of the event and of the act itself, describing it as so potentially dangerous and deadly and questioning the role of the media involved.

Hughes told the Associated Press that he was frustrated that his exploit has seemed to overshadow his message.

The Observer News has decided to not publish information about his residence or his family.