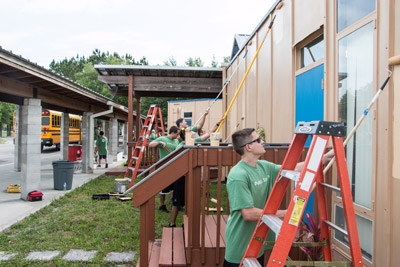 Ninety volunteers from Publix went to the RCMA campus in Wimauma to paint, clean, landscape and more. According to the school principal, with money tight and directed to their students, the Publix volunteers accomplished more in four hours than the facility could have accomplished in months. Mitch Traphagen photos.

Things began slowly. It is difficult organizing 90 people for a large multifaceted project in the best of circumstances. At first, everyone was gathered for a photo and then they heard words of thanks from administrators. And then … with shovels, rakes, wheelbarrows and paintbrushes and rollers at the ready, groups formed, and slowly the work started.

But then slowly turned to rapidly. Imagine 90 people showing up to paint your house. Once they get started working, it would be a job very quickly completed.

And that’s how it was when 90 volunteers from Publix showed up at the RCMA campus off U.S. 301 in Wimauma last week. They painted, they pulled weeds, they raked, they trimmed trees and bushes, they landscaped with potted plants, they even pressure-washed outbuildings.

In all, it was an enormous task, but once the roles were clear, once the beginning of an impact was visible, they took off, working hard, moving quickly.

Four hours were slated for the massive project, but it is unlikely it took them that long. The volunteers put their muscles and backs into the job, along, apparently, with their hearts. They pushed. They wanted to make a difference, and they did. 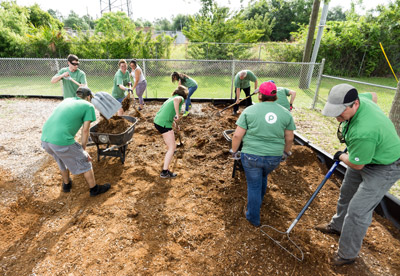 “There sure are a lot of them,” one staff member said to another as they walked around campus. In a preschool room, little faces smashed up against the windows to look out at all of the people wearing green “Publix Serves” T-shirts digging in the dirt and putting in plants.

To an adult, that would be called work, particularly under the growing heat of the day. To a toddler, it must have looked like great fun.

“We focus so much attention on these children that, sometimes, our facilities are neglected,” said Mark Haggett, principal of the two schools on the Wimauma campus. “Publix is going to accomplish more work in four hours than we could have managed over many months.”

According to Publix, community service is a major facet of the corporate culture. In one story, company founder George W. Jenkins was asked how much he thought he would be worth had he not given so much away. His immediate reply was, “Probably nothing.”

At RCMA, consistent with Jenkins’ quote, 90 volunteers gave much and were most certainly worth a great deal to the organization.

Publix, with nearly 1,100 stores in states throughout the Southeast, is headquartered in nearby Lakeland. The company employs an estimated 168,000 people, with the largest majority in Florida.

Although not without occasional controversy, Publix has long been considered one of the best companies in the United States to work for, according to Fortune Magazine, and is recognized for a litany of other notable achievements and philanthropic work.

“We are thankful for our relationship with the RCMA, and so many other great charitable organizations,” said Brian West, Publix community relations manager. “Giving back to our communities is the right thing to do, and, once again, our associates delivered.”

On the same day, Friday, April 17, Publix undertook similar projects in the six states it serves, in part to celebrate its 85th year in business. Each 10-store district sent dozens of employees to help a nearby community organization.

There are three facilities at the RCMA campus in Wimauma, all of which received attention from the Publix volunteers. The Beth-El Child Development Center, funded by Head Start, is a childcare center for 65 children of migrant or seasonal farmworkers; the RCMA Wimauma Academy is a charter elementary school serving 220 children; and the RCMA Leadership Academy is a charter middle school serving 53 children.

RCMA, or the Redlands Christian Migrant Association, began in Florida in 1965 under what the group describes as a “litany of horrors.”

According to RCMA, nearly a half century ago, most farmworkers had no choice but to take their children into the fields with them, spending long days in the heat and sun and being exposed to pesticides, insects and snakes. One toddler drowned in an irrigation pit, and others had been killed or injured by farm machinery.

As a result, a village of Mennonites near Homestead’s labor camp decided to help by opening two childcare centers for farmworkers. It was not an initial success. Eventually, the founders discovered that migrant parents felt most comfortable handing over their children to care workers from their own cultures.

Since that time, RCMA has grown to serve the needs of farmworkers and their children, serving more than 7,500 children. The organization has facilities near where large populations of seasonal workers live and operates with a $58 million budget.

But little of that money can be spared for luxuries, including paint and landscaping. And that is where the 90 volunteers from Publix stepped in. They brought with them the supplies and the labor and most likely went home with aching backs and warm hearts.

“A lot of us shop at Publix, so we knew that they would be cheerful and energetic,” Haggett said. “But we were struck by the sheer volume of activity. It also was meaningful to our children’s parents. Many of them have picked produce that was sold at Publix.”