Glitz and glamour of the canine kind 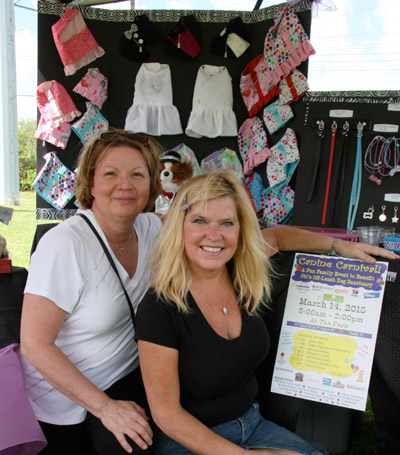 Alaine Gough has always loved to cook, and even ran a small catering business in her home state of Ohio. So when neighbors and friends began asking her to create some food concoctions for the canine members of their family, Alaine, a dog lover herself, was happy to help.

“I started making doggie cupcakes, birthday cakes, cookies and treats, all from natural ingredients I could buy at the grocery store, like bananas, peanut butter, and applesauce,” she said. “The dogs loved them.”

Soon Alaine was trying out gourmet recipes she found on the Internet, and, for the dogs, was adding decorative touches to give birthday and holiday cakes a festive look.

“I started thinking, wow, given the demand, I could make a business of this,” Gough said.

Since then, she has done just that, expanding her business to include not only dog treats but fashion apparel as well. She recently teamed up with seamstress Vicki Armontrout to pursue what she feels is a growing trend in the pet industry: dog clothing and accessories.

Gough, a licensed diamontologist with a long history in upper-level management for two large retail jewelry chains, had a special interest in jewelry design and accessories. Armontrout, a retail display designer and seamstress, wanted to lend her skills to clothing design.

Combining their experience and “passion for fashion,” they began forming a strategy to bring glitz and glamour to the dog world. 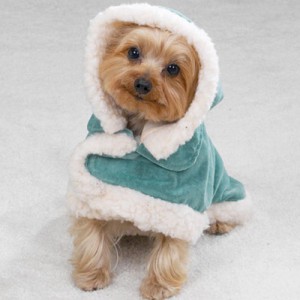 Naming the new venture Vanity Pooch, the pair soon assembled a line of customized bandanas, jeweled collars, frilly skirts, sporty shirts — and even a tuxedo and bride’s dress for the marriage-minded.

“Our dogs are extensions of our families,” said Gough. “And we love to spoil them like they’re our children, which really, they are.”

Statistics show she’s not alone in that sentiment. More than 80 million U.S. households now have at least one pet, according to a 2014 survey from the American Pet Products Association. Americans spend an astonishing $61 billion each year on their pets, laying out big bucks not just for food and medical expenses but also for dog toys, special-occasion gifts, gourmet treats, cute outfits, fancy collars and plush bedding.

Americans spend an average of $11,000 per pet during its lifetime, and dog owners alone shell out more on pet food than they spend on chicken, cereal, bread and candy. Dog lovers are also increasingly indulging in professional grooming, luxury day spas, and dog-friendly hotel stays for their pets.

While overall spending in the pet industry is at an all-time high, canine couture and high-end fashion for dogs is becoming a high-dollar industry as well. Fashion has “gone to the dogs” in a big way, publicized on television, in magazines and on fashion runways. 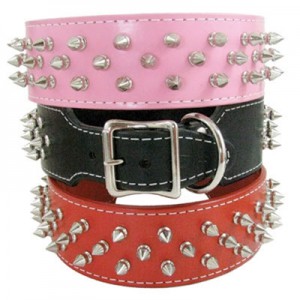 There is now a Pet Fashion Week, touted as the pet industry’s most sophisticated event, which takes place each August in the heart of New York City. Designers from France, Brazil, Venezuela and the United States attend to debut their ideas and launch new product lines.

Vanity Pooch appeared at the Canine Carnival held last month at Ott’s Off-Leash Dog Park in Ruskin, an event that Gough says was the perfect test market to try out her new fashion ideas.

“The most popular items were personalized sports apparel, jeweled collars, glittery bows and bandanas,” she said. “We completely sold out of our bling collars in just a few hours.”

There was also a lot of interest in jewelry items, even high-end jewelry pieces containing precious and semiprecious stones. One woman had seen in a magazine a dog collar set with amethysts and Swarovski crystals in 14-carat gold.

“She asked if I could design something like that for her, and I said I’d be happy to,” said Gough. “With my background in the fine jewelry business, it would be right up my alley.”

Though the rise in luxury pet spending may seem puzzling to some, it’s really not so surprising when you consider the immense emotional gratification people receive from their pets. 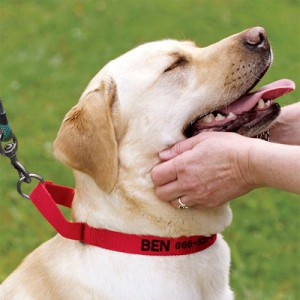 Given the joy that pets give to their owners, it’s no mystery why they want to reward and pamper them with goodies and treats.

Alaine Gough plans to take Vanity Pooch to several Florida events and festivals this summer. Dog lovers can find out more about her products and event details on Facebook or at www.vanity-pooch.com.