Sailing home from the sunrise 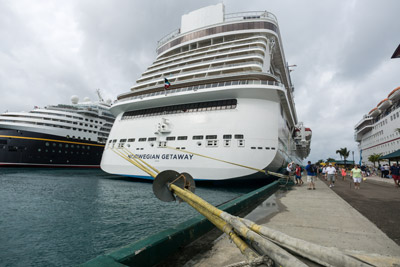 Photo gallery at the end of the article.

Far aft on the 16th deck of the Norwegian Getaway, in an open-air lounge named Spice H20 with a huge video screen and the Caribbean air washing over everyone, we could hear the voice calling out.

“Michelle! Over here! I have a table for you!”

We turned to see the smiling face of Gusti Nengah Wardhana, who worked at Spice H20, gesturing for us to come over.

In the Prime Meridian Lounge on the 8th Deck, somehow as if by magic, our leather sofa always seemed to be available. And every time we stopped by, Nathan Jaques was there, too. He would greet us by name with a huge smile and would ask if we’d like … whatever it was we last ordered. He always remembered.

The Norwegian Getaway has something for everyone. During the daylight hours, Spice H2O is adult only — nothing racy, just a refuge. A deck below is a SpongeBob-themed pool, complete with Patrick waving a welcome. There are activity centers for children, fully staffed, of course, one of which on our deck provided some amusement. Upon returning to our cabin one afternoon, in the lobby we encountered staff and a gaggle of children from the Splash Academy Youth Center, all wearing pointed ears, painted faces and meowing in tiny, high-pitched voices.

In one of two small areas of the ship reserved for smoking, Kathy, a beautiful soul from California, often held court on the 8th Deck area, just outside the Prime Meridian Lounge, next to an outdoor bar and not far from the main shopping area on the ship. It was a comfortable place for smokers and nonsmokers alike to gather, and Kathy somehow drew people to her. One evening, a group of flight attendants traveling together were sharing air passenger horror stories when Kathy, always there, always chatting and listening, suddenly became the focus. 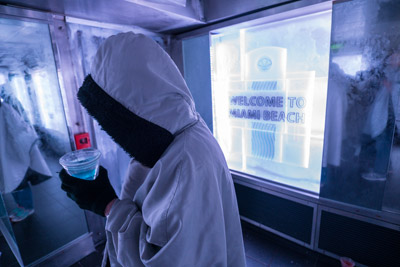 Perhaps the only way to experience South Beach at 20 degrees and in ice is in the SVEDKA/Inniskillin Ice Bar aboard the Norwegian Getaway.

Kathy has been everywhere. She is a widow, and after her husband tragically passed away, rather than giving up, she rose up. She flew to Belize for an open-ended stay. An older, single woman, she was told to strictly remain in the safe areas near her hotel. She instead ventured off, in search of the coolest local places to visit.

On one such mission, about eight blocks and a world away from her hotel, she encountered a street fight just before reaching the dive restaurant at which she was hoping to dine. At first intimated, thinking that was more than she could handle, her true spirit took over and she simply asked the men who were fighting if they could step aside so she could get to the restaurant. Silently, respectfully, they did just as she asked.

She has traveled ever since, and has been a passenger on most of the major cruise lines in the world. When asked, she said she considered Norwegian Cruise Lines her home. There are more luxurious ships, there are more traditional ships, but none were better. Here, there are no expectations, and the vacation begins the moment you step aboard. It is comfortable, relaxing, fun and affordable.

She has traveled in every possible way. On this trip, she chose to be economical. She found a deal for not much more than a few hundred dollars for the week and took off across the country for Miami.
A few hundred dollars. For a week. Including an endless supply and variety of incredible food. Including entertainment, all professional caliber, including sun and sea and seemingly limitless attention from the crew, and stops at three different islands in the Caribbean.

During that same week, a chain motel on a major highway in Florida City was charging a few hundred dollars for a single night.

Yes, she was a loyal customer, which helped; she felt she had reason to be. That ship, docked on the opposite side of the country from where she lived, did feel like home to her. Certainly it was far less expensive than home. 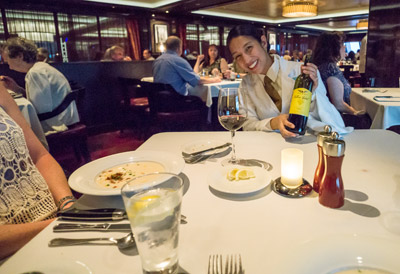 Jamie Ipapo in Cagney’s Steakhouse, one of the ship’s specialty restaurants. She had a smile and a manner that lit up the room.

In the darkened atmosphere of Cagney’s Steakhouse, with the Caribbean sun setting into a deep blue ocean, Jamie Ipapo’s smile lit up the room. There was just something special about her. In ordering our dinner, she made recommendations, all of which we took and all of which were excellent, and in doing so, she would often place her hand on a shoulder, or smile just right. She was not the product of a successful training program; she was a genuinely warm person. Such warmth comes only from the heart. She stopped to talk, to ask questions and answer questions we asked of her, about her life aboard and back home. We waddled out of the restaurant, but Jamie and her smile remained with us. We are better people for knowing her.
The sun baked the Dutch and Caribbean-inspired buildings on St. Maarten in the eastern Caribbean. The island, the smallest land mass that is shared between two nations, quickly filled with passengers from the cruise ships, but, before long, enough people had dispersed to the shops and bars and to the beach that walking just a little off the beaten path felt like we had entered a tourist-free zone. It is a beautiful place, almost magical, and the hours went by with a calm ease that is difficult to find in the USA. 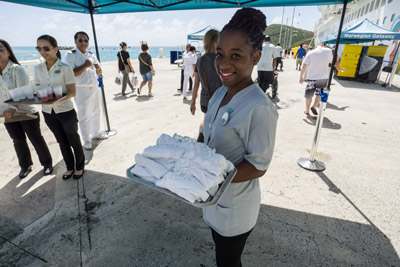 After a hot day in the Caribbean sun on St. Maarten, there could not have been a better way to be greeted back aboard the ship than with ice-cold, damp, mint-infused washcloths.

The walk back to the ship, however, proved we had tested our limits in venturing within and beyond the well-trod route of rum-toting tourists. By the time we arrived at the dock, we were sweaty and sodden messes … and then we were greeted by crew members offering cold drinks and one with a platter of ice-cold, damp, mint-infused washcloths. The latter, seemingly so simple, was indescribable in the pure pleasure and joy it held as we laughed like children and covered our faces and touched the ice-cold bliss to our necks. Score one big for thoughtfulness, Norwegian Cruise Lines. Pure bliss. Pure joy.

And back at sea with the Caribbean sun bearing down, the ship itself offered a refuge to the extreme from the heat, or even from the air-conditioned comfort of the cabins and companionways. The SVEDKA/Inniskillin Ice Bar is a dichotomy taken to an extreme. Outside the well insulated door of the bar were racks of parkas, and staff offered wool gloves to those going inside. Out on deck, it was a pleasant but warm 85 degrees. Inside the Ice Bar, it was a seriously cool 20 degrees. Walking in with one group, we all laughed at the extremes in so many respects. It was cold and it was amazing. Drinks were served in plastic cups that had ice liners — your lips drank from the ice. The motif of the Ice Bar — carved entirely out of ice — was that of South Beach, Miami Beach. It is the only place where Miami Beach could possibly ever see 20 degrees. Eventually, of course, the cold would reach through, and even the staff had limits on how much time they could spend inside. But for a moment, it was like a winter in a romantic movie and it was wonderful.

Fifteen years ago, Michelle and I sailed on our little boat out of Nassau Harbor pointed toward Florida and home, after six months of cruising. We were likely barefoot, in less-than-clean clothes and in need of a shower — certainly I was after the work of raising the anchor and chain and the nervousness of navigating the cut that drops quite abruptly from the shallow water of the harbor to the deep water leading to the ocean. 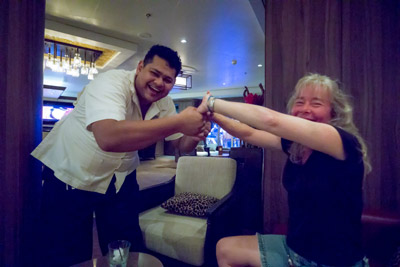 Michelle and Nathan Jacques in the Prime Meridian Lounge.

On this night, however, we clinked our wine glasses in toast after passing through the markers and the lighthouse of Nassau. We were in the Haven Restaurant, an exclusive enclave high up inside the ship. Michelle in a cocktail dress, I in a suit, our table for two next to a huge window that allowed a panoramic view that I could not possibly have allowed myself 15 years ago. We could never have imagined such a thing a decade and a half ago.

The Haven, while exclusive, is not necessarily the domain of the one percent; those with us in the dining room were just like us, although some perhaps not so overly dressed, and all enjoying their time away from the “real world.” It is a part of the ship’s first class, and we were there by invitation. It is a place where even the middle class can enjoy something truly special. The food, the wine, the ambiance and the view were spectacular.

From The Haven, we wandered back to the 8th Deck, where Nathan greeted us as friends and asked if we wanted … whatever it was that we had last ordered. Still dressed up and with drinks in hand, we walked through the glass doors, our shoes clomping on the wooden deck to where Kathy was, as usual, surrounded by people, listening and sharing stories. We lingered for a while, reveling in her stories, and said our goodbyes. In the morning we would dock in Miami, a seven-day cruise that simultaneously seemed like a wondrous lifetime and a mere blip in time. As we walked back toward the glass door, I glanced back at our new friend from California, and she caught our eyes. 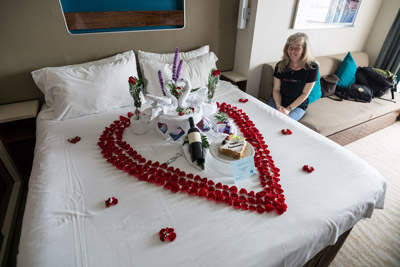 In booking, the NCL website asked if there was a special occasion: I wrote that we would be celebrating our wedding anniversary. This is what we found upon entering our cabin, thanks to Mickle Crisostomo, the housekeeping supervisor, and Manuel Frederick, our cabin steward.

“I’ll see you in Patagonia, huh?” she asked with a smile.

Yes, Kathy, I think you just might. Now I just have to find a ship to take us there.

Writer’s Note: The cruise in this series was purchased via the NCL website at their regular fare. None of the crewmembers we encountered knew they would be featured in an article. NCL did provide priority boarding so I could see the ship before it filled, and priority disembarkation (unloading 4,000 people from a ship, with all of the luggage involved, is a massive task, particularly when another 4,000 people will board with their luggage within mere hours). The priority disembarkation allowed me to make an appointment in Sun City Center, scheduled for less than six hours after docking. I’m grateful — not only was it a wonderful cruise, I made the appointment, a little sunburned but smiling and with camera in hand.

Click here for Part One of this feature series.