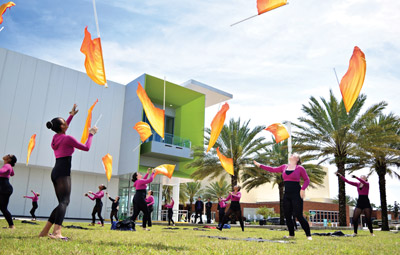 The Riverview color guard team warms up outside the Ocean Center before its performance. Michelle Bradshaw photos.

Few in the state high-school color guard circuit would have given the team from Riverview High a second look at the start of the season, never mind a chance at the Florida Federation of Colorguards Circuit (FFCC) Championships.

They won’t make that mistake again.

The Riverview girls’ Blue Radiance team capped the most successful season in school history with a second-place finish at the state championships in Daytona Beach, a three-day affair featuring more than 100 color guard and percussion teams from throughout Florida and Georgia.

Riverview placed second in its division with a score of 77.68, behind Lowndes High School Varsity of Georgia with a score of 78.12. The local girls scored the highest in the equipment caption with a 15.47, which measures their excellence and depth of complexity with flags, rifles and sabers.

“Because of our placement, we were invited to compete with the next-highest class, Class A in the Company Division on Sunday, but we were, unfortunately, unable to because Saturday night was also our prom, so the seniors left from Daytona immediately after we performed to head back to Riverview to get ready for their big night,” said Travis Miller, a manager in Riverview’s band program. “Taking second place to a more seasoned team was certainly not a disappointment,” Miller added.

Color guard is a movement-based program involving the use of equipment such as flags, rifles and sabers that provide the majority of the visual effects for the marching season, according to the team’s website. 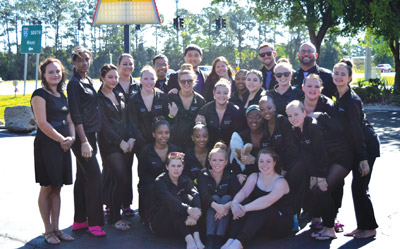 The Riverview team after the squad’s last rehearsal in Ormond Beach.

In only its second full season on the FFCC circuit, the 19-member squad had won every tournament it entered before Daytona. The team came in first at January’s FFCC Premier contest, winning a promotion to Class AA, and continued winning throughout the season. The color guard team is the most successful in the school’s 16-year history.

A new color guard director (Herman Rios), hard work, teamwork among staff as well as support from parents and band director John Davis have made the difference, according to team members and staff.

“It was a remarkable season,” Miller said.

Want to see the award-winning team in action? A recital is planned at Riverview at 7 p.m. Friday, May 15. The school is also hosting a marching band competition Saturday, Oct. 17.

For more information on the Riverview band program, visit www.riverviewhsband.org. 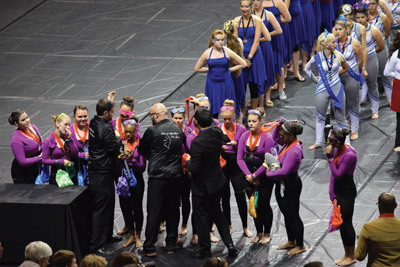 Staff members place silver medals on the girls during the awards ceremony.