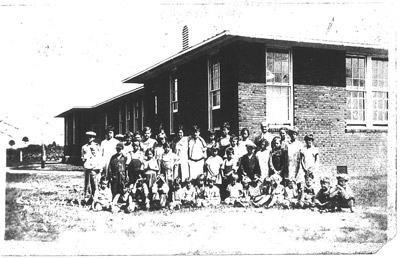 This single photo from 1926 acted as a guide for renovation of the Gardenville School’s restoration and is the only indicator of the age of the building. Photo courtesy of Pete and Jeanie Johnson.

Work is underway at the historic Gardenville schoolhouse that will turn the almost century-old building into a vibrant hub for senior citizens and others in the area.

The Gardenville School, at 6215 Symmes Road, was built sometime before 1926, but no one is quite sure when. It was a center of learning for the area until 1961, when it closed down — only to be reincarnated as a community center. The building has sat vacant since 2005, when its programs moved to the Gardenville Recreation Center, a stone’s throw away.

Construction on the $785,000 project began last October and is projected to be completed by July.

The 4,000-square-foot building will have a new foundation, a new floor and newly reinforced walls and new roof trusses.

“It will be completely new on the inside with a new electrical system, new plumbing, new air conditioning, fire sprinklers and the same kind of Wi-Fi and computer access as any of the newest parks’ facilities,” said Dan Myers, the project manager and the county’s senior architect for Real Estate and Facilities Services.

The refurbished building will also feature new restrooms for men and women and a major room in the center along with a small kitchen, office and room that will be used for a senior nutrition program.

“For the senior nutrition program, they are in desperate need, and that will be a good thing,” said Jeanie Johnson, a founding member of the Concerned Citizens of Gibsonton. 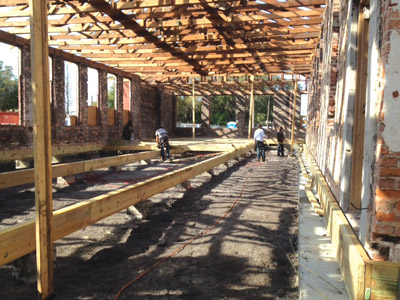 Construction crews gutted the interior of the Gardenville School building. The county is targeting a summer opening for the building. Photos courtesy of Hillsborough County.

Much of the credit for revamping the schoolhouse and building the recently opened $1.7 million neighborhood gymnasium goes to the Concerned Citizens group, whose members have been working for decades to bring new facilities to the area. Also instrumental was the Gardenville Rec Center’s Dave Ramirez.

The Concerned Citizens of Gibsonton got the ball rolling on the entire Gardenville Recreation Center complex when they applied for funding for the project. When the recreation center was opened in 2005, a gym was proposed for the property only to fall victim to the recession and Florida’s property implosion that saw county revenues fall drastically because of declining home values.

“Then about four years ago [County] Commissioner Sandy Murman came to us and said there might be funds available to build either a new gym or restore the schoolhouse,” said Carol Philips, secretary of the Concerned Citizens group and a Gibsonton resident since 1977.

“We talked it over and said we wanted both, but if only one could be done, we wanted the gym because that was the missing part of the [Concerned Citizens group’s] original plan for the area.” Another grant would later become available, meaning the schoolhouse could be renovated.

Rotting floors, no windows, water damage and a surprise guest greeted workers when they started the project last fall. A 30-inch savannah monitor lizard had taken up residence in the building’s crawlspace. 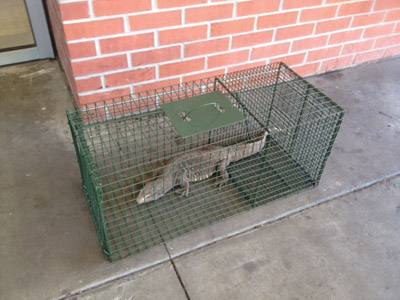 Apparently an escaped pet, this 30-inch savannah monitor lizard had taken up residence in the building’s crawlspace.

“It [the lizard] had done a great job,” project manager Myers said. “They had previously thought that there were snakes or rats in the crawlspace, but the lizard seemed to have taken care of all of that.”

The lizard was removed by a wildlife rescue service and later adopted by a collector.

While the building’s interior is completely modern, Myers and his crew tried to retain some of the building’s character on the exterior — no small task, given they had very little to work on.

Using a single photo of the schoolhouse from 1926 and using Plant City’s Turkey Creek School, built around the same time as Gardenville School, Myers tried to retain as much of the old building’s look as possible. “The exterior tries to remember the original appearance of the building,” Myers said.

Construction has been on schedule, although the age of the building has made the process more complicated than building from scratch. “Whenever you are dealing with an old building, there are hiccups, and so there have been many design decisions that needed to be worked out once we understood the condition of the building,” said Myers.

Windows should start appearing within the next few weeks.

“I am very impressed with how quickly it is going,” said Concerned Citizens’ Philips. “There will be lots of other activities that will be able to be held there, as well as meetings for other groups. It may also be able to be rented out for weddings.”

With Gibsonton and the surrounding area growing, Philips also sees the potential for the newly revamped schoolhouse to host homeowner association meetings. “With more people coming in, we need more facilities,” she said.