ABWIG: The man behind the mission 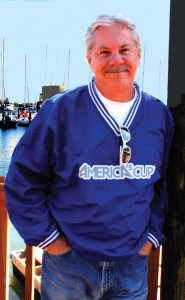 What would motivate a computer technologist to volunteer four and a half years of his life to a cause in a town in which he doesn’t actually reside?

Erosion has taken most of the two-acre beach and clogged the three channels leading into nearby residential areas. The ABWIG project will tackle the dredging work needed to free the channels and rebuild the beach, which will also be a boost to fishing, stimulating oysters, barnacles and other shellfish to flourish there.

Berkstresser keeps his 38-foot sailboat Wildfire anchored to a piece of property he and his wife purchased in Apollo Beach, where he hopes to build his retirement home one day.

“I’m an avid sailboater and have a circle of 250 friends who belong to TSS [Tampa Sailing Squadron] who are also into sailboating,” said Berkstresser. He said that members of the sailboat community would like to see the return of regattas and competitive racing to Apollo Beach, something that would not only revive the boating community but excite spectators and tourists as well.

With channels clogged as they are, many property owners are finding it difficult to get their boats in and out to enjoy their favorite water activities.

“The affluent boating community with big motor yachts may not choose to live in Apollo Beach because of the tide issue,” said Berkstresser, recounting the story of Apollo Beach homeowner David Ewing, whose 60-foot yacht Last Stop has been stuck in port for 18 months due to shallow water. Ewing is one of 2,600 waterfront homeowners in Apollo Beach who are frustrated by the current situation.

“It’s about property values and maintaining a way of life,” said Berkstresser. “If boats can’t get in and out, nobody is going to buy a house back there.”

Once the project is finished, three channels leading to the area will go from four to seven feet deep, opening up access for large yachts and sailboats. Major donors to the effort include Tampa Electric Company, Mosaic Company, Apollo Beach homeowners associations, real estate brokers, boating groups and private individuals.

Hillsborough County has kicked in $1.2 million to the project, which is expected to be complete by Memorial Day weekend.

“It’s a great feeling to see things so close to being a reality,” said Berkstresser. He is quick to point out, however, that he could never have done it alone. 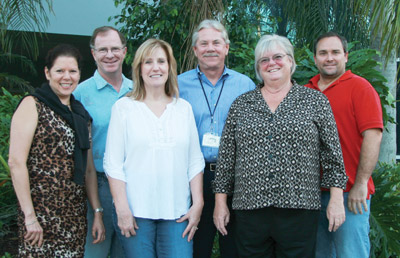 With a current board of seven hardworking members, as well as more than 300 volunteers who have devoted countless hours to the cause, Berkstresser said he hopes this will be the last time residents have to deal with the cost of dredging the area’s channels.

“You are never going to get a group of seven people to volunteer nearly five years of their lives again,” he said. “It’s time for the county to take over now.”

Berkstresser shares a seat on the ABWIG board of directors with a group of local volunteers, all who bring unique and individual talents to the table:

There’s Axia Moore, a 20-year broker-associate at Century 21 Beggins Enterprises, who wants to protect property values, support local business and bring the beach back for everyone to enjoy.

Fellow board member Pat Austin, who has been with the law firm Saxon Gilmore for 30 years, concurs. “Apollo Beach has been our piece of paradise since 1986,” she said. “I’m proud that our community is lending a hand to keep it that way.” Pat is an active member of the Tampa Sailing Squadron and president of TSS Youth Sailing.

Earlene Reid, a Hewlett-Packard software project manager, agreed to serve on the ABWIG board for similar reasons. Earlene relocated from the Orlando area in 2003, primarily to live on the water and to enjoy the small-town atmosphere of Apollo Beach. “My involvement in ABWIG was motivated by my concern about keeping my waterfront property accessible to Tampa Bay and points beyond.” she said.

Steve Latchford, who moved to Apollo Beach in 1997 to serve at MacDill AFB, says he made a commitment to the ABWIG project in order to be involved and connect with the community. Steve is currently a defense consultant with ATA-LLC, a Virginia-based data analysis and visualization company.

Melissa Nicholson volunteered for the first booth duty at the Manatee Festival of the Arts in 2011 and has been on the board ever since. Melissa is the payroll manager at Saddle Creek Logistic Services, a sailboat owner and a member of the Tampa Sailing Squadron.

Board treasurer Steven Alvarez, an Apollo Beach resident since 2008, said: “I’m just interested in helping our community become a better place to live.” Steven is an accountant and director of the Alvarez CPA firm.

“None of us had any particular expertise in marine reconstruction,” said Berkstresser, who works as a technology expert for Sunshine Health, a physician’s consulting firm in Tampa. He laughingly says he accepted the challenge to lead the project “in a moment of stupidity. I now know more about the marine construction business than I ever wanted to know.”

Berkstresser became inspired in part because of his previous passion for fundraising, which he says dates to his college days when he served as fundraising chairman for the American Heart Association. 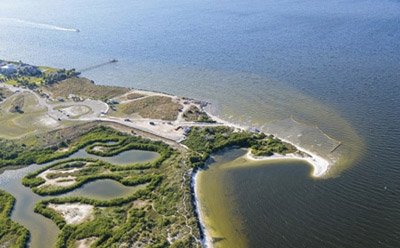 Aerial view of the site of the Apollo Beach restoration project.

ABWIG still needs to raise another $35,000 to complete the beach restoration project, and will be hosting fundraisers in the upcoming months to achieve that goal (and have a little fun in the process).

The next event, open to the public, is entitled Brews, Bands and FTs (food trucks) and is scheduled for Sunday, May 17, at the Tampa Sailing Squadron, 1250 Apollo Beach Blvd., from 1  to 6 p.m. Details for the event will be posted on ABWIG’s website and Facebook page. Donations are always welcome, and can be made through the ABWIG website at www.abwig.org.