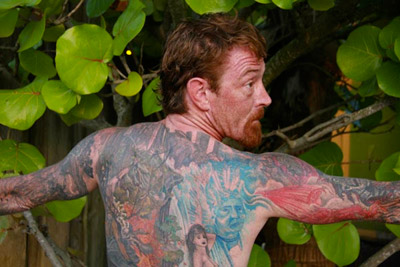 Take a stroll down any Florida beach and what do you see? Seashells, sunshine, tans and — tattoos?

That’s right, tattoos are everywhere these days. From athletes, pop stars and fashion models to college students, executives and housewives, there seems to be no limit as to who you might find sporting a tattoo. The tattoo industry is thriving, as body art becomes more culturally accepted and universally popular.

Although tattoos have been around since ancient times, the popularity of body art in the U.S. today is unprecedented. It has become a $1.65 billion industry, with an estimated 45 million Americans possessing at least one tattoo. 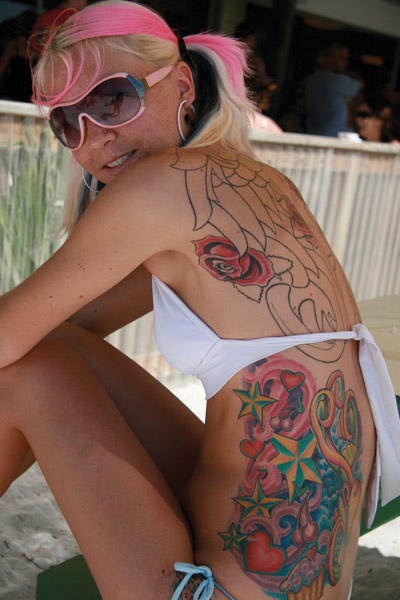 Gone is the stereotype that sailors and motorcycle gangs are the largest consumers in the tattoo industry. Statistics show that young women under the age of 30 are now the most likely to get inked, wearing abstract designs and motifs containing animals, butterflies, feathers and flowers.

People who have tattoos often say that they symbolize a special belief, event or person in their life, or that they feel more sexy, adventurous or rebellious by displaying tattoos on their bodies.

Cheryl Hanes, a 63-year-old grandmother of three from New Jersey, said she had a likeness of Marilyn Monroe tattooed on her upper arm to recapture the glamour of her youth. “There was so much beauty and style back in the ’50s — I wanted to have that permanently preserved on my body.”

Richard May, an Army veteran who served in Afghanistan, said his decision to get a tattoo was a more spiritual one. “I chose a cross and eagle claws to express my faith in God and my willingness to fight for my country,” he said.

Jaclyn Bullock, a former music major at Polk State College in Winter Haven, chose her tattoo to express her love of music, with the words: “Where words fail, music speaks.”

Unlike previous fads that have come and gone throughout history (i.e., the long-hair craze of the1960s), tattoos are essentially permanent. They are larger, more colorful, and more difficult to remove than ever. 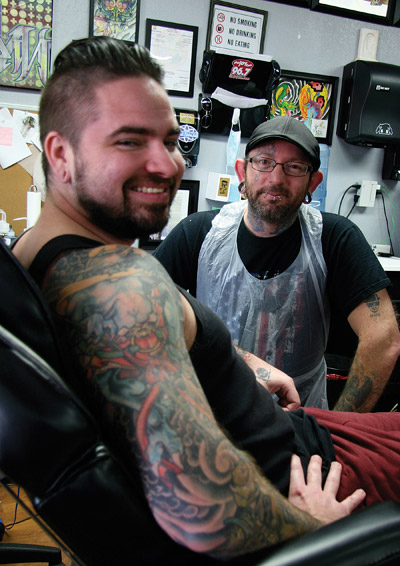 Tattoos today are larger, more colorful, and virtually impossible to remove. Above is artist Ben Lewis, owner of Believers Ink with a customer.

Getting a new tattoo can be a joyous, life-affirming experience, but it takes forethought and commitment. “People put a lot of thought into the design of their tattoo,” said Ben Lewis, owner and operator of Believers Ink in Riverview.

As a Christian shop, Believers Ink welcomes the customer’s ideas, but will not do designs promoting non-Christian values. “We stay away from art that portrays gang or criminal activity, racism, things like that,” said Lewis. “I have customers who come to me from as far away as Minnesota, because they like our commitment to our values.”

Mike Parsons, owner of Mike Parsons Ink in Riverview, is also well aware that the decision to add a permanent piece of art to your body is not a frivolous one. Working closely with customers to ensure they achieve their creative vision, Mike has become internationally known for his artistry and superior technique. Along with employees and fellow tattoo artists, Matt Lang, Derek Raulerson and Kurtis Todd, Parsons has enjoyed more than 10 years of success in the Florida tattoo community, as is evidenced by the “Wall of Trophies” displayed in his tattoo shop in Riverview. 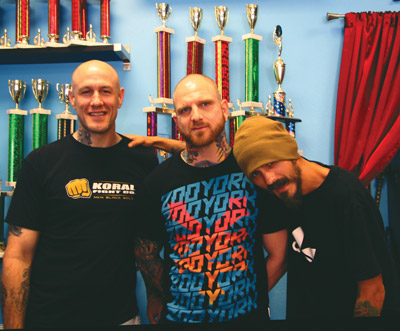 Standing in front of the “Wall of Trophies” displaying awards from national and international competitions are, from left, Mike Parsons, Kurtis Todd and Matt Lang of Mike Parsons Ink. Not pictured, Derek Raulerson.

Tattoos express individuality and creativity in a society that many feel is unsupportive of these values. For some, the decision to get a tattoo comes at a great personal cost. “My employer restricts the visibility of tattoos” said Mike Sturgis of Cleveland, Ohio. “But for me, it was important to express my identity despite the fact that I might lose my job.” In the U.S., the right for individual expression has been battled over since the birth of our nation, and it’s not a sentiment that’s likely to go away anytime soon. Whether you’re pro or con on the subject, it appears that the “Tattoo Craze” is definitely here to stay.