The ‘Boys of SCC’ to take the field at the Trop

With the Rays taking on the Red Sox on April 23, it is Sun City Center Night at the Trop. And the SCC Men’s Chorus will kick it all off by singing the national anthem. 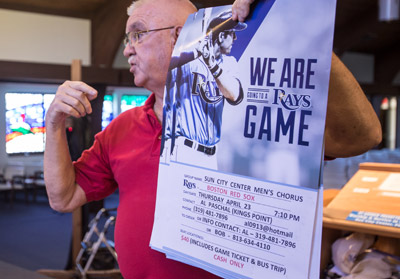 Al Paschal of the Sun City Center Men’s Chorus holds up a sign for a very important game. Not only will the Rays be taking on the Boston Red Sox at Tropicana Field, the game has been designated as “Sun City Center Night” at the Trop. Most importantly, the SCC Men’s Chorus will kick off the game, with attention and cheers of the sports stars and fans, by singing the national anthem. Mitch Traphagen photos.

Although spring has just sprung, the Boys of Summer are ready to take the field. Baseball is a purely American sport, it is our heritage and tradition, along with hot dogs and apple pie. Just across the Bay, technically closer to South Hillsborough than to the larger city of Tampa, is Tropicana Field, home of the Tampa Bay Rays.

And joining them in a few weeks, in the moments before a big game with the Boston Red Sox, the 2013 World Series champs, while players stand along the baselines with hats covering their hearts; while the American Flag flies in full glory on the field and on the enormous screens, will be the Sun City Center Men’s Chorus, singing the national anthem.

In fact, the game, to be played on April 23, will be declared Sun City Center Night at the stadium. It doesn’t matter if you don’t actually live in the community, it’s a perfect opportunity to enjoy an evening watching America’s game and hearing the voices of your neighbors singing our nation’s song to kick it all off.

The SCC Men’s Chorus, which is 30 members strong, was contacted by the Rays after a recent newspaper article about them. The group received a tour of the stadium, including what Robert Garrod, president of the chorus, said was the privilege of walking out onto the field, so they’d know what it would feel like. The only thing missing was the thousands of fans who will be cheering them on. Those fans may come for the game but almost nothing gets a stadium cheering like the live singing of the national anthem.

“We are very excited and motivated to sing the Star Spangled Banner as best as we can do it,” Garrod said. “We want people to remember us in a good way.”

Their performance should begin by 7 p.m., with the game starting at 7:10 p.m.

The Rays have made a limited number of tickets available to the chorus to offer for sale. Chorus members will be selling the tickets in the Sun City Center Community Association Atrium kiosk during the last week of March. Tickets including roundtrip bus transportation from the community to the stadium are $40. Tickets for those who prefer to drive on their own are $20.

The deadline for local ticket sales is April 10.

They hope to sell them all. Better yet would be if they have to ask the Rays organization for more to sell. It is an opportunity for all of South Hillsborough to stand together, for our neighbors singing the national anthem and for the hometown team in what should be a great game against the Red Sox.

On game day, April 23, the bus will depart at 5:15 p.m. from the parking lot behind the Samaritan Services  Building at the Community Association complex.

Sun City Center Night at the Trop is a nod toward what the so-called retirement community is quickly becoming: a place of great activity and note; a place where people who have much to share congregate and find new purposes, whether in honoring our nation in ceremonies or in song, or in helping students, or even in volunteering time to rescue homeless pets.

The SCC Men’s Chorus is an active group that is always open to new members joining in. On Saturday, they performed at the SCC FunFest — and their schedule reflects their appeal. 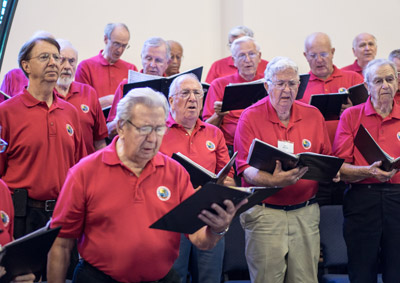 Robert Garrod, center, president of the SCC Men’s Chorus, says, “We are very excited and we want people to remember us in a good way.” Come out to the Trop on April 23rd and cheer them on. And then cheer on the hometown team in America’s pastime.

“We’ve had a very busy and successful fall and spring season this year, giving 10 performances throughout the general area,” Garrod said. The chorus currently has open dates for bookings for both the Christmas season starting in November, as well as the 2016 spring season beginning next January.

Garrod said, “We perform for groups ranging from the Sun City Center clubs and organizations to entire communities such as Terra Siesta in Bradenton. The performances run from 30 minutes to over an hour.”

Coming up next for the chorus will be a performance on April 12, their annual spring concert to be held at St. Andrew Presbyterian Church on West Del Webb Boulevard. The public is invited to attend, and there is no charge for admission, although “free will offerings” will be accepted to help the group cover expenses. The concert will begin at 3 p.m.

And then, 11 days later, the boys will take to the field, where they will have the full attention and admiration of sports stars and thousands upon thousands of fans in the Trop. It is baseball, America’s game. And the Sun City Center Men’s Chorus will kick it all off, singing America’s song.

On April 23rd, join them. Applaud for them. And then sit back and watch the action on the field — the crack of the bat, the cheers of the crowd, the sodas, beers and hotdogs that taste better at a baseball game than anywhere else. Cheer for the Men’s Chorus singing the song that unifies us all, and then cheer on the hometown team. It’s baseball. It’s Sun City Center Night. Play ball!