Have a chuckle, help a vet at Riverview comedy show 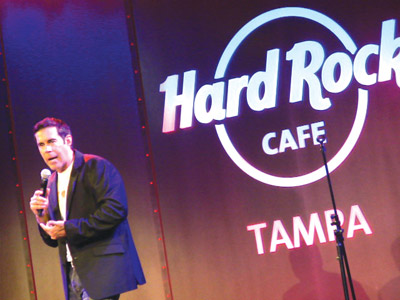 Looking for a chuckle or two? The Bucs aren’t playing, but there will still be some laughs to be had when The Regent, 6437 Watson Road, Riverview, hosts a comedy night on Friday, May 1.

Tim Wilkins, who has appeared on HBO, ESPN, “The Daily Buzz,” CMT, TLC and Lifetime, will headline the show that benefits South Shore Music Festival. Appearing with Tim will be South Shore’s own Brian Kleinschmidt and Heather Campese.

A Tampa native, Wilkins, who prides himself on a family-friendly, clean comedy show, has also opened for Aretha Franklin, The Righteous Brothers, Styx and Wynonna Judd, among others.

Last year’s festival, held Nov. 8 at The Showmen’s Club, drew more than 700 people for a day of music and fun. The event raised $7,000 for Honor Flight of West Central Florida (the group flies local veterans to Washington, D.C., to see the monuments created in their honor), Haley House (which houses the families of veterans during their treatments at the James A. Haley Veterans Hospital in Tampa), the Ruskin Veterans Day Parade and My Warrior’s Place (a Ruskin waterfront retreat for veterans and active military personnel).

This year’s event is set for Nov. 14 at the Showmen’s Club, with organizers hoping to draw larger crowds and feature more acts and activities. For more information on the event, to volunteer or find out how to become a sponsor, call Mike Self at 813-690-2201 or visit www.southshoremusicfestival.com.