Home News From large-scale murals to miniatures: The art of David Letterfly
News

From large-scale murals to miniatures: The art of David Letterfly 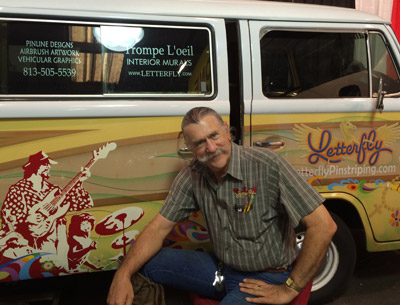 An 18-year resident of Plant City, Letterfly is best known for his airbrushed one-of-a-kind murals on RVs, and his fanciful graphics and pinstriping on motorcycles.

Growing up in the Midwest, Letterfly decided early on to pursue his own unique path of artistic development. Realizing that a college education was not his best route for learning, he chose instead to lead an unconventional life of travel and adventure.

He left home at age16 to pursue his two main passions — playing drums and painting — and changed his name from Knoderer to Letterfly in order to “give people a name they could actually spell and pronounce.” 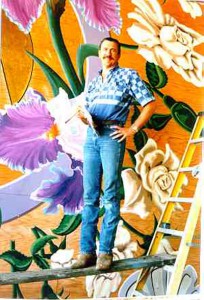 Letterfly began his career as an apprentice in a commercial sign company, learning large-scale lettering and scenery production.

He then became attracted to the carnival world, spending more than 10 years entertaining in the circus. An avid horseman, Letterfly created “dancing horse” acts, magic tricks, Punch-and-Judy puppetry, and performed music on both drums and the calliope, the traditional pipe organ of the circus.

The circus also gave Letterfly the opportunity to pursue his passion for painting whimsical artwork.  He was drawn to the ornate carnival backdrops and wagons adorned with gilded handcarved scrolls dating to circus art of the 1800s. Soon Letterfly was emulating these styles, painting large exterior and interior wall graphics for carnivals across the U.S.

He also delved into the delicate technique of gold-leaf gilding, which he used to paint circus wagons and fire engines.  This technique became a precursor to his later mastery of vehicle pinstriping. 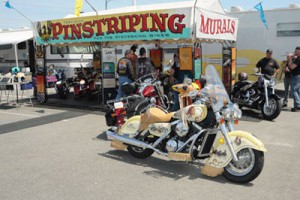 “I’m a dinosaur now,” said Letterfly, laughing. His “old-world” techniques have nearly become a lost art, replaced by computer-generated commercial graphics. “I still prefer my brush and paint,” he said.

He is currently working on a tribute painting for the International Independent Showmen’s Association Circus Museum in Gibsonton, commemorating artists Bill Browning and Johnny Bell, who were known for their hand-painted Fun House designs.

These days, Letterfly enjoys winters at his home in Plant City, where he rides horses, works on commissioned motorcycle projects, and conducts workshops for aspiring artists in his pole-barn studio. 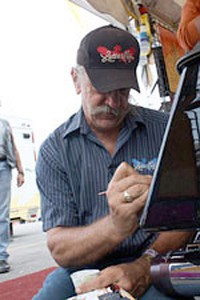 He also conducts airbrush workshops at the Ringling School of Art and Design in Sarasota, and at the Lazydays RV Supercenter in Seffner.

Each April, Letterfly loads up his RV and embarks on a six-month road trip, traveling all over Florida and the U.S. to bike festivals, trade shows and other large events where his art is in demand. Whenever possible, he fits art workshops and seminars into his exhaustive travel schedule, feeding his never-ending hunger for learning new styles and techniques.  “I’m a lifelong learner,” he said. “There’s always something new to learn.”

A class lesson: Strawberries come from out front of the Strawberry Market