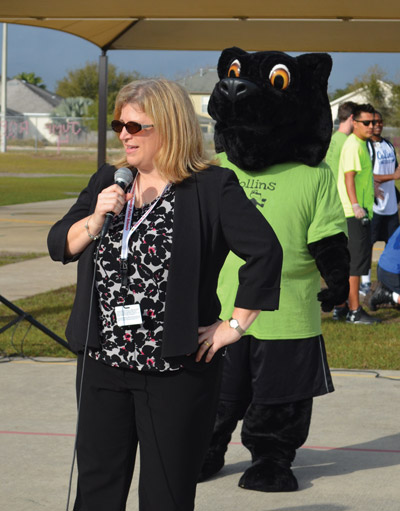 Rebecca Sargable introduces herself to students, staff and parents at Collins Elementary for the first time at a pep rally earlier this month at the school. Lori Themar photo.

About to take over as principal at Collins Elementary in Riverview, Rebecca Sargable sees the new position as a homecoming of sorts.

“My family is all here and my children go to school on this side of the county, and I was just looking to get involved with the South Shore community at a different level,” said Sargable, a fourth-generation Floridian whose family has lived in South Shore since 1993.

Officially principal of Lanier Elementary School in Tampa, Sargable will take over at Collins on April 27. She was named to the position last month by the county School Board.

“Education and safety are the goals for any principal,” Sargable said. “The difference is, when you look at Lanier, it only has 400 children while Collins has 1,100. That just speaks volumes about the population and economic growth in the South Shore area, but I am up for the challenge.”

Sargable is off to a good start at Collins, according to the school’s staff and supporters.

“Even though she doesn’t officially start as the principal for Collins until April, she has really been present at the school, attending the kindergarten art show and speaking to all the kids at the FSA [Florida Standards Assessment] pep rally,” said Lori Themar, president of Collins’ Parent Teacher Association, who met Sargable on the new principal’s first visit to Collins.

“I immediately got a great impression of her. I think she is going to be a great fit,” Themar said. “She reminded me of someone who I had already known for a long time. She has that kind of personality.” 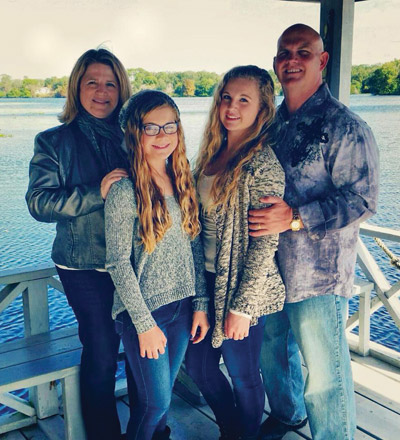 Teri Madill, an assistant principal at Collins, said Sargable has a lot of community ties and connections. “She has been fitting in well with the parents and the kids. I think it’s going to be a nice transition.”

Part of winning over staff and parents is that with Sargable “you get all of her attention,” Madill said. “If you have a concern, she wants to hear it. She’s really nice and very open.”

Sargable attended the University of South Florida, earning an undergraduate degree in early childhood education and later a master’s in educational leadership. Her first teaching position took her to Sulphur Springs Elementary, where she taught first grade.

A 13-year stint as a kindergarten and first-grade teacher at Boyette Springs Elementary followed. From there, she worked as an assistant principal at Roosevelt Elementary. She was appointed as Lanier’s principal in 2012.

Sargable initially thought she would retire as a kindergarten teacher.

While she enjoyed teaching, administrators saw something special in Sargable and encouraged her to consider moving up the ladder.

“Now my impact is schoolwide and I enjoy everything about it. I love it,” she said.

Sargable has no shortage of knowledge about local schools. She is married to Wili Sargable, a teacher and wrestling coach at Riverview High School. They have two daughters, Kyrstin, 15, a Riverview High student, and Cambree, 9, who attends Rogers Middle School.