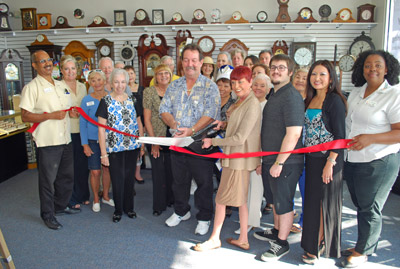 The Sun City Center Area Chamber of Commerce held a Grand Reopening ribbon-cutting ceremony for Boggs Jewelers on Monday, March 16. The jewelry and clock store moved from the southwestern corner of U.S. 301 and S.R. 674 to the Publix shopping center on the northwestern corner, in the same building as Cadence Bank. Sun City Center’s Honorary Mayor, Suzie Vong, was among the guests at the ribbon cutting.
Photo courtesy of the SCC Chamber of Commerce.

It won’t be long before the dump trucks and bulldozers show up at Village Plaza, a popular strip mall on Sun City Center Boulevard, to clear the way for a new Aldi supermarket.

Ocean Blue Realty Inc., the company handling the sale of the land, closed on the property earlier this month. Demolition of the current buildings on the lot is at least 30 to 45 days away, according to the company.

Wawa, a convenience store, has also submitted plans to open a new store across the street from the new Aldi supermarket on the southeast corner of the intersection. Wawa, famous in the Northeast for their subs, has been pressing hard in the Tampa Bay market lately. They opened a new store in Riverview earlier this year.

Village Plaza, at the corner of U.S. 301 and S.R. 674 (SCC Boulevard), was home to a jewelry store, a barber shop, a pet grooming store, a golf cart sales and repair shop, a TV repair shop, a beauty salon and a Spanish-speaking Alcoholics Anonymous meeting hall. There are also several empty storefronts in the plaza.

Current business owners in the plaza were told in January they must vacate the premises by March 14. The landlord for Village Plaza, Frank Diehl Farms of Wimauma, refused to comment on any impending sale of the property or verify reports tenants had been asked to move, but business owners confirmed receipt of a Jan. 14 letter saying they had 60 days to leave.

Business owners were in the dark about who would take over the plaza.

Boggs Jewelers has already held the Grand Reopening for its new location in the Publix shopping center across S.R. 674.

Ray’s Golf Carts Sales and Service, which moved to the plaza in 2009, already has a new home at 761 Cortaro Drive in Sun City Center.

Gordon Dimmock of Ray’s Golf Carts was “less than pleased” when he received the Jan. 14 letter saying he would have to move by March. “We bought the business on Dec. 17, and as part of the process we took over the lease and assumed we were good to go,” he said. “Now to move has cost us a small fortune.”

Speaking of other business owners in the plaza, Dimmock said it wasn’t a surprise to some. “I think they were expecting it,” he said.

From large-scale murals to miniatures: The art of David Letterfly