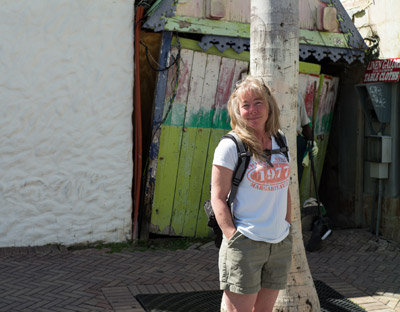 Home is where the heart is, whether on a Caribbean island (as pictured above), in New Jersey or Apollo Beach … mine will be waiting for me at Tampa International Airport today. Mitch Traphagen photos.

I  am on a JetBlue flight from Tampa to New York City’s LaGuardia airport  — at 37,000 feet, traveling at 550 miles per hour, currently somewhere over South Carolina. For the past year, I’ve flown back and forth between those two cities monthly, sometimes more often than that. And mixed in were other flights, mostly to Minnesota to see my Mom.

This, however, is my first flight since we moved back to the Tampa Bay area in January — which almost certainly has been the longest time I’ve spent on the ground since 2011. I don’t have to fly to New York anymore. I haven’t been back to Minnesota since attending the funeral of a friend’s father, who passed away only weeks after my Mom passed away last year.

So now, flying into New York is different. I won’t be going there as one of the teeming masses who call it home; I’ll just be another middle-aged, slightly pudgy tourist with a camera (actually, five cameras) in my case.

I’m not sure what to make of that. I loved living up there. But I also love Florida, I love my job and the people I know and encounter on a daily basis. But still it is hard to realize that no one will greet me at the airport. I shouldn’t be this conflicted about anything at my age — I know full well that I’ve already had more birthdays than are yet to come. Internal conflict should be for the younger folk. 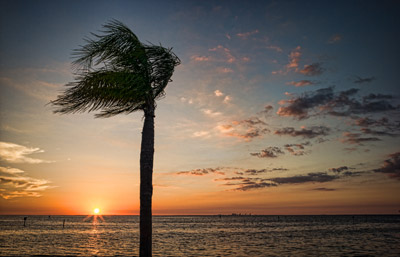 There are far worse things to fly home to than this.

I’ve landed at LaGuardia, found my shuttle to Midtown Manhattan, where a train will take me to my hotel not far from where I once lived, enduring the normal, unholy crawl on the freeway and generally entering what I now realize is a cacophony of traffic, tourists and general madness. What was once normal now seems foreign, but there are little bits here and there that reminded me of … what was home. I told a nice woman who worked for the shuttle company that I wanted a luggage claim check because it had a coupon from one of my favorite stores in New York. She made sure that I had claim checks and coupons to last a lifetime. People are really very nice in New York. Except for the few that aren’t. But most are.

I people-watched on the train, which is always fun, and remembered that, by and large, people seem happy here. They are getting out and doing things. Most people seem reasonably comfortable in their own skin. But I also realized anew just how maniacally bipolar this city can be: A person with a $3,000 watch or wearing $5,000 in clothes could be standing next to the blind man (or a guy who plays one very well) who repeatedly cries out, “Anyone have a dollar for me?”

A recent article in The New York Times Real Estate section — probably a thousand or so words — told the story of children picking out multimillion-dollar homes for their parents. Seriously! It began with a 14-year-old visiting a friend and seeing his place. The friend said there was a condo available in the building. The kid ran home and looked it up online. Sure enough, it was available and for only $14 million!  He told his parents about it because, you know, living on Central Park West with a view of Central Park apparently isn’t the height of perfect, but they told him that they just didn’t have $14 million. They did, however, humor Little Johnny and go to take a look at the place. And guess what? It turns out they did have $14 million, and they ended up buying the place! Perhaps checking the couch for loose change helped.

There were more such stories, but I just couldn’t take any more of it. There were, however, several hundred comments from readers, almost universal in their disgust — which is probably exactly what the Times expected.

When I was about to turn 14, I kissed a girl for the first time, a very cute girl named Gena, and we were watching the bicentennial fireworks, sitting in a crowd of people near the shore of the lake in our small Midwestern town. My feet didn’t touch the ground for days after that, and I had no concept of $14 million homes. I’m kind of sad for the kid who does because he should be thinking about other things at that age. But the Times is an excellent showcase for such tidbits — and seriously, if you can’t afford to pay $1.1 million in cash for a nice studio apartment so your kid can easily commute to college, well, then, I guess you’ve simply failed. Because it sure seems like damn near everyone else can.

I am in New Jersey, just minutes away from the $14 million homes in Manhattan (and believe me, that’s not the high-class stuff in that city anymore). It is all so easy, so habitual. It’s easy to get on the train and go places. A mother with a stroller boarded just as I took my seat, so I offered it to her. She knew I had nearly 30 years on her so she politely declined. She was nice enough to let the old people (me) sit. I walk the streets I walked as a resident only months ago and ordered a gyro (pronounced “GUY-ro” — try it another way and you will be politely but firmly corrected) and went back to my hotel room. I like it all: I like the buildings and the teeming masses and the sky. But it’s not my home; not anymore.

In a few days I’ll be on a flight back to Tampa. Who knows when I’ll ever come back up here? I wonder how much different it will feel then. But it really doesn’t matter.

Maybe we end up where we belong. On that note, kids shouldn’t be making decisions on $14 million homes, they should be making out with cute girls (or boys, as the case may be — and within reason, of course). In a few days I’ll be home, where it seems I belong, among friends, the palm trees and the sunshine.

And someone will be waiting for me at the airport.