In Florida, long before there were beachfront condos, there were cowboys. 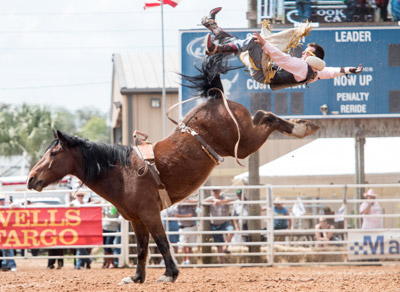 This would seem to hurt: Saddle bronc rider Justin Miller of Billings, Mont., goes skyward on a hard kick from his horse. Miller walked away from a hard landing. Mitch Traphagen photos.

A hoof stomped. The sound it made was as soft as the dirt, now imprinted with a horseshoe, creating a cloud of powdery dust rising up. In a land so flat, that cloud didn’t appear to be all that far away from the enormous white clouds that were perfectly delineated from the deep blue sky. It was a day that could only be in Florida.

When your career and your very life can be made or taken in eight seconds, you are probably good at getting religion in a hurry. Rodeo riders, particularly saddle bronc riders, are tough men. In eight or so seconds, they endure an earthquake, hurricane and tornado, all while trying to hang onto an animal of immense power. They are also competitive — but in being so, they are smart. As much as it is a sport that is purely individualized, they are in it together. As the cowboys stretched and loosened up in the chutes, waiting for the sheer pain and pandemonium of what was to come, several exchanged hugs. They are men.

In Florida, long before there were beachfront condos, there were cowboys. In fact, they were so tough, they were actually called “cowmen,” or sometimes “Florida Crackers.” They were among the state’s first inhabitants, arriving in the 1760s, shortly after Florida was transferred from Spain to Great Britain. They were frontiersmen (and women) who not only survived a sometimes-brutal life and climate; they thrived and prospered, helping to build Florida into a global agricultural powerhouse. Even after the arrival of Disney, agriculture was one of the, if not the, largest industries in the state. Although tourism and construction have since taken the top spots, agriculture remains critically important to the economy.

The Arcadia All-Florida Championship Rodeo created traffic jams in the small central Florida community just east of Bradenton. Twenty thousand or more people were expected to have turned out for the event, which began on Friday and concluded on Sunday. The cowboys and cowgirls came from all over, as did the fans. There were retirees and there were children. There were old cowboys and there were computer programmers. While the riding events — from saddle bronc to bull riding; calf roping and wrestling to the intensity of barrel racing — were the main draw and the focus of the extreme talent and endurance on display, it also had the atmosphere of a circus. A circus that could only happen in America. 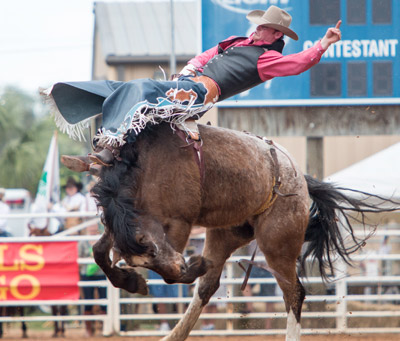 Kyle Brennecke of Grain Valley, Mo., makes it clear that saddle bronc riding can involve some pain for the rider. Brennecke held on to the end.

It doesn’t matter if you are a native-born Floridian, a transplant or snowbird from the Northeast, or even a tourist from Canada or Europe, at the Arcadia Rodeo everyone was an American. To these cowboys, the only thing that mattered more than their horse, hats and boots was the flag. Although baseball may be known as America’s sport, it is rodeo that exemplifies American individualism and spirit.

They call the Arcadia Rodeo the Granddaddy of Them All. Now in its 87th year, it is one of the oldest operating rodeos in the Sunshine State. Despite that Florida is known around the world for beaches and sunshine, rodeo still thrives here. That such a tradition exists, and actually prospers, says a great deal about the dignity and resolve involved with it. Started in 1928, the rodeo survived the Great Depression and more. It has also evolved — extreme care is taken to avoid injury to any of the animals. Even beyond any emotional aspects, those animals are also livelihoods.

The cowboys, however, aren’t always so safe, despite the extreme care and professionalism of the companion riders there to rescue them if needed. Despite the danger, it is a display of what ranchers do every day to provide this nation with a bounty of food. These men and women just happen to be among the best.

Prayers were spoken, the flag was saluted — and a dozen or more were flying around the Mosaic Arena right in the heart of Arcadia. A group of locals put on an Old West show, complete with a shootout, to kick off the event, and then the rodeo began with a bang: saddle bronc — the toughest eight seconds of anyone’s life. The pace was so fast that only photos shot at eight frames per second could capture the pain and intensity of what the riders endured. In the early round, the horses were fresh and ready to go. One cowboy was thrown toward the sky, another was literally dropped by the horse, and just as he removed his hat in frustration, a hoof kicked past his head at lightning speed, with only a few inches making the difference between life and death. If that had been his ending, he would never have known what hit him. They are not only tough, they are brave — certainly with commonly and crudely described male body parts being made from steel.

Outside the arena, tourists in shorts and sandals bought cowboy hats, lemonade and beers, along with everything else imaginable. Town people crowded the fences outside and around the arena, many sitting on their bicycles, to catch just glimpses of the action.

And those glimpses were spectacular.

The horses were geared for the barrel racing. The riders had to work to keep them at bay until the gate opened, gazing forward with laserlike intensity at the first sign of the moving gate, while having to side-step their own horses, literally raring to go. When that gate opened, the horses exploded out with the riders guiding them with precision and skill that defies belief. How could the horses dig so hard to round a barrel and remain upright? How could the young women riding them possibly hang on, always with eyes ahead to the next barrel? It was an amazing convergence of human and animal — both working toward a goal, doubtlessly after years of work to achieve it. One 13-year-old girl from Florida was performing in public for the first time. On the first barrel, her horse paused and bucked — she held on, regained control and finished the race in a fury of kicked-up dirt and speed.
Mosaic, the lead sponsor for the event, unveiled plans for a new arena during this, the 87th running of the rodeo. It is estimated that 94 percent of those who attend the rodeo come from outside of its home, Desoto County. It is an event of great importance to the community. The cowboys and cowgirls come from all over the United States and Canada.

There are legends of an enormous swath of Central Florida being completely without fences to enable huge cattle drives of old. Agriculture made Florida, and in such a place, men and women could accomplish it only by working together. That spirit lives on at the Arcadia Rodeo. There is competitiveness and there is rugged individualism, but there is also camaraderie, all under the stars and bars of the American Flag. The action is frenzied but the pace is leisurely. It is Americana alive and on full display.

And for many, it could all end in eight seconds or less. Say a prayer, look up to the clouds, perfectly delineated against the clear blue sky, and hang on for dear life. A horse stomped his hoof. This time, it wasn’t soft at all.

And then the chute opened.

Florida is home to some of the nation’s best rodeos. Included are the Tour of Champions (barrel racing) in Ocala on July 11; the IPRA Professional Rodeo in Naples on Aug. 27; and the Open Christian Rodeo in Wauchula on Sept. 8. In Arcadia, the next event, the Youth Rodeo, is taking place this Saturday, March 21. The event is free.