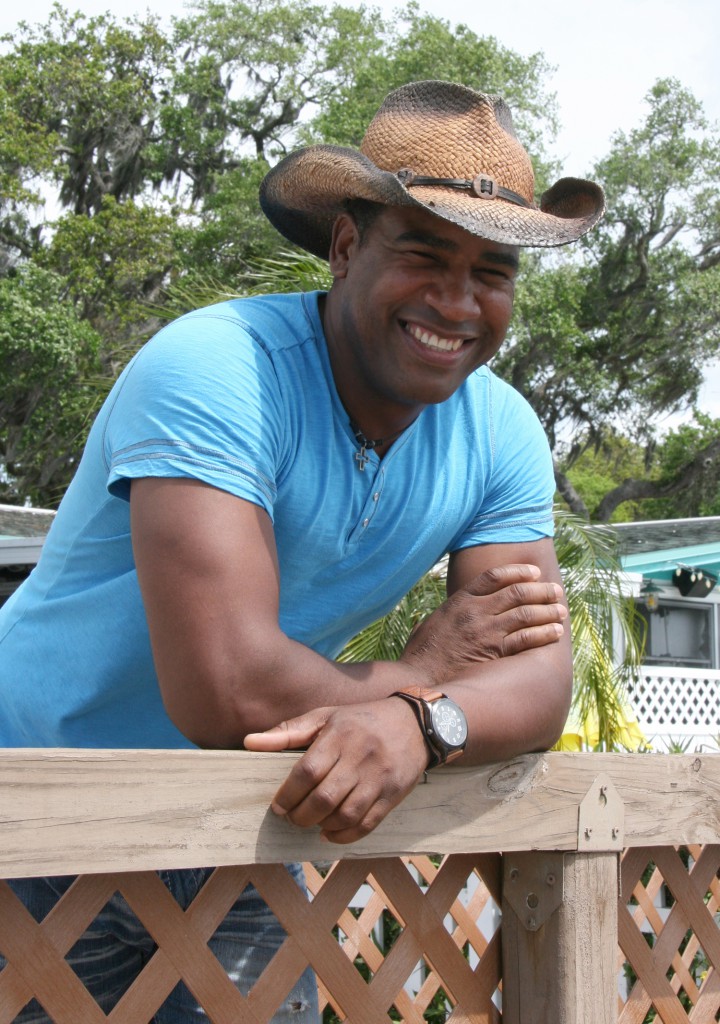 Julian Riviere knows how to blend tropical music, or “trop rock,” with classic American country in a way that is inventive and wholly unique.

And well he should. Born and raised on the Caribbean island of Dominica, Riviere is as authentic an islander as you can find. And with 12 years of experience in the U.S. playing country music in a vast array of venues, including the famous Tootsies of Nashville, he said: “I think my background and experience have given me something special that sets me apart from the rest.”

Now headquartered in St. Pete Beach, Riviere and his band, Caribbean Cowboy, perform for audiences all over Tampa Bay. To date, the band has released five CDs, and has another one on the way: Rope a Coconut, which is expected to be out by June.

With several national tours under its belt, the band also enjoys staying close to home, performing in venues like Woody’s River Roo in Ellenton; The Showmen’s Club in Gibsonton; The Salty Rim and Sea Hags Grill in St. Pete Beach; Caddy’s on the Beach in Treasure Island; Gecko’s Grille and Pub in Sarasota; as well as dozens of annual festivals, street fairs and bikefests.

Riviere credits his Caribbean roots for shaping his unique musical style. His face lights up when he talks about his homeland of Dominica, which he calls “the most unspoiled of all the Caribbean islands,” a place where he attained celebrity status performing and winning awards in national music competitions.

“People ask me why I would want to leave such a beautiful paradise,” said Riviere, “but my desire to become an American country star was strong, and I knew I would have to come to America to pursue my dream.”

Influenced by country artists such as Travis, Haggard and Garth Brooks, Riviere envisioned a crossover from his island roots into mainstream American country music. “I wanted to make it as a country songwriter and singer,” he said. “But I wasn’t prepared for all the challenges I would face, being a foreigner trying to break into the music industry in America.”

Riviere spent several years in the U.S. building his reputation and honing his musical skills in small pubs, nightclubs and corporate events, finally traveling to Nashville in 2008 to record his first solo CD.

While in Nashville, he competed in songwriting festivals and connected with key producers in the industry.

“I got an overwhelming positive response,” said Riviere. “It was such an exciting experience, but it was very difficult to financially support myself because everyone in Nashville plays to showcase their talent — without pay.”

Traveling to Nashville, Riviere had concerns about entering the country music scene as a dark-skinned man, citing the experience that Charlie Pride, one of his heroes, encountered in the early 1960s. Pride, the son of poor sharecroppers, rose to fame to become one of the all-time best-selling performers for RCA Records (second only to Elvis), and one of only three African-Americans to be inducted as a member of the Grand Ole Opry.

Pride was signed to RCA records in 1966, at a time when country music was considered a white medium, and for two years there were no pictures of him distributed by the record label in an effort to avoid racism.

“Charlie had to hide the fact that he was black,” said Riviere. “It was only after people heard his records and fell in love with his music that he was accepted.” Riviere laughed and said: “If they ever make a movie, I’d be the perfect person to play Charlie Pride. I look like him and sound like him.”

Today, Riviere stays busy playing in clubs and large events throughout Florida, earning a comfortable living. “I did six shows this week,” he said. “And I never get tired because I’m doing what I love.”

He sometimes misses his home in Dominica, where he still has family and friends.

“Living in Dominica is a lot like living in a small town, where everyone knows each other,” he said. “They keep it clean and green, with no international airport or large hotels, just small cottages, clean beaches, beautiful mountains and fertile land.”

Next week, Caribbean Cowboy will appear at the Moose Lodge in Ruskin on Friday, March 27, from 7 to 11 p.m. For more information, visit www.caribbeancowboy.org or call the Moose Lodge at 813-645-5919.