If you thought St. Paddy’s fête lasted only a day … 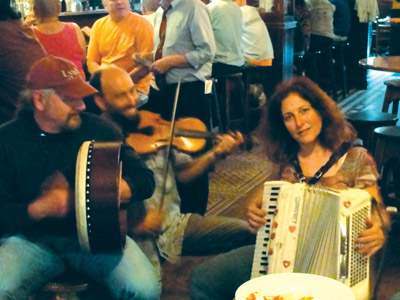 As an Irishman — I was born in Belfast — March 17 was always more of a religious holiday when I was a child.

It has since morphed into a celebration of all things Irish, and that involves a lot more than just drinking.

While the Irish have given the world great writers, poets and playwrights — think James Joyce William Butler Yeats and Samuel Beckett — authentic Irish music has sometimes taken a back seat on March 17.

If you do come across a performance of “Irish” music, it’s likely a bloke with a drum machine and guitar who doesn’t know Molly Malone from Miley Cyrus.

Thankfully for those who saw more to Tuesday’s St. Patrick’s Day than staring through a pair of green beer goggles, there are still several local events taking place that will satisfy that thirst for Irish culture.

The Borini Theatre is celebrating St. Patrick’s Day with a free social dance with the Kings Point Line Dancers at 7 p.m. Wednesday, March 18. The event is open to Kings Point and Sun City Center residents and their guests. For information, call Jan at 813-634-6226.

The Firehouse Cultural Center, 101 1st Ave. NE, Ruskin, plans a St. Patrick’s Day concert with Mike Donahue and his fellow musicians playing joyful and nostalgic Irish and Celtic melodies. The event is set for 7:30 p.m. Friday, March 27, with doors opening at 7 p.m. Tickets are $15 nonmembers / $12 members in advance. Tickets on the day of the show are $20 nonmembers/$15 members. For more information call 813-645-7651 or visit www.firehouseculturalcenter.org

For those who want to travel further afield, an Irish session — or seisiún in Gaelic, Ireland’s native language — is about as close as you will get to it without actually buying a plane ticket to Dublin or Belfast.

Sometimes described as the “heartbeat of Irish music,” a seisiún is an informal gathering of musicians to learn, practice and perform traditional tunes and songs.

Finding seisiúns is now a little easier, thanks to a new interactive map of Irish pubs that debuted this week online. The map lists more than 300 authentic Irish pubs across the U.S., several within driving distance of South County.

“A traditional seisiún brings more than the music with it,” said Robert Hogan, an Irish native who moved to New York in 2002 at age 19, and helped with the map project, which took several months to assemble.

“People are listening, laughing, talking; they connect at seisiúns. There’s none of this ‘I make $500,000 and have two Ferraris.’ It’s just good craic and a pint,” said Hogan, whose website, www.shamrockgift.com, is one of the major importers of Irish musical instruments and Irish-made goods in the U.S. (Craic is an Irish term for fun, laughter and generally having a good time.)

Didn’t want to fight the crowds near the holiday? All the pubs listed feature Irish music throughout the year, not just on St. Patrick’s Day.

And if you did happen to hoist a pint on March 17, I hope you said Sláinte.

I will let you figure that one out for yourself.