Family to family: new ownership for The Observer News publications 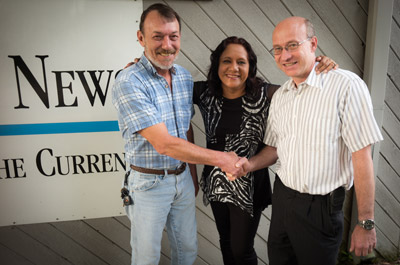 David Payne and Karina and Wesley Mullins are the new owners of The Observer News family of publications through a purchase deal that was completed last week, after five years of work. Wes Mullins has been CEO for more than 10 years. Payne came to the company six years ago from a 29-year career at the Bradenton Herald. Mitch Traphagen photos.

In the early 1960s, the Mixon family opened a printing business that would change the face of South Hillsborough. And shortly after, their Shopper newspaper soon absorbed another, struggling newspaper to form the Shopper and Observer News — it not only gave the largely rural area a voice, it gave it a presence. Today it remains the only locally owned newspaper covering South Hillsborough County, now part of a metropolitan area of more than four million people.

Over the years, much has changed in the printing and newspaper business, but at this newspaper one thing has not: The focus remains on customers. The customers, of course, are also neighbors. After nearly six decades, with massive growth in both South Hillsborough and in The Observer News, The SCC Observer and The Observer-Current newspapers, an intense focus on servicing the needs of the customer, advertisers and readers alike, is the driving force behind the business. And for the latter, providing the best possible editorial product for the readers, a process that puts them first, also provides the best possible service to the advertisers. The business is living proof that ethics, hard work, fair play and a love of this area and the people living here are enough to continue and grow with success in an ever-changing business landscape.

Paraphrasing the company’s motto: Our roots do indeed run deep.

But now, after 56 years, a change in leadership has come to M&M Printing and The Observer family of newspapers. It does not involve, however, a new broom sweeping clean. The sale is largely, if not symbolically, from one family to another. Mickey and Priscilla Mixon, for decades fixtures in South Hillsborough, have sold their family business to Wesley and Karina Mullins and David Payne. Wes has been CEO of the company for more than 10 years. David, a 29-year veteran of the Bradenton Herald, has been with the company for six years.

There is the old perception of the tough, jaded newspaper editor with well-used bottle of bourbon hidden in a desk drawer. In more than a decade at The Observer, I’ve never seen a bottle of bourbon, but I certainly wouldn’t fault anyone for it. Owning and running a newspaper is a demanding job. You are putting everything of yourself out there for tens of thousands of people. You carry a responsibility that simply cannot be shirked or shrugged off. In many ways, you represent the community at large, and you must do so with a fairness and accuracy that is staggering.

On top of that, you have employees to be responsible for — jobs are at stake. There are ups and downs, and mistakes tend to stick — so they have to be few and far between. The bottom line is to hire the best people, keep them and trust them. On the latter, you have no choice.

Mickey Mixon did just that.

“I always believed in hiring the best people that I could and then I’d get out of their way,” he said. “I really want to thank all of the loyal employees I’ve had — they made it happen.”

Actually, Mixon made it happen. When times were rough, he took the punches. He didn’t shut down, he didn’t give up — he carried on. And on the occasions when things were darkest and temporary pay cuts were necessary to stay afloat, he took a pay cut, too.

He did it all at The Observer and M&M Printing. Despite owning the company, he could often be found covered in grease, working on the press. Or loading up his pickup truck to make deliveries. He did what he needed to do to keep the company moving forward. And with that came success. And because of that commitment, a community developed a presence through the pages of a growing newspaper.

“I’m very proud of what this company has accomplished,” Mixon said. “What that means is that I was successful. I’m not lucky; I never have been lucky. I always took a lot of pride in my work. There is honor in work.”

And it is to his honor that the first newspaper in South Hillsborough, now more than a half-century old, is still running and is increasingly successful. Mixon’s legacy, the legacy of his family, will live on.

His wife, Priscilla, was there to provide support every step of the way.

“Priscilla never worked at the newspaper, but she was my support, my team,” Mixon said.

She also believed strongly in community service through a variety of means, including acting as executive director for the Mary & Martha House beginning in 1982.

“If we could help and get something good going in the community, I wanted to do it,” Priscilla said. “When we had the newspaper, we belonged to this community, we were connected to it. Now that’s gone — and it’s with very mixed feelings. But we waited for the right people — people who cared about the community as much as we have. We believe we found them in Wesley and Karina Mullins and David Payne. We are excited about this sale and hope the community will be, too.”

The process has been a long one — while many newspapers today are struggling under corporate ownership, a family-owned community newspaper is special. The sale technically began five years ago, when Mickey was diagnosed with cancer, now in remission.

“Community newspapers are run by people who have a special interest in what is going on in the community,” Wes Mullins said. “We live here, we care about the people and the area. We don’t have a board of directors that exists somewhere else.” 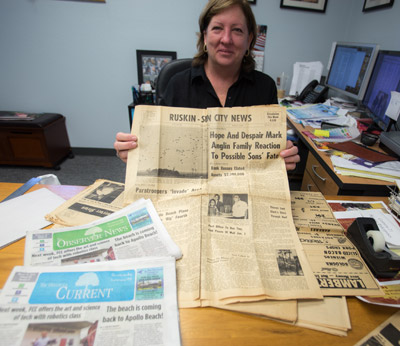 Over the decades, The Observer has changed as times have changed. Priscilla Mixon said that her family was always ready to change with the times. But the greatest growth, perhaps, has come over the past 15 to 20 years. The late publisher and editor, Brenda Knowles, was a fountain of ideas and commitment. She created a newsroom, for all intents and purposes, that was better than anything that had existed before. Her legacy, and that of Mickey, his brother Dennis, and wife Priscilla, lives on today.

“Everybody here is still working for the same common goal,” Mullins said. “To serve the community, the people and the businesses in this area.”

With roughly 115,000 readers in print alone, and more than 300,000 page views on the Web, it is not possible to call The Observer a small newspaper any longer. But it is still a family enterprise. Mullins, who has been known to bring meals to employees and freelancers who have been injured or have fallen ill, sees to that. And there with him is his wife, Karina. Payne is not only an owner; he is a part of that family, too. And that is how they all see the community and the company.

On a recent Wednesday, with the press running (yet another major, recent investment in creating a better newspaper), Mullins could be found in the huge chamber, or checking on a computer that fed data into the enormous machine that created magic on newsprint. Payne was there, too, a smudge of ink, or perhaps grease, on his jeans, when he wasn’t loading up a completed order into the back of a truck or greeting customers at the front desk. In a family, everyone pitches in.

“The ownership may be changing, but we have been actively involved in this business,” Payne said. “Our business is to be the local community paper — and all we want to do is to grow the paper. We want to expand the paper with more items and articles; we want to add more color to it. We have a lot of ideas about how to make it even better for our readers and advertisers.”

“In buying this, I wanted to be even more a part of this community,” said Mullins, who has lived for years with his family in Ruskin. “It’s a great area to be in. It’s growing, there is so much potential here.”

Wes Mullins and David Payne went back to work, alternating between computer terminals and large pieces of machinery. Their sense of obligation is solemn and runs deep, just as does the history and foundation of the company they now own.

“By serving our readers, we are serving our advertisers,” Mullins said, referring to editorial independence. “I go to the paper to find the people who can take care of the things that I need. But we also give people information about what is happening in the area.”

He paused for a moment, took a phone call and then looked around his crowded office.

“This is very exciting,” he said. “We have the opportunity to grow along with this growing community.”

Their newspaper has been doing just that for decades, and now the new owners are ready to take on the future. Some things never change.