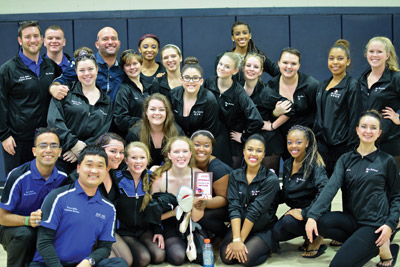 The ladies of Blue Radiance with director Herman Rios (back row, third from left) joined by staff members and the Band Program administrative team at Durant High School after winning first place in Class AAA and being promoted to Class AA on Jan. 24. Travis Miller photos.

Riverview High School’s color guard, Blue Radiance, collected yet another first-place trophy Saturday, March 7, at the Florida Federation of Colorguards Circuit (FFCC) Regionals in Orlando. It was the sixth straight first place for the team, which is ranked first in the state in its division.

As the results were announced, “It was really nerve-wracking,” said Lindsay Dibble, 17, a member of the Sharks’ color guard team since her freshman year and current captain of the squad. She said, “They just kept reading the places [of each team], ‘8, 7, 6, 5,’ and it finally got to first place and we had not been called yet; it’s just an adrenaline rush.”

In only its second full season on the FFCC circuit, the 19-member Blue Radiance team has nonetheless made winning a habit. In 2014, the team placed first in Class B at the FFCC’s Premier contest by such a large margin that they were promoted to Class AAA. The team came in first again at this year’s Premier contest and won promotion to Class AA.

The winning streak has continued. Since taking first at the Premier event in January, the team has placed first in every FFCC regional it has entered, including the team’s most recent win in Orlando. 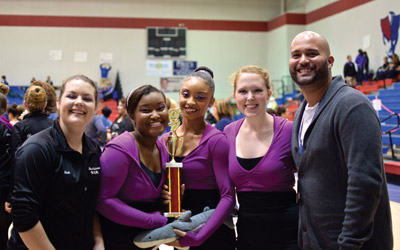 The color guard team is the most successful in the school’s 16-year history.

Color guard is a movement-based program involving the use of equipment such as flags, rifles and sabers, and it provides the majority of the visual effects for the marching season, according to the team’s website.

Hard work and practice — the team practices six hours a week, more when they are preparing for a competition — have made the difference, said Herman Rios, Riverview’s color guard director, who joined the team last May. David Duffy oversees show design.

“It’s me pushing them hard and the girls pushing me hard,” said Rios, who works full time as a nurse, teaching color guard on his spare time. “We also have very supportive parents and a very supportive band director [in John Davis].”

Rios has made a difference since he was hired, said assistant marching band director Travis Miller, a 2011 graduate of Riverview who holds a bachelor’s degree from the University of South Florida.

“He has a really strong focus on fundamentals and just teaching the girls to perform. But I think more important than that, and what made me give him my vote of confidence, was his interest in the girls’ overall well-being.” 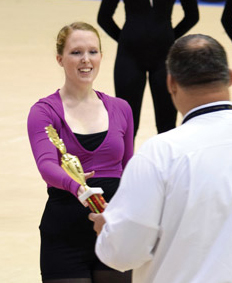 While Rios is the director, “he also has a genuine interest in what they are doing academically, how their day has been and what other extracurricular activities they are doing,” Miller said. “He really has a personal connection with all of them that I think all of the girls as well as the parents really appreciate.”

“We have a strong team this year that is willing to work hard, a new set of instructors and everything just seems to be falling into place,” said team captain Dibble.

Mark the calendar for next month for a chance to see the award-winning team in action. The color guard plans a recital at 7 p.m. Monday, April 20, in the Ron Wardlow Gymnasium at Riverview High.