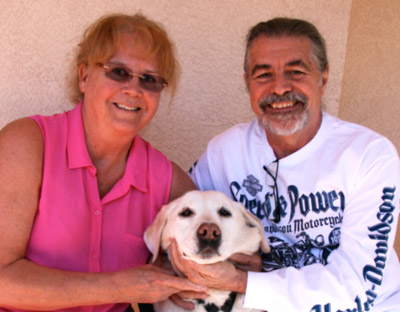 Animals are their passion, say Dennis and Juanilla Lubrano of Apollo Beach. As the couple recounts their 15-year history as animal rescue activists in Hawaii, Utah and Nevada, the joy on both of their faces is plain to see. “Anyone can help with animal rescue,” says Juanilla. “All it takes is compassion.”

The Lubranos moved to Apollo Beach two years ago, answering the call to become caregivers for Dennis’s aging father. Working weekends at the Covington Park clubhouse, Dennis began launching his campaign to network with Apollo Beach residents and local animal rescue groups. Utilizing social media, along with “good old-fashioned word-of-mouth,” Dennis began developing his personal mission to further the cause of saving animals, not just on the local level but worldwide.

“Every person, no matter what their age or experience, has something to offer,” says Dennis. “My goal is to educate, inspire and motivate people to donate their time and talent toward saving animals.”

An animal rescue group takes unwanted, abandoned, abused or stray pets and attempts to find suitable homes for them. Most rescue groups are run by volunteers, who take the animals into their homes and care for them until a suitable permanent home can be found. Rescue groups exist for most pet types (reptiles, rabbits, birds and horses), but are most common for dogs and cats. Most rescue groups have adoption procedures, including completing an application, checking a veterinary reference, conducting a phone interview and a home visit.

To reach individuals and groups who may be interested in becoming involved in animal rescue, Dennis Lubrano has created a number of informative Facebook pages and blogs, where people can share experiences, concerns and questions. His current project involves motivating local senior citizens to volunteer. With more than one billion senior citizens worldwide, Dennis feels that this age group could have major impact on animal rescue on a global scale. He is also concentrating effort toward mobilizing Florida Harley Davidson riders to support animal rescue.

In the U.S., there are three classifications for pet rescue: a municipal shelter, which houses stray and abandoned animals on behalf of local government; “no-kill” shelters, which are usually private organizations that specify that no healthy, pet-worthy animal be euthanized; and not-for-profit rescue organizations, which typically operate through a network of volunteer foster homes.

The Lubranos volunteer their residence in Covington Park as a foster home for lost and injured animals, giving them food, shelter and medical care until a permanent home can be found.

“It’s emotional for us,” says Juanilla, who hand-sews dog bandanas and blankets to donate to local rescues. “Our experiences in our former homes in Hawaii, Nevada, and Utah have given us so many stories to share.” She smiles, recalling her exotic bird rescue in Hawaii, which earned her the nickname “Bird Woman” among locals.

Finding the right facility that will foster an abandoned animal can be a daunting task to someone unfamiliar with the network of rescue organizations, says Dennis.

For example, within the dog rescue community, there are both breed-specific as well as all-breed rescues. As the name implies, breed-specific rescues save purebred dogs such as Boxers, Dalmatians, German shepherds, and Labrador retrievers, and are supported by a network of national organizations devoted to saving that breed. Other non-specific breeds can be served by local rescues like C.A.R.E. in Ruskin, which has an excellent reputation of quality care and is one of the few “no-kill” shelters in the area.

Dennis advises anyone wishing to get involved in animal rescue to delve into the wealth of resources on the Internet, including his own Facebook pages and blogs. Another good resource is Petfinder.org, an online database of more than 13,000 shelters and adoption agencies across the U.S., Canada and Mexico.

The American Kennel Club also maintains an online list of contacts, with information on breed rescue groups in the U.S.

Contributing to the cause of animal rescue is not only life-saving to animals but can be a joyful and rewarding experience for volunteers, regardless of age or experience.

For more information on animal rescue organizations, please contact Dennis Lubrano on Facebook, or at dennislubrano@gmail.com; or call C.A.R.E. in Ruskin, at 813-645-2273.