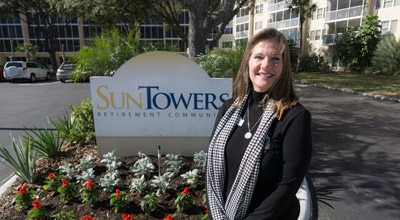 Debbie Caneen of SunTowers in Sun City Center was an attendee at the decennial White House Conference on Aging. Mitch Traphagen photo.

The White House Conference on Aging is a gathering of experts and professionals to help shape the course and improve the lives of the nation’s seniors — and soon-to-be seniors, which effectively envelops everyone.

The conference is held every 10 years through regional committees. Forty years in the making, the bottom line of the conference is to prepare the nation, the citizens and the economy for what could be a looming crisis.

As the enormous baby boom generation moves into retirement, everything from health care to financial needs will soon be taxed in ways that this nation has never seen. The goal is not only to be prepared but to make life better.

For the first time since the first conference held in 1961, Tampa was included in the short list of regional conferences around the nation. High-level actionable work is expected from the attendees, ranging from insurance executives to representatives from AARP.

Debbie Caneen, the director of admissions for SunTowers in Sun City Center, was included in the invitation-only conference that was live-streamed to the public via the Web. It would be hard to imagine a better choice.

Caneen, a passionate and highly dedicated advocate for seniors, is actively involved in their needs, not only through her job but also in her heart. Caring for the nation’s aging parents and grandparents is more than a mere job to her.

“It was amazing,” she said of the conference. “For us, the common thread was that seniors are currently too isolated. One person said that if you take anything away from this, we need to help seniors be less isolated.”

Isolation among seniors can lead to a whole host of problems, from ill health to dementia. Caneen took that concept one step further, advocating for a way to help seniors avoid isolation due to a common malady: hearing impairment.

“One thing that I brought up was Medicare should really pay for hearing aids. Without hearing aids, people are isolated, and that can lead to dementia. If we could just make that one change ….”

Dementia is at or near the top of the looming crisis of aging Americans. Modern hearing aids are highly effective but also expensive. They are not, however, nearly as expensive as caring for people in specialized memory-care units, facilities that are needed when dementia sets in.

“They are building memory-care units as fast as they can, everywhere,” Caneen said. “One thing to consider is giving home caregivers tax breaks when taking care of loved ones in their homes. These people need some help somehow. A tax break could allow them to get someone in to help.”

Caneen also summed up the problem. It is not a political one, although government funding to find solutions to looming problems is required. It is a problem for everyone.

“I think this is something that we all have in common. We all have parents and grandparents,” she said.

During the conference, Caneen also advocated a specific objective of removing the requirement of a three-day hospital stay before therapy will be covered.

“They don’t always need to be in a hospital that long, but they do need therapy,” she said. “They are putting rules and regulations before actual need.”

Among her other inputs were to decrease the paperwork and bureaucracy and increase the use of technology that already exists in order to stretch what funding is available.

She said she would like to see the process become far less complicated and burdensome for the elderly.

“There are so many rules, there are so many layers. It’s an overwhelming nightmare — especially if you are in your 70s,” she said. “We discussed the fact that we need to re-evaluate the whole system. There is a lot of technology that can be applied that can help. There is the potential for a lot of change.”

Given the scope of the problem, change will not likely be cheap or easy — but as millions upon millions of baby boomers become seniors, change will happen, whether for good or ill. The conference was intended to ensure the former.

“I’m an optimist and I hope in my heart that both parties have this going on in their own lives so [that they] know the need,” she said. “This is not a political issue, but the funding has to come from the government. There are ways to save money, and make better use of those funds.”

Returning to the topic of senior isolation, Caneen talked about how the Lennard High School Robotics Club has developed a relationship with seniors at SunTowers. The seniors supply needed donations for the club to purchase supplies, and the students visit the seniors to demonstrate their robots and other creations. In the process, all involved are making a connection that is beyond value — those who will lead in the future learning something from those who led in the past.

Caneen is still hoping for more community involvement with ideas such as bringing in  younger people with iPads to let seniors view places in the past via Google Streetview.

“Everyone who participated in the conference came together, we had agreement and are working forward. We are making progress,” Caneen said.

It is progress that will be made, one way or another. Few people know that better than Debbie Caneen. In a decade’s time, when the next conference takes place, an entirely new generation of people will be approaching old age. Caneen’s input in a conference of experts and urgency, may well have improved their lives.