Making a Getaway from paradise 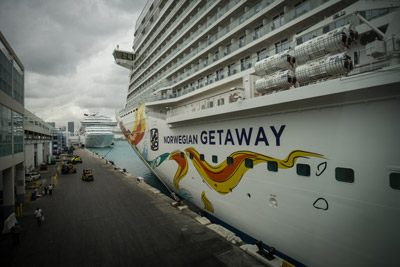 The Norwegian Getaway was just what my doctor ordered. Just because we live in paradise doesn’t mean we don’t need vacations from it. Mitch Traphagen photos.

My finger was hovering over the “Purchase Tickets” button on the JetBlue website while my wife was on the phone with a cruise line. Our desperation had been growing throughout the evening. What seemed so simple was suddenly not simple at all. And that was thanks, in part, at least, to the fact that Boston is buried in snow (to the degree that the mayor had to ask residents to stop jumping from their apartment windows into the gigantic snowbanks) and the temperature in Central Park in Manhattan had dropped to three degrees — a low America’s largest city hasn’t seen since the 1990s.

No matter where you may live in South Hillsborough, possibly even if under a freeway overpass, someone up North is envious of you. The northern winter began gently but has since turned fierce, and people are desperate to flee. And yet just because we live in Florida, the North’s wintertime vacationland, doesn’t mean that we don’t take vacations as well.

With a literal assault of blizzards and dangerously freezing cold up North, you’ll have to get in line behind Tigers, Phillies, Red Sox and Yankees fans to get much further than your own backyard.

A case in point? A chain motel off a major highway in Florida City is currently charging $228 per night. 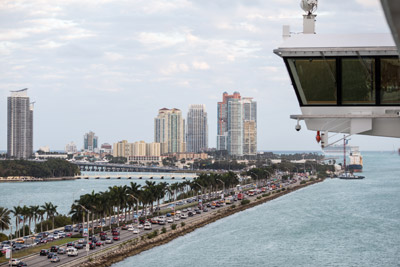 Traffic backs up into Miami Beach as millions of people flock to Florida to escape winter. There is no better way to beat the traffic than aboard a cruise ship, such as the 1,068-foot Norwegian Getaway.

Yes, in Florida City. Not exactly most people’s idea of paradise — but it also isn’t three degrees with blowing snow.  A charming, older, 1950s beachfront motel on Sanibel that we used to sneak off to for $70 a night now tops $325 per night — on the rare nights that a room is actually available.

So Michelle found a cruise with a well-known cruise line. Unfortunately, it departed from San Juan, Puerto Rico and disembarked in Port Canaveral. And that’s where JetBlue and a healthy balance of frequent flier miles came in. For next to nothing, and in less time than it would take to drive to a Holiday Inn Express in Florida City, we could fly from Tampa to San Juan. From there, a short cab ride would take us to the ship for a cruise back to Florida.

But in our growing desperation, Michelle had read the cruise date wrong. For a few moments, it appeared as though the stars had aligned for an epic adventure but nothing aligned. Sure, we could fly to San Juan, but there would be no ship waiting for us. Sadly, I hit the “Cancel” button on JetBlue.

It is not possible to describe the impact of brutal winter weather. Imagine making yourself immobile by painfully pulling on layers of wool over drying and cracking skin. Imagine not feeling your fingers or toes — and knowing that relief could be weeks or months away. Imagine air so cold that it hurts to breathe. And thus, it is not possible to describe the desperation that ensues. Last week, the tourist bureau of Ithaca, New York, actually surrendered to winter on their website, advising people that this winter has been unbearable and if they really want to go somewhere, they should head for the Florida Keys. It was a message that was noted and respectfully appreciated by the tourist bureau in the Keys. But as a result of all the fleeing, lodging is expensive, lines are long and lots of people with cracking skin are gleefully wearing shorts and T-shirts, even when the temperature in Florida dips into the 60s.

A few years ago, I spent considerable and an enjoyable time interviewing Peter Max, one of America’s (and the world’s) most iconic living artists. During our discussion, he mentioned having a relationship with Norwegian Cruise Lines. A relationship in that he actually painted one of their ships, the Norwegian Breakaway. Yes, the ship. No small feat. He spoke in glowing terms of how much he enjoyed the challenge of having a cruise ship for a canvas and of his association with the company.

I made a mental note to try a Norwegian cruise someday. After all, one of the benefits of living in Florida is that cruise lines are literally right in our backyard. When last-minute cabins come available, we are all right here to take advantage of them, while the Phillies fans are still on the tarmac waiting for their planes to be de-iced.

By late that night, we had given up. Those desperate to escape from New York (or Boston or Philadelphia) had beaten us. It was becoming clear that there were few options left to vacation in our own state. It’s hard to complain — in my yard it is 73 degrees — warmer than most people in the city are able to afford to keep their homes. But still, just because we live in paradise shouldn’t prevent us from getting away from it all. 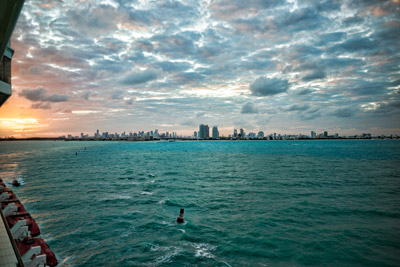 And that’s when an email from Norwegian Cruise Lines arrived. With many thousands of flights canceled over the past few weeks, there were some last-minute openings. It turns out that sometimes, if you want a winter escape, there is no better place than Florida to live. Meanwhile, somewhere, perhaps at LaGuardia or JFK or Boston’s Logan airport, a plane is being de-iced. But in Florida, an escape via a cruise ship, to me the best of all possible “get away from it all” vacations, is waiting, just down the ice-free road.

And at the end of that road is a ship named the Norwegian Getaway. Ironic, perhaps, but in the clear Florida night sky, the stars aligned for … a getaway.