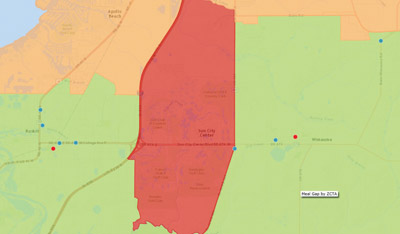 Hunger is a problem for some Sun City Center seniors, according to the Hunger Gap Map, a new report from the Tampa Bay Network to End Hunger.

The map pools data from federal, state and local agencies as well as South County food pantries and paints Sun City Center in the middle of an area where many are experiencing hunger on a regular basis.

Neighboring Wimauma, home to thousands of migrant farm-workers and their families, is also tagged by the report as having problems keeping the wolf from the door but not as severe as those in Sun City Center.

It’s no surprise to Tom Bullaro, co-director of the Our Lady of Guadalupe food pantry in Wimauma.

Last year, the pantry served an average of 175 families a week. That has increased to 200, many of those seniors with homes along the pristine boulevards of Sun City Center, Bullaro said.

Many seniors are left in a financial bind when a spouse dies, Bullaro said.

“People think there is all this money in Sun City Center, but often when the male spouse dies the money is gone.” That leaves the surviving spouse with bills that “eats their money right up.”

Anecdotal reports also back up the report’s findings.

Talking to friends in a volunteer rescue squad serving Sun City Center several years ago, Bullaro heard stories of seniors who were struggling to put food on the table. “They told me they would find homes with very little food in the refrigerator and cat food when there were no cats in the house.”

Bullaro tried to get the word out about the Our Lady of Guadalupe food pantry as best he could from church bulletins to word-of-mouth advertising. As a result, seniors are not as reluctant to use the pantry today.

Pride plays a part in a senior’s reluctance to use food pantries, Bullaro believes. “It’s a stigma,” he said.

The Hunger Gap Map includes data from Feeding America Missing Meals analysis. Compiled by Craig Gunderson of the University of Illinois, a national expert, the report showed its findings on a county-by-county basis,

Caitlyn Peacock asked that he break that data down further by census tract. Census tracts are small subdivisions of a county that are updated by local participants before each decennial census as part of the Census Bureau’s Participant Statistical Areas Program.

“The more you hone down on a block-to-block level, the easier it is for people to get a sense of what is going on,” said Peacock, the report’s author, a project coordinator with the Tampa Bay Network to End Hunger. Data from local pantries, Meals on Wheels of Tampa and Hillsborough County Family & Aging Services were also used in the report, Peacock said.

Bill Cruz, executive director of Wimauma’s Good Samaritan Mission, knew issues other than hunger loomed larger in his area five years ago. While many in the Wimauma area fight hunger with the aid of government benefits, Cruz’s own research of federal, state and county records told him that illnesses like diabetes and high blood pressure plague the community more.

“This is what led us to change the direction of the mission to address those issues rather than say ‘Well, we have always handed out food, let’s continue to do that,’” said Cruz, a licensed family and marriage therapist with a degree from the University of South Florida. Also an ordained minister, Cruz took over at Good Samaritan in 2008.

The exhaustive report covers the entire Bay area from Keystone to St. Petersburg. Large swaths of St. Petersburg and sections of Tampa are also identified as areas where hunger is an issue. The map is also interactive, allowing viewers to focus on just one area of the county and to highlight meals missed by ZIP code, among other features.

The map is the brainchild of former Hunger Network chairwoman Pat Rogers, who also headed Feeding America’s Tampa chapter for four years. (Feeding America supplies about 80 percent of Bay area food pantries.)  A former executive, Rogers took her business savvy to the world of food pantries. Peacock helped collect data from area pantries and government agencies, something Rogers had already started, and turned that into the Hunger Gap Map.

Solutions to the hunger problem may appear daunting and beyond an individual’s efforts, but there are immediate actions a community can take to address the problem, Peacock said. “One of the more shocking things we are finding is that people only provide resources in places they can see poverty.”

Tackling the issue will take building relationships on the ground, said Peacock, who recently met with members of Hispanic Services in South County to set up a transportation program for those who don’t have access to it. She hopes to launch a pilot project soon utilizing church vans, many of which are used only on weekends, to transport those who need it.

For more information on how to help or to learn more, call Peacock at 727-488-1860 or email caitlyn.peacock@networktoendhunger.org. The Hunger Gap Map can also be viewed at www.arcg.is/18gNAN9.

Want to help South County’s hungry? Donate to the Have A Heart Caring Castle food drive. All donations go to area pantries. The drive is co-sponsored by JSA Medical Group, WFLA Ch. 8, The Observer News, The SCC Observer and the The Current. It runs through Feb. 27.