Home News Salvadore Dali — The journey of a madman
News

Salvadore Dali — The journey of a madman

Anyone who has ever taken a high-school Art History class is aware of the painting The Persistence of Memory by Salvadore Dali; and those who have had the good fortune of viewing any of Dali’s paintings in person know that it’s an entirely different experience than seeing a reproduction in a book.

If you live anywhere in the Tampa Bay area, there’s no reason not to have that experience.  Thanks to the wondrous Dali Museum in St. Pete, designed by architect Yann Weymouth, following the journey of the self-proclaimed madman couldn’t be easier … or more enjoyable.

Salvadore Dali (1904-1989) is best known for his striking and bizarre images in his surrealist work.  He produced more than 1,500 paintings in his career, plus hundreds of  illustrations, lithographs, theater sets costumes, sculptures and even an animated short film for Disney.

The Dali Museum is rich in artworks from Dali’s entire career, including 96 oil paintings as well as scores of original drawings, bookworks, prints, sculptures, photos and manuscripts. Founded with works collected by Reynolds and Eleanor Morse, the museum displays the massive paintings over which Dali labored in the last decades of his career. 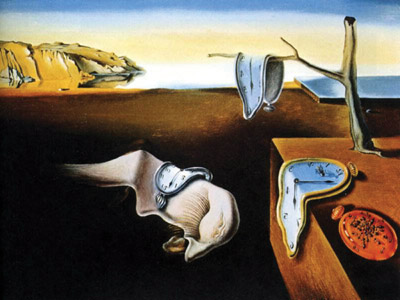 The Persistence of Memory by Salvadore Dali, dated 1931.

On permanent display, you will see The Average Bureaucrat, The Discovery of America by Christopher Columbus, The Disintegration of Persistence of Memory, The Ecumenical Council, The First Day of Spring, and The Hallucinogenic Toreador, to name a few.

Dali was a highly skilled draftsman, his painterly skills often attributed to the influence of Renaissance masters.  In 1931, Dali painted his famous work, The Persistence of Memory, which depicts an image of soft, melting pocket watches, evoking the notion that time is fluid, not rigid or fixed as is generally assumed.

Dali first came to the United States in 1934, and the New York exhibition of his works, including Persistence of Memory, created an immediate sensation.

Dali was highly eccentric and enjoyed displaying unusual and grandiose behavior.  His attention-grabbing antics sometimes drew more attention than his artwork, to the dismay of his serious art critics who held his work in high esteem. 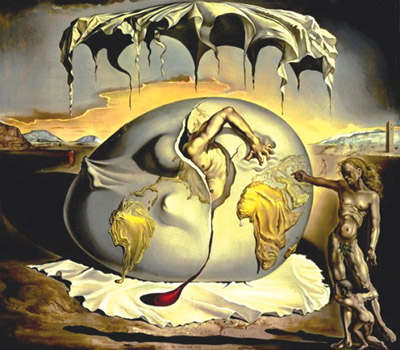 On display at the Dali Museum is Geopoliticus Child Watching the Birth of the New Man, dated 1943.

In Dali’s later years, young artists such as Andy Warhol proclaimed him an important influence on pop art, as he began incorporating optical illusions, negative space and visual puns in his work.  Dali had a fervent interest in natural science and mathematics, incorporating the helical shape of the DNA molecule, rhinoceros horn shapes, and the tesseract (a 4-dimensional cube) in many of his paintings.

He had a glass floor installed in his studio, enabling him to study foreshortening, from both above and below, which he used to create dramatic perspectives of figures and objects in his paintings.

The Dali Museum in St. Pete is a work of art in itself, combining a simple rectangular structure with a large free-form geodesic glass bubble known as the Enigma. The Enigma, which is made up of 1,062 triangular pieces of glass, stands 75 feet at its tallest point, and mimics the dome that tops Dali’s museum in Spain.

Inside, the St. Pete museum features a helical staircase, recalling Dali’s obsession with spirals and the double-helical shape of the DNA molecule. Visitors arrive at a landing with a view of the gardens and waterfront through the Enigma.  The effect is nothing short of breathtaking. 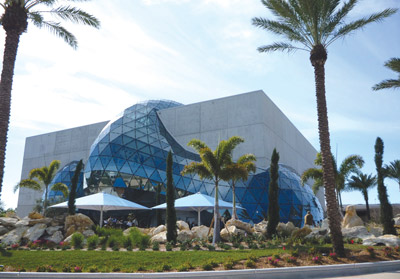 The Dali Museum in St. Pete is a work of art in itself, combining a simple rectangular shape with a large geodesic glass bubble known as the Enigma. lisa stark photo / lisastark.com

Outside on the waterfront, visitors can enjoy the Dali Garden, a unique environment of learning and tranquillity. They can also shop at the Dali Museum Store, featuring the largest collection of Dali-inspired merchandise in the world or enjoy a Spanish-themed light lunch at the Café Gala, named in honor of Salvador Dali’s wife, Gala.

Currently the Dali Museum is featuring a special exhibition titled Picasso / Dali, featuring rarely loaned works from more than 20 international art museums and private collections and pairing these two legendary artists. More than 80 works are on display now through February 22.