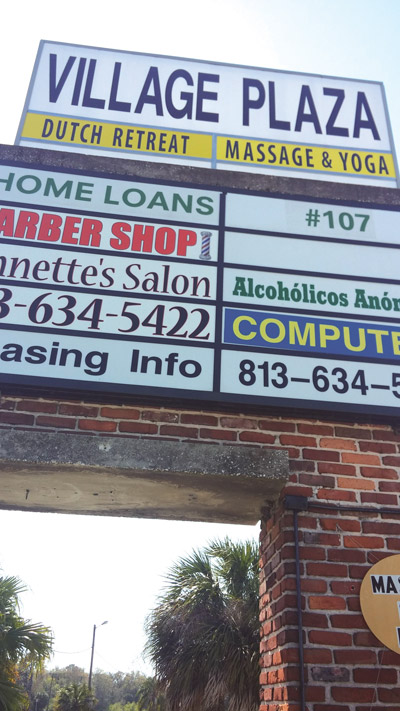 Business owners in Village Plaza at the corner of U.S. Highway 301 and Sun City Center SCC Boulevard will have to vacate the strip mall by March 14. Kevin Brady photo.

Business owners at a popular strip mall on Sun City Center Boulevard have been told they must vacate the premises by March 14 amid speculation about whether an Aldi’s discount supermarket or Hess gas station would be rising in their place.

The landlord for Village Plaza, Frank Diehl Farms of Wimauma, refused to comment on any impending sale of the property or to verify reports that tenants had been asked to move, but business owners confirmed receipt of a Jan. 14 letter saying they had 60 days to leave.

The broker for the property, meanwhile, would not reveal what business would be taking over the plaza, but he did say it would not be a Wawa, an Aldi or a gas station.

All speculation should come to a halt Thursday, Feb. 19, when the plaza’s new occupants are expected to be announced.

The plaza, at the corner of U.S. 301 and S.R. 674 (SCC Boulevard), is home to a jewelry store, a barber shop, a pet grooming store, a golf-cart sales and repair shop, a TV repair shop, a beauty salon and a Spanish-speaking Alcoholic Anonymous meeting hall. There are also several empty storefronts in the plaza.

“It was a hit. No one really expected it,” said Raymond Rocha, manager of Ray’s Golf Carts Sales and Service, which moved to the plaza in 2009. “We had heard rumors but we didn’t get the notice until a few weeks ago. Everyone in the plaza was told they have to leave.”

“I was here when the landlord came in and gave us the letter, and he told us it is not going to be a Wawa store,” Rocha said.

Lamenting they had only 60 days to move – “It’s not good,” Rocha said – Ray’s plans on moving back to its original location behind Burger King on Sun City Center Boulevard.

Gordon Dimmock bought Ray’s just two months ago and was “less than pleased” when he heard he would have to move. “We bought the business on Dec. 17 and as part of the process we took over the lease and assumed we were good to go. Now, to move, has cost us a small fortune.”

Speaking to other business owners in the plaza, Dimmock said it wasn’t a surprise to some. “I think they were expecting it.”

Some plaza business owners, faced with prohibitive moving costs, may close their doors permanently. “As far as I know, one or two of [the businesses] cannot afford to go anywhere else. It is a sad state of affairs,” Dimmock said.

Despite the moving cost, Dimmock is philosophical. “That’s life,” he said. “What can you do? At the end of the day, a business is a business, and if you sold your premises you can’t look after all your tenants. [The landlord] has a responsibility to his business.”

One businessman who calls the plaza home but did not want to be identified said he will now move on.

“We will just have to go wherever we can find some work,” he said. “Nobody wants to go, but it’s just what is going on now.”

The Clip and Strut Shop, Judy Rogers’ dog-grooming business, has called Village Plaza home for 26 years, among the longest-serving tenants in the strip mall.

She plans to move to All About Paws, a full-serve pet center in Riverview, about 4 miles north of the plaza on U.S. 301. The store, run by Sharon Roberts, serves the South County area as well as Brandon and Valrico.

The realization that she would have to move “took a week or two to sink in. It was really hard,” said Rogers.

“The landlord gave us a 60-day notice, which is fine,” she said. “If it has to be, it has to be. I am 64, so in a way I thought this is God’s way of telling me to slow down because I have been by myself there for a long time doing everything.”