Home News From a quiet community, one man builds unique ships a world away
News 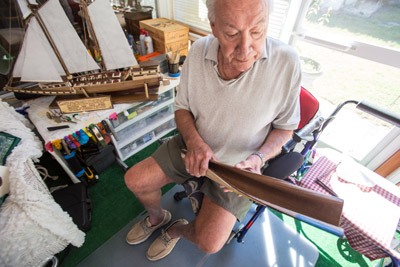 The palm tree husks, or pods, that Wolf uses are rarely symmetrical, making the deck-laying a challenge. Mitch Traphagen photos.

But the peace and quiet of Wolf’s surroundings speak little of his life. There were projects in Nigeria and then projects in Germany. There was Hong Kong and there are the stories of people in bars and in places few have heard about, let alone ever visited. In some ways, he is a man of mystery but — and again, despite his peaceful and manicured environs — the truth is that he is a man of the world. Upon meeting him, it seems as though he could likely walk into any bar or wayside joint in the world and be comfortable, and would likely have your back should trouble sprout up. He is a man of accomplishment and is comfortable in his own skin; modestly revealing hints of adventure, all while, more modestly, revealing remarkably little.

But you can see it in his eyes. You can hear it in his voice. 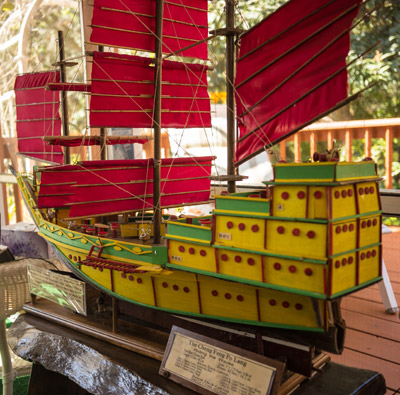 “I have been in Hong Kong many times and remember the thousands of sail boats with their very colorful sails. This particular hull turns up sharply in the bow and I immediately envisioned a Chinese junk when I first saw it,” Wolf said. A first-time author at 77, Wolf became a boat builder, using hulls from palm tree husks, at 78.

And speaking of accomplishments, Wolf, who is about to turn 83-years-young, has only recently added two accomplishments. Five years ago he became a published author, now with four books — soon to be five — to his credit. Four years ago, he became a craftsman and a boat builder, albeit an unusual one.

He spent his career as a civil engineer, building things around the world. Now he is building boats, in intricate scale, all emerging from a most unlikely source: coconut palm tree pods or husks. When he finds the pods, he has no idea what kind of boat he can build from it, not all are suitable to serve as a hull, and virtually all present engineering challenges, but over the past four years, he has built eight boats. They take anywhere from four to six months to build. Two of them are on display at Circles Restaurant in Apollo Beach.

Despite the engineering challenges and skills involved — and they are built with his knowledge of design and balance — Wolf had no idea he had the skills needed to build the boats until the tender age of 78, when a coconut palm pod fell near where he was standing while visiting Key West with his wife. Somehow, in what many people might see as detritus, he saw a ship’s hull. 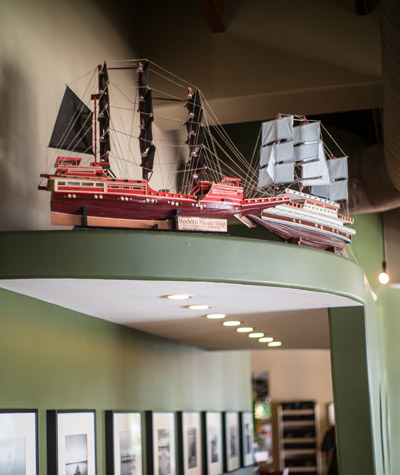 Of Wolf’s eight ships, only two are currently on view for the public: at Circle’s Restaurant in Apollo Beach.

“I just want people to know that this can be done,” he said of his unique, intricately detailed and beautiful works of nautical art. Asked if he was surprised at how the first one turned out, the response was an immediate, “Yes.” His statement covers so much — with the right attitude, such as that held by Wolf, age is no deterrent. With the right eye, anything can be … well, anything you can imagine.

He had to learn some of the basics of sailing ships as he went along. Now he knows about mizzenmasts and topsails. On one beautiful and large Chinese junk, he even went so far as to build in log shims for the ship’s cradle, much as it might appear in dry dock in a port in some far corner of the world.

“I’ve spent some time in Hong Kong and I’ve seen those boats, the Chinese junks,” Wolf said. “I liked the sails.”

Wolf’s eight boats have ranged in size from 24 to 55 inches in length. He said the deck is among the most difficult parts because the husks are generally not symmetrical, often lower on one side, wider on one end, and creating a challenge for a level deck. And until he lays the deck, he has no idea what kind of boat will emerge from the pod.

At 55 inches, the Chinese junk is his largest ship yet. From his time in Hong Kong, he recognized the husk’s potential when most people may have simply seen yard waste.

“This particular hull turns up sharply in the bow, and I immediately envisioned a Chinese junk,” Wolf said. 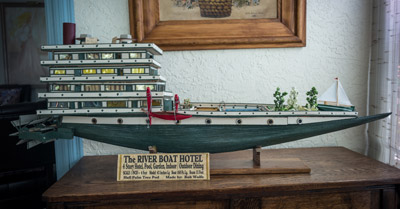 “People tell me that boat wouldn’t float. But the hotel part has a lot of empty space — and the swimming pool and the garden on the deck balance it out,” Wolf said. In building it, even if with a hull from a palm tree husk, it is built with the eye of an engineer and the heart of a man of the world.

It is a ship built to scale from a palm tree husk. In real life it would be 132 feet in length with a 33-foot beam. It has eight cabins above deck, including a three-story captain’s cabin, with more cabins below deck. It has four masts, flying red sails, with some furled, as if making way for an easier day at sea, plying the ancient trade routes with spices or, perhaps, patrolling and protecting those routes. Junks have been sailing the oceans since the 2nd century, and are still in use today.

On display at Circle’s Restaurant, just inside the dining room, are Wolf’s models of a pirate ship and a gambling ship. Both are approximately 43 inches long. Both are immediately recognizable among the boats built from kits on display alongside.

They are working ships, as they should be. There are lifeboats and tenders, all made from the same materials as the boats themselves. There are deck fixtures and even a bar or two serving drinks. 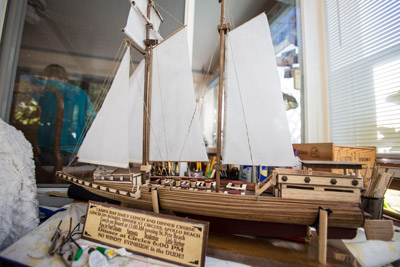 They are built with the eye of an engineer, and thus are sound in design, but also with the hidden eye of a modest romantic. A first-time author at 77, now finishing his fifth book, and a boat builder at 78, Bob Wolf is a talented man of the world. And on a quiet street in a quiet community, he can likely be found sailing that world, perhaps on a Chinese junk or a tall ship off the coast of Africa, eyes out to sea with one arm on the ship’s bar, open to adventure while hearing stories for new books and, perhaps, sharing a few of his own.