By KEVIN BRADY and PENNY FLETCHER

Organizers of a high-speed ferry that would link South County and the other side of the Bay are asking residents to support the project and to send emails backing the venture to county commissioners.

Commissioners will decide at their Feb. 18 meeting whether Hillsborough County will go to the next step in the project.

“This is a good and positive thing,” said the Tampa Bay Citizens’ Committee for High Speed Ferries in a statement. “[It is] an opportunity to urge our County Commission to lead, and make it a priority to have ferries running by 2018.”

The letter then urges local residents to email commissioners, encouraging them to back the project. Commission email addresses and phone numbers are available on the county’s website, www.hillsboroughcounty.org. Once there, click the “government” tab at the top of the page and follow the links to “board of county commissioners” and “contact your commissioner.”

The proposal begins with two catamarans that would run between the Schultz Preserve area and MacDill Air Force Base, with the first anticipated riders being the 5,300 MacDill employees who commute between 25 and 35 miles daily across the Bay.

Fernandez said, “The survey shows that 87 percent say they would use it. Eighty-six percent drive alone now, so that would get a lot of cars off the roadways.”

The two catamarans would begin the six-mile straight-across service approximately every 20 minutes from 6 to 9 a.m. and resume from 4 to 6 p.m. for MacDill employees, then add to the service as others signed on, Fernandez said.

A third catamaran would be added later for public use if the venture proves profitable, Fernandez said.

Surveys indicate there are 1,750 people in the Riverview/FishHawk area; 1,096 in the Alafia area; and 1,181 in Ruskin and Apollo Beach who would be potential ferry riders immediately because of their place of employment.

“It’s an ideal situation for us with so many people leaving from a similar place going to a common destination,” Fernandez said. 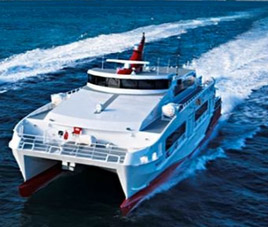 A possible-style boat in the ferry proposal.