Save the date for SCC FunFest: March 21 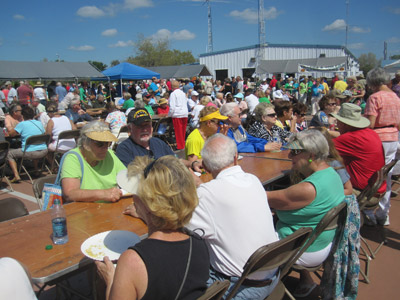 The 2015 Sun City Center  FunFest Committee, chaired for the third year by Susan Muise, is in full swing planning for FunFest.  They set the date — March 21 — and the time: 9 a.m. to 2 p.m.  Note that the ending time is an hour earlier than last year.

Registration letters have been sent to business vendors and the more than 150 Community Association clubs, advising them that they need to commit by Feb. 13 to reserve a spot.

Lynn Murphy is again organizing the Health Fair, which is extremely popular. She is busily contacting potential participants who wish to have displays in the Atrium’s Caper and Horizon rooms, as well as the vendors who will be located in the parking lot on the west side of the Atrium (VA, Eye Associates, Bloodmobile).

If you were at FunFest last year, you saw some changes in arrangement of the business and club tables in the gazebo area and relocation of the Main Tent to the south side of Cherry Hills. The committee was pleased with the improved flow, so they are keeping that arrangement this year.

This is the 16th year for the SCC FunFest; the first one was held in 2000, with Walt Cawein as chairman. Most of these events over the years have had a theme, but last year’s committee decided that since the overall theme is FUN, a second theme was redundant.

Thousands gather on the CA’s Central Campus each year to enjoy the continuous entertainment, club displays and food. It’s just plain FUN, so plan to be there March 21.