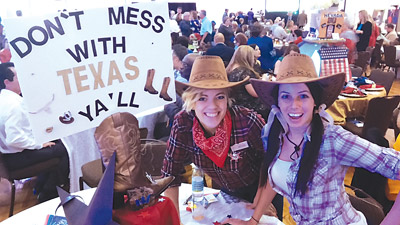 More than 300 of Riverview’s best and brightest turned out last week for the Greater Riverview Chamber of Commerce annual awards dinner.

“In my opinion, this was our best ever annual dinner and awards celebration,” said Tanya Doran, executive director of the Chamber. “I am looking forward to what we come up with for 2016, especially since it will be the Chamber’s 50th golden celebration.”

Celebrating with an “America the Beautiful” motif, tables at the dinner were bedecked with emblems of each state and U.S. territories, all the work of the table’s participants. From the Federated States of Micronesia, decorated by staff from Hillsborough Community College’s Riverview campus with a tropical flair, to the cowboy theme at the Texas table, there was no shortage of color at the event, which was held at The Regent in Riverview on Jan. 16. 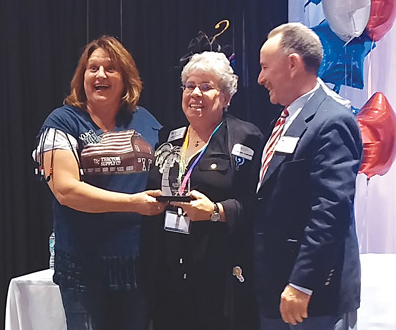 Tammy Holmberg, the 2013 Riverview Citizen of the Year, hands over the 2014 award to Jill Andrew as 2014 Chamber president Joe Eletto looks on.

Among the award winners were:

• Citizen of the Year — Jill Andrew

Perhaps the loudest cheers of the evening came for the Business of the Year Awards. Divided into three categories, the awards were handed out for companies with three or fewer employees, those with up to 20 employees and those with more than 20 employees.

James J. Pulkowski, CPA, took home the small business award for a company with three or fewer employees. Pulkowski was up against Huth & Booth Photography and Pearson Capital.

“Considering the other two great companies that were up for the award, I was quite surprised,” said Pulkowski. “The Chamber has been good to me so I just try to help out where I can.”

Waypoint Property Inspection netted the award for a firm with up to 20 employees, besting Riverview Mortgage and Suncoast Credit Union. 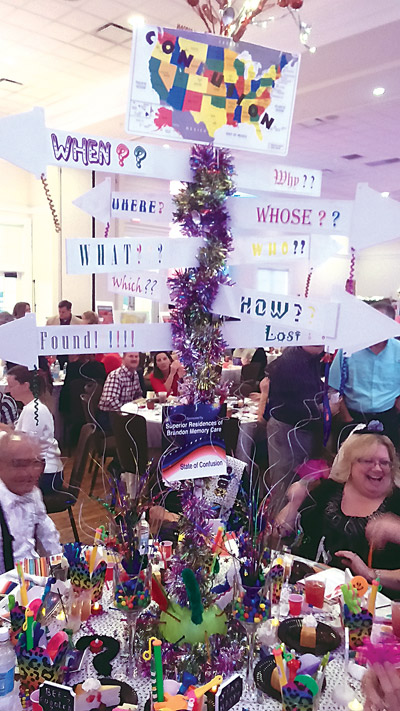 With each table decorated in the symbols of a state or U.S. territory, the aptly named “State of Confusion,” created by Superior Residences of Brandon, took home first place for the best-decorated table.

“It was a recognition of taking the next step with the business as far as going from a one-man operation to a small business with several associates and also taking a big step to being a part of and contributing to the community,” said Bob Hintze, Waypoint’s general manager and founder. “I think all of the companies nominated were deserving.”

The Alley at SouthShore won the largest business category, which included Summerfield Crossings Golf Club and The Bridges retirement community.