This is the first in a series of profiles of groups who will benefit from the Have a Heart Caring Castle drive. 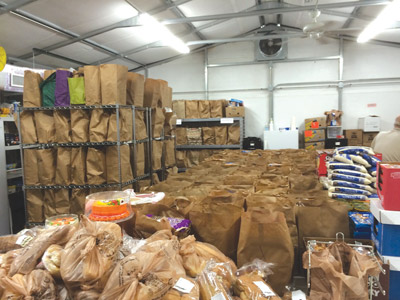 The Community Cupboard at Calvary Lutheran Church helps hundreds stave off hunger with its weekly food baskets. Above, some of the food the church gave out just before Thanksgiving last year.

The Community Cupboard, started with a small barrel in the foyer of Calvary Lutheran Church in Apollo Beach in 1979 to collect food for the needy who passed by the church on U.S. 41, has grown into an institution that hundreds rely on every week to keep the wolf from the door — or at least from the dinner table.

“It started on a shoestring, but it has just continued to grow,” said Mert Janovec, who has managed the Community Cupboard for three years.

The Cupboard distributes bags of groceries every Tuesday from 9 to 11 a.m. to an increasing number of hungry South County residents. The customers cover every ethnicity and age group, Janovec said, from those who can’t afford to feed their families to the elderly who often have to decide between food and medicine.

Referring to Tuesday, Jan. 20, Janovec said: “Last week, we distributed 378 bags of food, one bag per person.” He said “the number of those served is “continually going up. When I started three years ago we usually didn’t hit 200 for the week. The need has just continued to grow.”

The Community Cupboard moved to Ruskin in 2005, sharing a small trailer with another Calvary Lutheran mission, Angel Attic Thrift Store, on 25 acres purchased by the church for future development.

In addition to regular donations from the Calvary congregation, the Community Cupboard receives food donations from area churches, grants and the annual U.S. Postal Service Stamp Out Hunger Food Drive, held on the second Saturday of May every year.

Proceeds from sales at the Angel Attic are also used to purchase food for the Community Cupboard. Both ministries are maintained by a dedicated group of volunteers.