South County opened its hearts and wallets for last year’s inaugural Caring Castle, donating more than one ton of food — 2,600 pounds — for six area food banks. With more sponsors and publicity this year, organizers are hoping to exceed that total.

“I am expecting big things with all the extra publicity this year,” said Rosie Korfant, activities coordinator at JSA Medical Group of Sun City Center, who pioneered the effort last year. “It’s just a blessing this year for all these groups that will benefit. It’s going to be fabulous.”

While food banks are seldom short of donations during the holidays, it’s after the holidays when they sometimes scramble to keep the shelves stocked. The Caring Castle drive hopes to fill that gap, said Korfant when she launched the drive.

The Observer News is backing the effort with design, print and editorial support and will also provide weekly updates in The Observer News, The SCC Observer and The Current on the amount of food collected and feature stories on the groups benefiting from the effort.

Winn-Dixie also plans to make donating even easier this year by placing large barrels outside its Sun City Center store where anyone can drop off items. The barrels were donated by Home Depot of Sun City. M&M Printing designed large wraps for each barrel.

“I want to do anything we can to give back to the community,” said John Custode, manager of the Winn-Dixie store.

“We are very excited to have Winn-Dixie and WFLA on board this year,” said Korfant. A veteran of the TV industry, she pointed out that February is one of two sweeps periods for TV stations, a time when they determine their ad rates for the year and airtime is at a premium. “Sweeps month is like gold, but WFLA Channel 8 was very gracious about allowing us airtime, and that was just the greatest blessing,” she said. 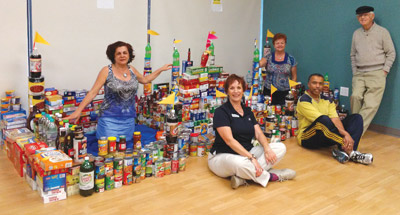 South County food banks benefiting from the effort will include The Lord’s Lighthouse, Our Lady of Guadalupe, Good Samaritan Mission, Beth-El Mission, Saint Anne Food Pantry and Life Church. New to the list of beneficiaries are the Community Cupboard of Calvary Lutheran Church and the Mary & Martha House.

“We are thankful to be a part of the Caring Castle program,” said Mert Janovec, manager of the Community Cupboard of Calvary Lutheran Church. “We feel very fortunate.”

Organizers plan to build a castle with donations, using canned goods and other nonperishable food stuffs as bricks. Supporters will redesign and rebuild the castle weekly as donations roll in.

What to donate and where

Donations of canned food and nonperishable foodstuffs are welcome again this year. Donations of diapers, personal hygiene products and paper products are being sought this year for the first time; they will go to the Mary & Martha House, the only beneficiary that is not a food bank.

Save the date for SCC FunFest: March 21