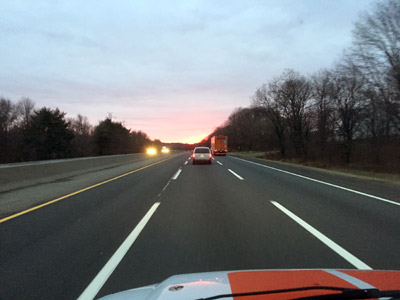 I’ve discovered one of the best things about growing older is that I can check things off an imaginary list — a list of things that I’ll never do again. One of them is self-moving. I’ll likely never rent a U-Haul truck again. There, I said it, and now it’s reality.

It’s not that I have anything against U-Haul; I like them very much, in fact. It’s just that I’m at a point in life where I don’t want to carry heavy things to fill a big, heavy truck and drive said big, heavy truck across the country. Or across town, for that matter.

In fact, I’m pretty much done moving at all. The next time we relocate, the words “big bonfire” come to mind.

At least our plans were good. We were going to pick up the moving truck on Sunday, hire a couple of kids with no necks to help us load it, and weave our way through one of the most densely populated parts of the country in an intricately timed freeway dance that would allow us to avoid rush-hour traffic through several major cities.

Of course, we didn’t plan on an ice storm hitting the city on Sunday. Apparently, until just shortly before, neither did the National Weather Service. The sidewalks and streets were skating rinks, and there was no way loading would begin as planned.

So we loaded on Monday. And we loaded and loaded some more. Every time Michelle told me that this box was definitely the last box, somehow another box would mysteriously appear. Since we changed schedule at the last minute, heavy-weight, heavy-lifting help turned into a nice but skinny kid with lots of questions about marijuana availability in Florida. I told him that I’m pretty sure that people get it, but I had no specifics for him. And still, my lack of cannabis knowledge didn’t deter him from later sending Michelle a text message offering to unload the truck for free if we’d give him a ride to Tampa. We decided to pass.

By 4 p.m., we were finally pulling out of the city, and my stress level was stratospheric. My original plans called for just missing the morning rush hours; now we were going to be well clear of the evening rush hours, and we were exhausted. And then it was about 60 miles out when I noticed that one of the tires on the four-wheeled rear axle of the truck had a completely bald spot among otherwise perfect-looking tread. At least that gave me something to obsess about…for the next 800 miles, until at a Georgia rest area and with the steel belt now peeking through so that I could no longer rationally risk the lives of people that happened to be behind the big truck when that tire exploded into heavy rubber and metal shards.

At least that experience was cool. We called U-Haul, they sent me a text message and asked me to click a link. That link sent our exact coordinates from my phone to U-Haul. Great technology, U-Haul! An hour later, a service truck pulled up with an older gentleman and a kid inside. The kid looked at the tire and said, “Yup, that’s gonna blow!” and did all of the hard work to change the entire wheel while the older gentleman was just that — a perfect (and smart) Southern gentleman who handed off the various tools and hoses to the kid. Twenty minutes later, we were moving again.

What wasn’t so cool had nothing to do with the truck — except for the fact that I learned that when a Maryland State Patrol officer lights up his car and pulls over your wife in the vehicle ahead: It is entirely possible to make a nearly 90-degree turn across I-95 heading into Baltimore in a U-Haul truck. Believe me, no one wants to mess with a U-Haul truck.

For the entirety of my tenure at this newspaper, I have been pro-law enforcement to such a degree that I have occasionally included a full-disclosure statement to declare my highly positive bias toward the fine organization that is the Hillsborough County Sheriff’s Office, and the HCSO District IV in particular. Their professionalism and competence is something that we can all be proud of — and most certainly should be thankful for. To a man and woman, they go to work each day willing to put their lives on the line for each and every one of us.

Unfortunately, if the officer who pulled Michelle over on I-95 is representative of the Maryland State Patrol, I certainly would never say the same about them. Here is Michelle, my approaching-middle-age wife, driving a plain vanilla 2000 Chrysler Voyager with three old dogs (two of whom can’t walk well) and two cats. She was driving five miles under the speed limit but by no means holding up traffic.

As she passed the patrol car, she noticed the officer shining a light and staring at her. She freaked out, thinking our old minivan was on fire or worse and hit the brakes. And then the patrol car lights lit the sky. He herded her directly across traffic  into an exit ramp just off of the screaming madness that is I-95, and I had to come to a near stop and make a near 90-degree turn on the freeway to make the same exit. Again, no one messes with a U-Haul. It also helped that everyone was freaked out by the apparent emergency actions of the patrol car.

Michelle described the officer as a very young man. He said he saw her drinking a beer. Michelle showed him her coffee that we’d picked up a few miles before. He didn’t believe her and demanded her license. Although I was sitting just ahead, getting out of the truck may well have been an invitation to getting shot, so I waited until she called to let me know what was happening. He walked back to the minivan, said he was giving her a warning, and literally threw her driver’s license into the car. She tried to ask questions but he ignored her and still accused her of drinking a beer. She was disturbed by his rude and aggressive behavior.

Not knowing what was going on, I fully expected that, given a middle-aged woman in a minivan filled with sleepy animals and a guy in a U-Haul were under command, so to speak, on a very busy freeway, he would be kind and concerned enough to escort us, helping us merge back into the I-95 traffic.

Those hopes were dashed when I barely caught a glimpse of the patrol car speeding away, kicking up gravel as he rocketed off, endangering who knows how many people in the process. We lumbered back onto the freeway, and two miles down the road we saw his car again, with another victim. Probably a senior citizen from upstate New York on the way to Florida, no doubt drinking a beer.

I later looked at the “written warning” Michelle received for NOT drinking a beer nor breaking any traffic laws at all. It was complete gibberish about ignoring a traffic signal. Really? A traffic signal on I-95?

The next day, in North Carolina, we saw an officer had pulled over a car and they were just getting ready to re-enter traffic as we approached. The officer briefly flashed his lights to ensure the car was safely able to enter the highway.

So a few things have been checked off the list. I’ve lived in the New York City metro. I’ve driven my last U-Haul truck. There are more, but you get the gist. It’s good to check some things off and call them done.

P.S. Thank you sincerely for the “Welcome home”s the past few days. It’s good to be here with you.