Almost There is almost here 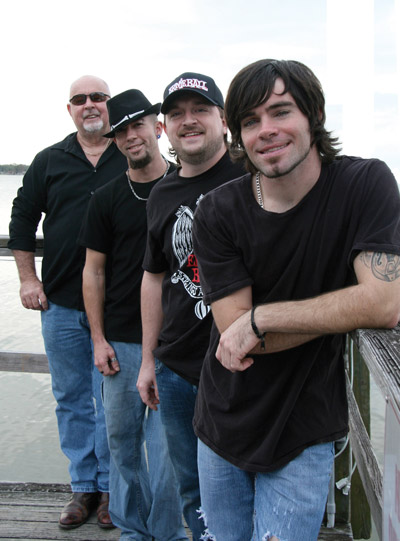 When you ask the members of Almost There to describe their band, they say “We’re just a bunch of local guys who love to play music.” But that doesn’t quite define the passionate energy you see generated by these four musicians at their performances, echoed by the ecstatic response of their loyal fan base. Hailing from Lakeland, the band comprises bass guitarist Tim Willis; his son, lead guitarist Chris Willis; drummer Ryan Hampton; and lead vocalist Travis Williams. Coming together a little more than 2 years ago, this young collaboration of talent (plus one Dad) is quickly becoming recognized as one of Florida’s most dynamic cover bands.

In addition to playing in small clubs in and around their home base — including The Lucky Leprechaun in Davenport, Old Man Frank’s in Winter Haven, and Ybor Cigar and Spirits in Lakeland — the band is also charting new territory in the Tampa Bay area. So far they have performed at such diverse venues as The Green Iguana in Ybor City and Westshore; Uncle Mike’s Smokehouse in Plant City; Quail Hollow Country Club in Wesley Chapel; Hula Bay in Tampa; Palm Pavilion in Clearwater; and the famed Hulk Hogan’s Beach Club in Tampa. They’ve also played at outdoor festivals and large biker events all over Florida. “We’ll play anything from small dives to big concert venues,” said lead singer Travis Williams. “We have fun wherever we go.”

Travis has been singing and entertaining since he was old enough to find a captive audience. Like many musicians, he started his career singing in the church choir and taking vocal lessons in middle school from a local instructor. His fellow band members also started at an early age. Ryan learned the drums at age 7, winning his high-school drum-off in his sophomore year. Chris remembers picking up his first guitar at age 11 and emulating his guitarist dad, never dreaming that one day they would be collaborating in a band together — or that he would be placing in national competitions like “Guitarmageddon,” sponsored by the music store chain Guitar Center.

To date, the members of Almost There have toured a sizable chunk of the U.S., together and individually, opening for bands like Kansas, Eddie Money, Craig Morgan, and LA Guns. They are also the $2,500 grand prize winner of the 2013 “Mai Tai Rumble” battle of the bands, held in Daytona Beach. Versatility is one of the secrets to the band’s popularity. Fed by a diverse interest in musical styles, the band tailors its performance to the audience at hand. “We like to get a feel for the crowd,” said Travis, “and we’ll play a wide range of styles. But we don’t just imitate; we put our own spin on everything we do.”

From classic rock to soulful blues to current hits, Almost There has a massive playlist, including favorites from Marvin Gaye, Stevie Wonder, Johnny Cash, Led Zeppelin, Bruno Mars, Matchbox 20, Luke Bryan and Disturbed. It’s rare to see this kind of talent paired with the down-to-earth modesty these musicians display. Band members can often be seen on their break partying with the locals, or hosting an open-mic night at one of the neighborhood pubs. But don’t be fooled by their “boy next door” demeanor. With their chemistry and skilled musicality, you’re guaranteed a night of electric entertainment. These guys can rock.

Water Ski Museum worth the trip.