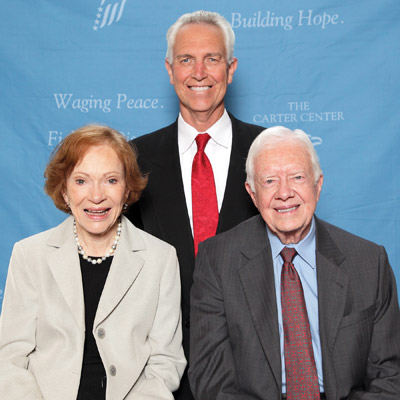 A former president is tipping his cap to Dr. Hal Ott for his charitable work in South Shore and Haiti.

Dr. Ott, president of the Ruskin Animal Hospital, was recognized by the Carter Center for “thinking outside the box” in raising funds and awareness for the Atlanta-based organization. Founded by former President Jimmy Carter and his wife Rosalynn in 1982 in partnership with Emory University, the Carter Center works to advance peace and health worldwide.

“The work of The Carter Center would not be possible without enthusiastic people like Hal who support the Center’s work and spread the word about it,” President Carter said. “He is truly an ambassador for peace, health, and hope.”

Commending his creativity in buying a brick and having it inscribed “The Carter Center” at Ott’s Off-Leash Dog Sanctuary, the philanthropic group’s newsletter credited Ott for “a fun way to pique the interest of the Florida community.” The sanctuary, open from 7:30 a.m. to sunset Thursday, Friday, Saturday and Sunday,  is currently selling hundreds of commemorative $100 and $150 bricks as part of a fundraising drive. 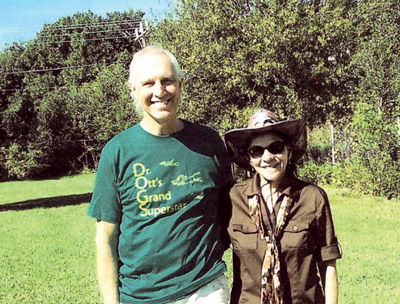 Andrea Rocca serves on the board of Ott’s Off-Leash Dog Sanctuary with Dr. Hal Ott, above.

The kudos couldn’t come at a better time for the dog park, which is gearing up for a fundraising carnival.

Ott founded the park in 2004, part of his promise to set aside an area for man’s best friend if he won the honorary title of Ruskin mayor. The free five-acre park at the corner of 21st Street SE and Third Avenue SE, is used by hundreds of dog lovers each week.

The carnival is expected to draw 2,000 pet lovers and will feature vendors, food, music and raffles as well as a pet fashion contest, silly pet tricks and a pet/owner look-alike contest. Sponsorship and vendor spots are available.

“Any business can be a vendor,” said Kelly Marishkanish, who is coordinating the event. “I think we get about $20 a week in donations, so this is to help with funds and raise awareness of the park.”

The park is a great place to “socialize, exercise and make a lot of new friends,” said Andrea Rocca, a member of the nonprofit sanctuary board who has been bringing her dogs to the Ruskin sanctuary since it opened. “It’s the best dog park in Florida,” she said. “It has space for the big and small dogs, although a lot of people bring their small dogs into the large dog area to socialize, too.”

Ott also helped found Ruskin’s Critter Adoption & Rescue Effort Inc. in 2000. The no-kill animal shelter for neglected, abused and unwanted cats and dogs on 27th Street SE is charged with reducing the number of homeless and abandoned animals through adoption, sterilization and education.

Uncomfortable talking too much about himself, Ott and his humanitarian endeavors come naturally, thanks to “winning the birth lottery,” he said. “I had great parents who were thoughtful and caring and taught me good values.”

Born in Pennsylvania, Ott graduated from high school in Pompano Beach, Fla., and went on to attend the University of Florida before enrolling in veterinary school at Auburn University. He served two years in the U.S. Air Force at MacDill AFB before opening the Ruskin Animal Hospital in 1971. The hospital employs three full-time veterinarians and a staff of 25.

While many would take the opportunity to put their feet up later in life, Ott, 71, still works at the hospital. “I enjoy it. I’m still mentally and physically able to do it, and it’s rewarding.” 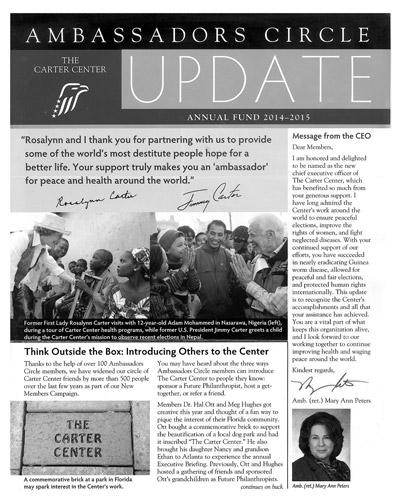 Kudos are given to Dr. Ott’s creativity in promoting The Carter Center by placing a commemorative brick at the off-leash dog park in Ruskin. This article featured the gesture in its monthly, national newsletter Ambassadors Circle.

Ott’s love of animals also took him to Haiti, where he was overwhelmed by the human suffering of the poorest nation in the Western Hemisphere.

“I went down there to help the animals and just saw the people and have been going there ever since. It’s just such a humbling experience,” said Ott, who has made numerous humanitarian trips to the Caribbean nation in the last 15 years. “It’s just a great feeling to give back to the world, whether it’s the local or world community. It’s just who I am, and I wonder why other people don’t do more. I have been blessed.”

None of this surprises Rocca. “He’s an outstanding man,” she said. “We have been truly blessed to know him. His generosity, love and compassion for mankind and our four-legged family members has graced and strengthened us. He’s just outstanding.”

Marishkanish concurred: “He has a huge heart.”

For more information on the dog park, visit Ottsoffleashdogsanctuary.com.

For more information on buying a commemorative brick, call Andrea Rocca at 813-645-1231.

For information on the Canine Carnival, call Kelly Marishkanish at 863-874-0084.