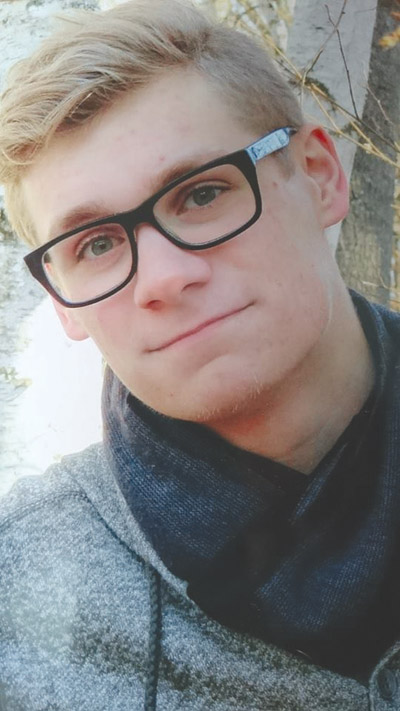 A Riverview family is hoping burglars who made off with a family laptop will return the computer, which contained the last photos of their son, who died just before Christmas.

Colin Edward Zurnieden, 21, was found dead Dec. 14 at his home in Moorhhead, Minn., where he was a senior studying communications at the state university. He would have celebrated his 22nd birthday Dec. 30.

“He was an amazing kid and loved by everyone,” said Colin’s dad, Jesse Petrowski. “You can go on his Facebook page and see hundreds of people who he has touched. My son was an amazing human being.”

Just hours after they returned home from a heart-wrenching trip to make funeral arrangements for their son Dec. 21, burglars ransacked the family’s home, taking presents, a large-screen TV, cellphones and Jennifer Petrowski’s work laptop, which held the last family photos of Colin. Jennifer is Colin’s stepmom.

“The robbery was crazy,” Jennifer said. “The dog needed to be walked, so I took her around the block.” Gone no more than 10 minutes, she returned to find “muddy prints on the rug and everything gone.”

Fleeing into the woods behind the family’s Carlsdale Drive home, the thieves left a trail of wrapping paper, dumping several presents and the family’s TV along the way. Despite a police search that included a helicopter, the burglars eluded officers.

“I just wanted to find these guys and tell them ‘I am on my knees and praying to God and now you are standing on my neck. You broke my heart.’ I just wanted to let them know what they did,” Jesse Petrowski said.

What happened next lifted the spirits of the family. 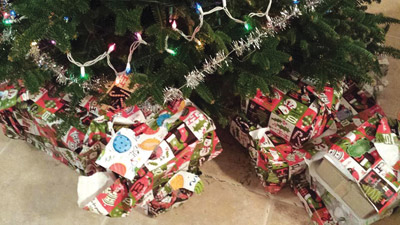 “The neighborhood kids came and helped wrap [the stolen presents] back up, and this is the beautiful result,” said Logan McGarvey, Jesse Petrowski’s stepdaughter. “So, as much as I want to give up on humanity, I just can’t, not when there are so many good people out there.” Photos courtesy of the Petrowski family.

Local children, hearing how thieves had added insult to the family’s loss, took to the woods, rewrapping presents that had been tossed aside by burglars in their haste to escape.

“When I was at my [lowest point] these kids came in with the gifts and asked for some wrapping paper and scissors,” said Jesse. “They wrapped the presents like little kids do, just so beautifully messy, and put them all under the tree.”

Christmas Eve also brought a knock on the door from a six-year-old neighborhood child. “She was standing there holding $2 in her hand,” Jennifer Petrowski said. “I asked her about it and she said, ‘It’s for you because people stole your stuff.’”

Other neighbors also rallied together around the family, giving the Petrowskis a gift card and candy.

Friends of the family also started a fundraising website to help defray the costs of the family’s trip to their son’s funeral in Minnesota. Hosted by gofundme.com  (search for “The Petrowski family) the site has already received $4,005 from donors. The goal is $4,500.

“I knew this would be a difficult time, so my friends and I thought the best course of action would be to raise funds for the family,” said Alex Fallon, who works with Jesse Petrowski at Busch Gardens. Fallon said he was “blown away” by the results.

“We originally had a goal of $500, but we surpassed that in 24 hours, and ever since then it just kept going up and up,” he said. “I know it will help a lot. I already dropped off some of the money [to the family] and they were overwhelmed.”

Returning home from his son’s funeral Dec. 29, Jesse Petrowski thanked all those who had helped the family.

“I’ve heard people say that when tragedy strikes people tend to get mad at God, and that is natural when processing grief,” Jesse said. “I’m not mad at God. I have only felt loved by my Heavenly Father. It was the miracle of everybody coming together to lift up our family. It is so tangible, this love. Thank you, everyone, for your words of encouragement, your prayers and your donations. Time is precious, we should measure it with smiles and not in years.”

Friends of the family can leave messages of condolence at an online guestbook at Legacy.com by searching for “Colin Zurnieden” on the site.

“Colin was charming, genuine, creative, caring and he fully embraced those who were lucky enough to know him. His sense of humor and sharp wit will be missed by all (along with the spontaneous dancing and the soundtrack of his life that played through a Bluetooth speaker everywhere he went). He made the most of the time that he was given and to know him was to love him.”