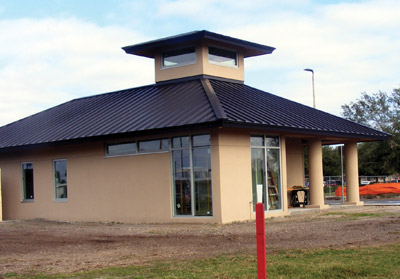 The new Sun City Center Information Center will be the first building visitors see as they turn onto North Pebble Beach Boulevard toward the main community complex. The building will not just be to help visitors find their way around but will also help existing residents find activities and other things for which they may request help. Penny Fletcher photos.

Happily, none of this will increase their dues.

“We have adhered to the ‘pay as you go policy’ with everything we’ve done,” said David Floyd, who has been in charge of the Building Committee throughout the project. By a vote of the nine-member board, Floyd will take the helm as Community Association, or CA, president Jan. 1.

The new buildings were paid for out of the Capital Fund, proceeds for which are collected by the CA on the resale of existing homes in the community in the same way that the county collects an impact fee for new homes built where no homes existed before.

The total for the project now in play is $2.9 million, Floyd said.

Planning began for this two-and-a-half years ago, and plans were approved by a community vote in 2013. The $2.9 million price tag includes not only the three buildings but also work on the parking lot that added 70 parking spaces for golf carts and 50 for cars.

The three new buildings will house the Information Center, Samaritan Services and a new multipurpose room. There was also an addition to the library.

Until now, the Information Center was housed in a home that was moved onto Cherry Hills for that purpose but has since been outgrown. Besides the current building’s size, community members showed by vote that they thought the Information Center should be the first building seen by visitors as they enter the community, thus making the present location unsuitable for the long run. 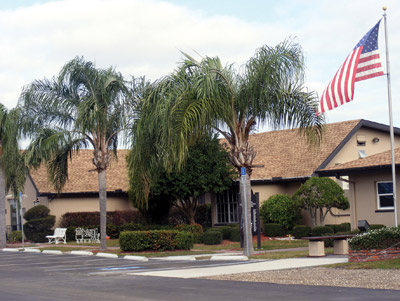 All the existing buildings at the Sun City Center Community Complex on Cherry Hills Drive and both Pebble Beach boulevards match the new structures that have recently been built.

Samaritan Services, although not an organization that falls under the umbrella of the CA, gives residents rides to doctors and other medical appointments; sponsors Meals on Wheels programs; gives Alzheimer’s support; and works with the group that gives support to caregivers of those who are affected by that ailment.

“Samaritan Services paid $250,000 to build the building, but it belongs to the Association,” Floyd said. “We have leased it to them for $1 a year on a 99-year lease. This is a good deal for them and a good deal for us because they do so much for us.”

The front of the new multi-purpose building will house the Mac Users Club and the Photo Club.

“This makes sense because the two groups work together on so many levels,” Floyd said. “Each of them has several hundred members and they use the same technology.”

The back of the new multi-purpose building will have a dance studio suitable not only for ballroom dance lessons but also yoga, tai-chi, and many other things that could now become available.

The three new buildings are due to open in March with an official ribbon cutting, said Floyd. Then, at the end of May, between $350,000 and $500,000, which has already been saved, will be spent from the Renovation Fund to completely modernize Community Hall on South Pebble Beach Boulevard.

This can be done without a community referendum because the money involved equals less than 15 percent of the budget, Floyd explained. (Requirements for referendum are included in Sun City Center’s Bylaws.)

“This renovation has been in planning for about a year,” he said. “The wood dance floor can only be sanded so many times before they can’t be sanded anymore, so there will be a new dance floor; we’ll be modernizing some of the tile; working on the parking lot; getting a new roof; and also upgrading the restrooms to new ADA standards.”

Besides complying with the American with Disabilities Act, the renovation will also address the stage, including its lighting and sound system.

Community Hall holds 840 people and is the location of the Friday night dances and many shows and fundraisers held by the CA and its individual clubs and organizations.

When Floyd steps up from heading new building and renovations to leading the CA Board, board member Chuck Collett will replace Floyd in charge of the CA Planning Committee and will lead the Community Hall renovation.