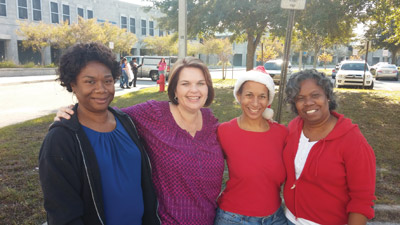 Students from Riverview High and Rogers Middle schools, along with hundreds of donors from across South Shore, made this Christmas special for local children who might otherwise have awoken Dec. 25 with nothing under their tree.

Parents on low incomes who qualified for the Toys for Tots program signed up for the event weeks ago, all preparing for the big day, Dec. 20, at Rogers Middle School. Serving Gibsonton, Riverview, Ruskin, Lithia, Brandon and FishHawk, the school saw some 1,080 families register for the event. The same event last year served 490 families from Riverview and Gibsonton.

Students, teachers and other volunteers all played Santa that day, with each parent redeeming a coupon for their children, and gift bags of toys were divided into gender and age categories in the school cafeteria. 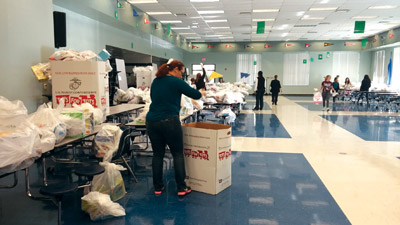 Meredith Scribner, Rogers’ assistant principal for curriculum, was among the many volunteers sorting gifts for children.

“Nothing brings out people’s true colors like volunteering and charity work,” said Michelle Battle, the community service coordinator for Riverview High’s Parent Teacher Student Association, or PTSA. “If I was an emotional person, I would cry,” said Battle. “It’s overwhelming and exhilarating to see the looks on the faces. We will have parents who get a bike, and they just break down in tears because it’s something they were not expecting to get.”

The toys were collected in specially marked Toys for Tots boxes distributed throughout South Shore in the run-up to Christmas with drop-off points in restaurants, post offices and supermarkets, among other places. Best Buy, Toys “R” Us and Walmart also set aside money each year to fund the program. As a result “some of the toys are identical because we receive cases and cases of toys from these businesses,” Battle said.

The donation boxes were then collected in early December and sent to a hangar at Tampa Airport, where each distribution center was allocated toys based on the size of the population it serves. Rogers Middle received 72 boxes of toys this year, each containing 55 toys, a total of 3,960 toys. Once at the distribution center, the toys were sorted by volunteers based on gender and age, packaging up bags of toys for individual children. Parents were given one bag per child. 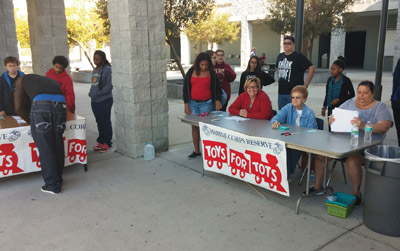 Volunteers from Rogers Middle and Riverview High manned tables at the Toys for Tots event, helping parents who had pre-registered through social service agencies.

Among the teachers and other volunteers helping out at the event were the Riverview High PTSA and Riverview’s Naval Reserve Officer Training Corps (NROTC). The Rogers Middle School Student Council and the school’s chapter of the National Honor Society also helped out.

Meredith Scribner, Rogers’ assistant principal for curriculum, was among those sorting the toys at tables at the school early Saturday morning as a steady stream of parents dropped in to collect toys.

“I honestly feel blessed to be a part of this, knowing we are helping some people have a better holiday,” Scribner said.

There is a real need for the program in Riverview, said Marilyn Dejesus, Rogers’ PTSA president.

“We have families in our school who are homeless, and the PTSA is helping them, starting from scratch, basically, with food and clothes.”

Kim (she didn’t want her last name used) was collecting toys for her children at the event. She said, “There’s a big need for an event like this because [even if it’s Christmas] we still have to pay bills and get groceries, so there’s not a lot of money left over to prepare for Christmas and buy gifts. It’s a really big help.”